For those not old enough to remember, the original BurgerTime was released in 1982 for arcades (arcades were rooms filled with TVs inside wood cabinets, and each TV was hooked up to a single game. Oh, and you inserted quarters in a slot in order to be allowed to play), and it was a 2D game that tasked you with avoiding 3 major enemies (Mr. Hot Dog, Mr. Pickle and Mr. Egg, the walking food), in order to assemble several giant burgers to clear the level.

You had to climb and drop from all available ladders, to make it to each burger layer, and trapping your food enemies within the burger layers allowed you to increase up your high-score. A top bun, lettuce, a tomato, a beef patty and the bottom bun made for a deliciously pixelated burger. We only had 6 levels to play, and once we reached the last one, we were looped back to level 1â€¦and we liked it! After all these years, Burger Time is back, and this time around, we are going on a world tour, to prove to all other chefs that Peter Pepper (that would be the chef you control) is the best one there is at making burgers.

BurgerTime World Tour is all about retro evolution. The fresh remix introduces burger stomping to a whole new generation of gamers who expect a greater diversity of gameplay fun!

â€¢ Fully 3D world, where you can see behind you and on the other side of the world, to figure out the fastest way to the next burger, or how to beat your friends.

â€¢ All new boss battles added to create a rewarding experience in beating each world.

â€¢ All new platforming gameplay added to make the game even more fun. New features like dangerous interactive platforms, rocket riding, new weapons, as well as the ability to pick up and throw your enemies everywhere!

â€¢ All new multiplayer modes! Simultaneous Split-screen and Online Multiplayer Modes for up to 4 players.

In single player mode, you can either choose to play on easy or normal difficulty. As you can obviously imagine, picking one over the other will make things easier or harder during your culinary journey, since enemy density will not be as high as usual and youâ€™ll get more power-ups when playing on easy. But you must also consider that, when playing on Easy, your score, the number of deaths suffered during the level, your best completion time and other stats will not be tracked. All of these stats are saved when playing the game in Normal difficulty, and you can earn several trophies by the time you complete the game if you obtain a good enough high score (you can tell if you did great since the game will give you 1 to 5 stars for the level AND it will throw lots of burgers under Peter Pepper, making him rise towards the upper half of the screen).

The game has the same basics as before â€“ you must complete the burgers to clear the level. IF you trap enemies between burger layers, you earn extra points, and the more enemies that are trapped between the layers, the harder that layer will fall, and this opens up the possibility of being lucky enough of trapping even more enemies when, say, the top bun falls on top of two pickles, which makes the lettuce fall two levels, trapping an egg or a sausage, making the whole thing fall straight down to the plate, in one swift move.

You can still use your trusty pepper to stun all enemiesâ€¦ and now you can now pick up enemies and throw them whenever and wherever you want! You can stun an enemy, pick it up and throw it on top of a burger layer, and then make the layer drop! Ah, did I mention you can jump? Late 20th century improvements, right in the 21st century! But be careful. Just like in real life, when you jump, pickles jump, as well! You have access to several Power ups this time around â€“ you can obtain a spatula to hit your enemies, a rocket so you can fly up, up and away, a speed boost, invincibility, etc. You can also collect all letters of the word BURGER for a big increase to your scoreâ€¦ but they are not available on all levels!

BurgerTime World Tour makes us remember simpler, old-school health mechanics from back in the day. Something touched you? Youâ€™re dead! Easy to remember, right? Avoid anything that is not a power up, a letter or a layer of the burger youâ€™re making. There are a lot of enemies in the game, and they all react differently to Peter, so be sure to learn their patterns in order to have a better chance at survival. To get you started, letâ€™s look at three of the enemies you will meet:

Guards certain areas; upon seeing the player, commits to a bull rush if not on a ladder and runs straight for the player.

Guards a certain area, mimics the players jump. When the player jumps the pickle jumps.

Hunts the player wherever they may be, can use ladders to get to player.

But wait, there is more! You must also avoid fire shooting out form burners, spinning drills that go up and down, moving platforms, trapdoors, rolling barrels, crushing elevators, floor installed drills, and other hazards that are out to get you. There are checkpoints on each level, which is a nice extra. If you touch them, you will spawn right there when you die, with all burgers intact up to the point when you got touched by a bad, bad ingredient! They come in handy when youâ€™re working your way towards the top layer of a burger, but get killed before you can reach it, as there is usually a checkpoint that will let you skip half of the trip back up there.

All levels are self-contained, and you can complete them in 1-10 minutes at most. The longest levels in the game are always the boss battles, since youâ€™re tasked with crafting burger after burger in order to come on top. Two of the four boss battles add a little something-something to spice things up, so be on the lookout for special cues that will let you know exactly what you need to do to triumph.

The game includes an offline multiplayer mode, and it also provides an online multiplayer mode. Up to four players can compete at the same time, either in split-screen or by the magic of the internets, trying to get as many points as possible while completing all the burgers available in the MP level while, at the same time, avoiding the other chefs and their nasty tricks! 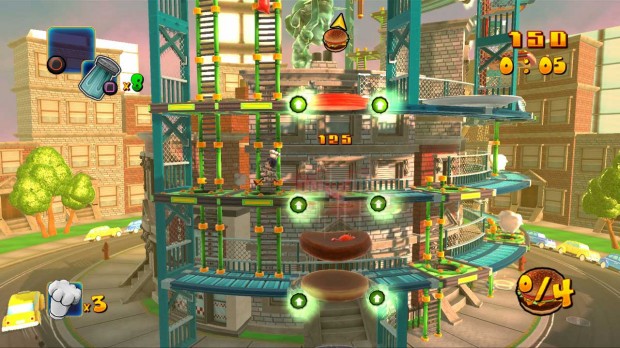 We are presented with several cutscenes in between some of the levels, which do their best to try and move the story along. Cliff notes version? You start to complete some burgers on the first level or two, then, suddenly, one of the Chefs will challenge you. They do this by way of a story printed in the newspaper (which youâ€™re reading on an airplane), and the challenge is for you participate in a burger duel, because the other chef says that his burger is better than yours. You fight, you win. Do this 4 times. Congratulations! Roll credits.

As mentioned before, when making a burger, the enemies you crush are added to the burger. Some combinations give you a special burger that in turn provides you with extra points. For example: Add some sausage to your burger, and you have an Italiano specialty! Discover all the new burger specialties that you can create! You should also remember that it is best if you always start to make your burger from the top bun! Every layer hits the one below, and then the one below, and so on. Each time this happens you get more points, and you have a great chance at trapping an enemy in between any of the lower layers when using this method! 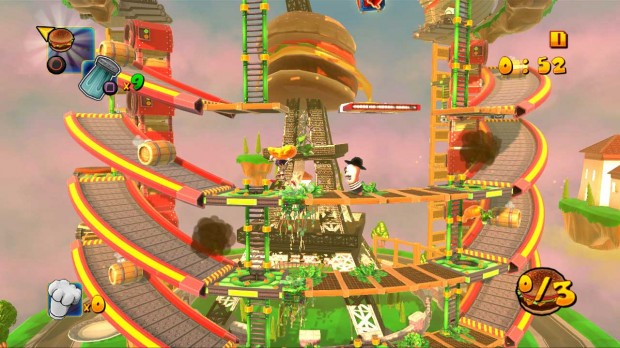 BurgerTime World Tour signals the return of a classic, and it does so in style. You will travel through 4 distinct locations, fighting against crazy food that is alive (accept, and embrace this!), and battling bizarre chefs that will try to end your reign as the top burger chef. There is a lot of content in the single player mode, and the multiplayer, both offline and online, will allow you to continue playing this well after youâ€™re done with the story mode.

[review score=”86″ pros=”BugerTime is back!
Easy to control” cons=”Finding an online match takes a while”]

This review is based on a PS3 copy of BurgerTime World Tour provided by MonkeyPaw Games.

The Walking Dead: The Game – The Trailer 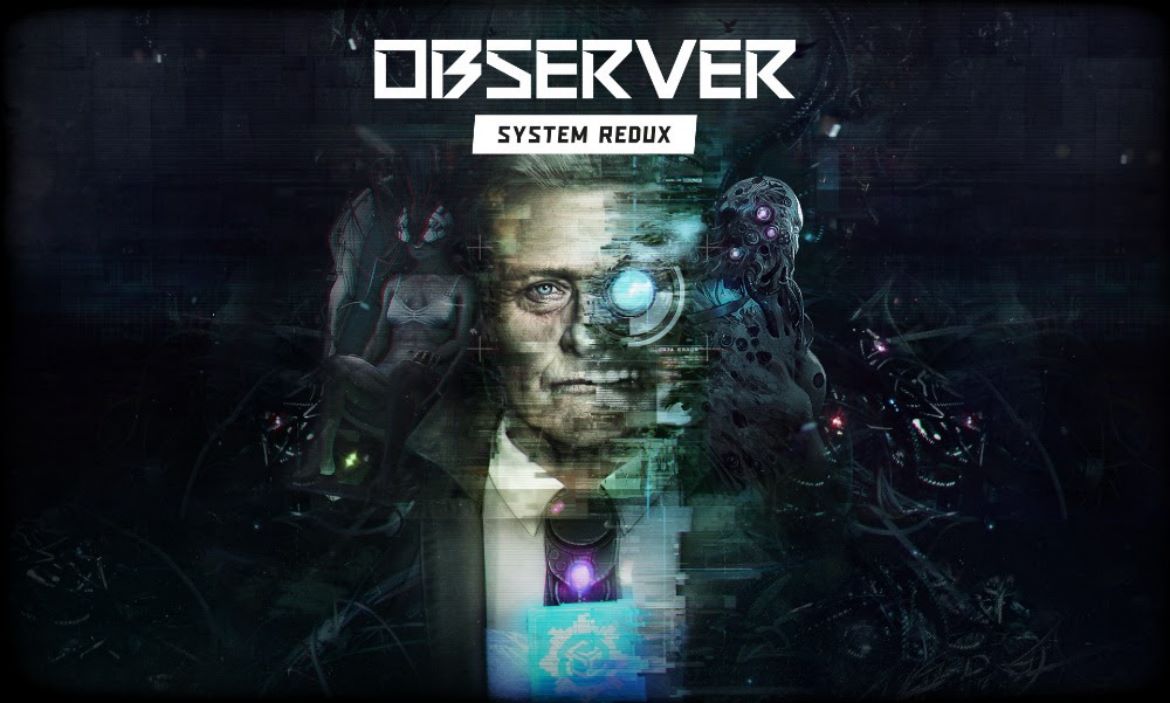 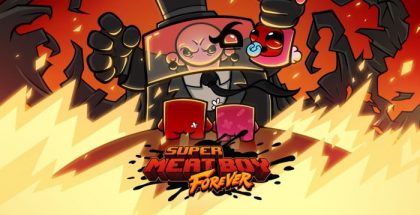 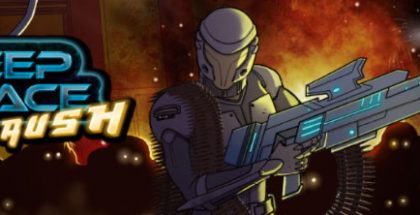