*This editorial is based off of the PC beta*
Risen 2 was a pleasant surprise. Gone are the select a class aspects, such as Mage or warrior. You are, instead, given the opportunity to spend your hard earned exp on skills to shape your character leaving many doors of possibility open to shape your pirate how you see fit. 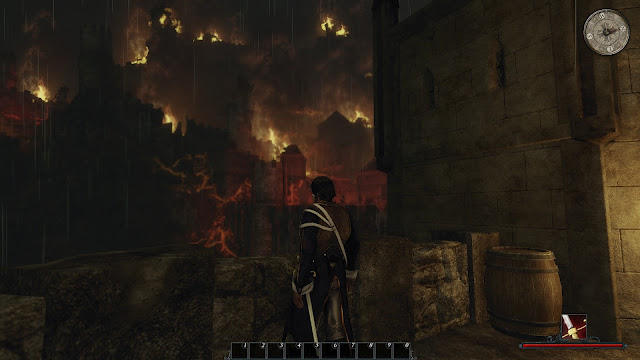 The game is gorgeous. Textures are spot on and the lush landscapes of the open world are breathtaking. So much so that my PC begged for an upgrade. The game’s main draw will be its combat. This isn’t your simple hack and slash. Human opponents will have you parrying and countering, so those who run in expecting to hack and slash will get owned very quickly. Some of the encounters can become drawn out, but as a fan of Demons Souls, I didn’t mind one bit. I can see the future battles becoming more and more satisfying with every win. Here’s a look at Combat from the beta.

The beta is enough to get a full feel of the game and I am personally looking forward to long battles that require attention rather than hammering away on buttons. The dialogue is well done and the open dialogue trees were a welcome surprise. Risen 2: Dark waters lands 5-22-12 for $59.99 and should be on everybody’s wish list.

[tab:Product Details]
Several years after the end of Risen, humanity is pushed to the brink of existence and one of the only safe havens is Caldera, a city located on the peninsula of the Lost Realm. However, even this sanctuary is threatened by the world at chaos, as monstrous sea monsters cause shipments of vital supplies to come to a grinding halt. The hero, upon discovering a rumor that the pirates of the Southern islands know of a way to banish the creatures of the deep, journeys to infiltrate their ranks and attempt to acquire this knowledge in time to save Caldera from imminent peril.

A Unique Pirate Fantasy Setting – Risen 2 features an open world complete with copious amounts of rum, firearms, dirty tricks and a brand new voodoo magic style.
One of the Most Intense, Immersive Game Worlds Ever Created – Risen 2 will fully envelop its players in its world with a full day/night cycle, dynamic weather patterns, NPCs with daily routines who react based on your behavior, and even creature AI with routine behaviors such as scavenging and sleeping that are impacted by the time of day.
Every Gameplay Decision Made Has a Consequence – Risen 2 allows players to shape their game experience and even the game world itself depending on their actions and choices. Your choices may change the character’s skill set, NPC relationships, or even potential quest lines.
A True Role-Playing-Oriented Experience – A perfect blend of classical RPG gameplay and a fresh, unique underlying game world.
Several Unique Islands – All lovingly designed by hand with no copy and paste set pieces, encourage exploration and adventure while the player hunts for secret treasures and hidden areas.
New Visual Technology – High-res texturing, gorgeous weather, water and light/shadow effects, a fully revamped character animation system and an exhaustive NPC character model design which greatly reduces the chance of “clone” NPCs.[tab:END]