As a follow up to my review on Disney Universe, the fun and addicting game I love to play with my kids, I’m here to review the Phineas and Ferb DLC. I will also be giving a couple codes for this DLC!!

The Phineas and Ferb DLC is based on Disney Channel’s Emmy Award-winning “Phineas and Ferb,” “the #1 animated TV series among tweens 9-14.” This DLC adds a new world to the game, however instead of the 3 levels per world found in the full games, this DLC only adds one level for the new world. That level, like the others, is broken down into three parts, but is still a little short in my opinion for a $4.99 add on. There are however also 5 new costumes included with this DLC, including Phineas, Ferb, Dr. Doofenshmirtz, Agent P, and Candace. You start right away with three costumes available, and have to unlock the other two by playing through the level twice, unlocking one each play-thru. 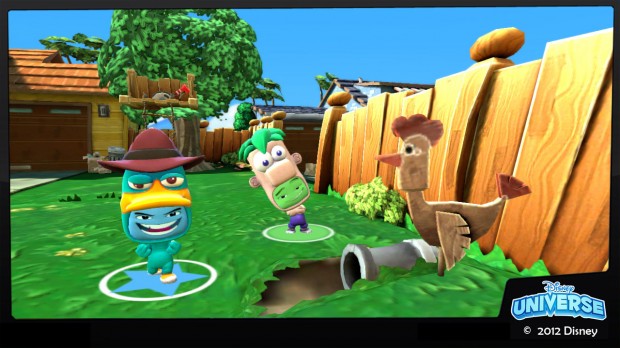 That being said, this new Phineas and Ferb level does add some neat new game play aspects. The “Chick-Inator” turns players into chickens in order to access small spaces that would otherwise be unreachable and are often hidden. There is also an “Atomic Leaf Blow-Inator”, which allows you to blow away piles of leaves to reveal collectibles. 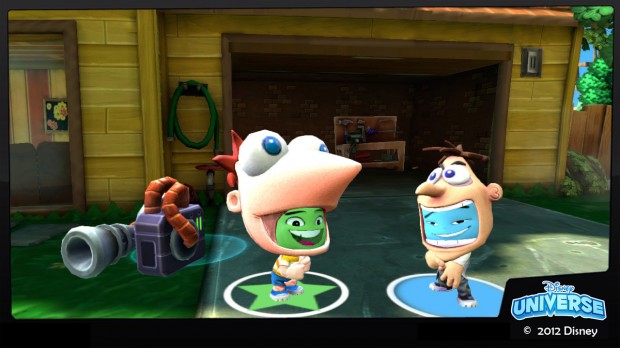 As with the other worlds in the game, there are many traps and hazards that must be avoided, and many tasks that must be completed in order to advance through the suburbs of Danville. “The level will culminate as players battle Dr. Doofenshmirtz in an epic showdown to bring down his blimp and save a trapped passenger,” rewarding you with a new costume.

Over all, I had fun playing through this new level a couple times with my kids, and although it seemed short, it did provide us a good hour or so of entertainment. I actually am looking forward to new levels that have yet to be announced!

For those of you that would like to give it a play, but have yet to buy this DLC, I have a special gift for you. Two people, to be chosen at random, will receive a free PSN code for the Phineas and Ferb, Disney Universe DLC. As this is an add-on, and a copy of Disney Universe is required to play, I am requiring all who want to enter this giveaway to give me their PSN account names so that I can ensure you have played the game. I will look for a trophy and then randomly choose two winners from those that qualify.

Thus, to enter all you need to do is comment here with you PSN name, or by sending it to me via private message here on the site and let me know you would like to enter. I will then randomly pick two winners on March 30th, 2012. Good luck!