Shienryu is a classic vertical-scrolling Arcade shootâ€™em-up that was faithfully translated to the Playstation with good flair and fun back in 1999.

Youâ€™re captain of a sleek space craft out to defend the planet against a horrific enemy. The game can be flown alone or with a friend for added power (and laughs!). Youâ€™ll face off against towering alien mechs and endure a bedlam of bullets that will test your steel.

Warashi developed the game with stunning arcade graphics and gave intricate detail, which makes this shooter a wonderful play even to this day. The amount of particles on the screen and their effects in the background as they fall to the ground is superbly displayed. The variety of power ups and weapons give the game much diversity and increase its longevity.

Shienryu one of those great shooters you go to again and again cause its so much fun to shoot the living piss out of every mech coming at you. If you donâ€™t laugh as you blast the Red Octopus boss in stage 3, then you really should have your humor bone honed. Itâ€™s a game that will surely keep your fingers tapping and your heart racing. A brilliant arcade classic.

As has been the case with other PSOne Imports, all menus and text is in Japanese… which really isn’t much of a problem with Shienryu since we can all understand that we are good, every other ship/vessel/tank is bad, we move with the D-Pad, Shoot with Circle or Square, and we can use X to unleash a powerful Smart Bomb that changes depending on the weapon you have equipped at the moment. This shooter is part of the “one hit and you’re dead” genre, so you must be extremely careful when dodging all the bullets that will be flying towards you. Not as crazy as “bullet hell” shooters, but still a humbling experience.

By now, you know the drill: Make your way to the end of the level, after shooting hundred of enemies while collecting power-ups that increase our your speed, your firepower and your Smart bombs, and hope that you can quickly understand the attack and movement pattern of the huge boss that is trying to stop you from making it to the next level. If you’re too slow, if you can’t understand the pattern and if you’re completely destroyed and run out of lives and continues, you make the most of what you’ve learned so far, and try again from the start. And this is just how I like my shooters.

To make it even easier for everyone to understand how the game works, here is the list of all the Power-ups and Weapons you will run into during your experience:

Weapon Power (red square with a P in it)
Increases your weapon power by one level. There are three levels of power for each weapon. Collecting a power increase while at maximum power will allow you to carry upgrade-levels over to your next life. Collecting one once your next ship reaches maximum power gives you 5000 points.

Ship Speed (blue square with an S in it)
Increases your shipâ€™s speed by one level. There are three levels of speed. Collecting one once your ship reaches maximum speed gives you 5000 points.

Super Power (moving, flashing square with a P in it)
Upgrades your ship to full weapon power and speed, and gives you a shield that will protect you from a single hit.

Bomb (shifts between a red B and a bomb icon)
Increases your bomb stock by one. You gain a bonus for unused bombs at the end of a level. Bomb effect changes with current weapon.

LEDs (look like little poles with a red or blue light on top)
Cashed in for bonus points at the end of the level. 1 blue LED is worth 10 red LEDs. 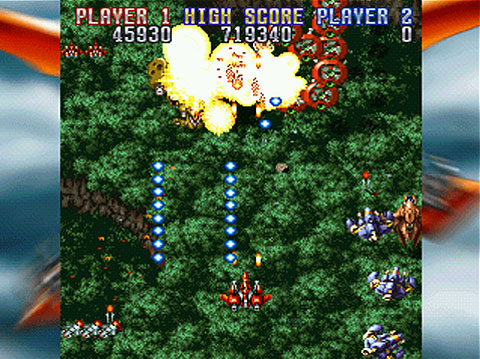 Lightning
Fires homing lightning that deals continual damage before vanishing. Amount of damage dealt and number of bolts increases with power-level. At higher levels, lightning will arc from one target to another.

Missiles
Fires missiles in a forward formation. Number of missiles fired increases with power-level. At higher levels, homing-missiles are fired out to the sides. 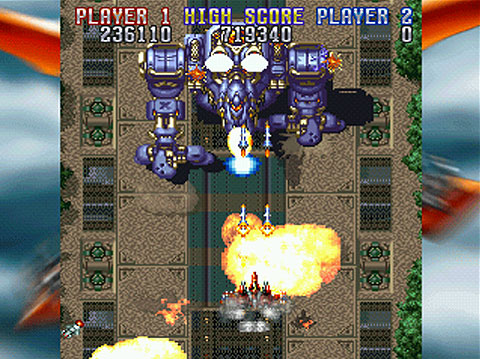 Right from the start, you can decide to play the game on normal mode (Shienryu option on main menu), on Easy mode (second option), Hard mode (third option) OR you can select the last option in the main menu to have access to the extra modes menu. What does this special menu hold? Let’s mention some of them, as to not ruin the whole surprise!

First up is Jienryu which answer the age old question: what would happen if I played a vertical shooter on something less powerful than a Dremcast VMU? And the answer is simple: You would have a lot of fun while playing a game that is even harder than the Shienryu itself. Without any powerups, a constant stream of enemies, and a huge boss at the end that can deplete your extra lives stock in 10 seconds, you will really need to focus while playing. Did I mention that after defeating the boss you start again but now all enemies shoot at you and the also move faster?

Second extra mode is Stingy Mode, in which you only have the one ship and one bomb to complete the game, you cannot continue after you’re killed, and there are no power-ups. The enemies also only give you a single point when destroyed, so good luck with reaching a high score!

Another option is playing Merciless Mode, a bullet hell version of Shienryu that puts other bullet hell games to shame. Enemies fire fast, homing bullets, they pack every single inch of the screen, and are out to get you. If you think that Hard mode was too easy, you can take this for a ride and see how good you really are. 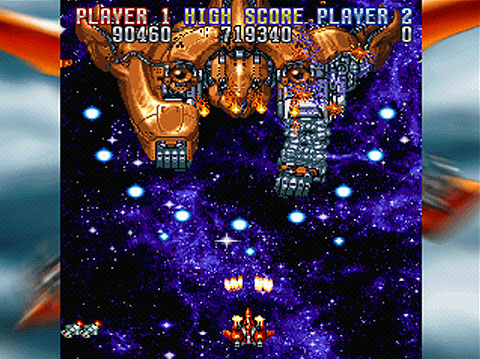 Shienryu is a great port of a Japan only arcade game that most of us had probably never heard of before. MonkeyPaw Games has made it possible for us to enjoy this game either on PS3 or PSP, and thanks to the fun gameplay, extensive levels and extra modes included in the release, I can completely recommend this to all shooter fans.

Nearly A Year After Hackers Forced PSN Offline How Have Your Online Spending Habits Changed?

Sixaxis Controller With Your Android Phone? Are You Nuts?... August 11, 2011 | Madagasca