This morning was just like every other morning. Then, it happened. No one knows where they came from, or what they are. But we all know that nothing will ever be the same. Now, your only chance for survival is to outrun the destruction of your city… with just one button.

Run for your life!

When you wake up to a robot invation, you can only do two things: run, and run faster! Canabalt hails from the year 2009 (yes, that does sound like a long time ago), and it was the start of the auto runner craze. What is an auto runner? It is a game on which your character runs automatically (get it?) without any outside input. You usually only have control over him with a single button that allows him/her to jump. Other games have added a double jump, or even another button to allow you to fire (heeeellooo One Epic Game!), but the basic concept is still there. 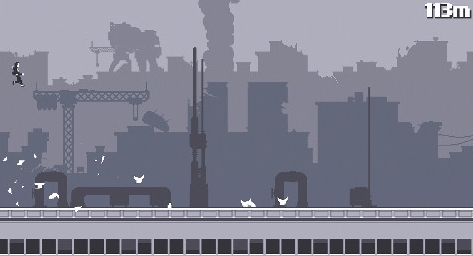 Canabalt is all about running until you die, always hoping to escape the madness that is brought by GiantKillerRobotsTm, when they decide to invade somewhere. You will need to jump from building top to building top while avoiding any obstacles that might make you sit down for a cup of coffee with the Grim Reaper. The more time that your character spends running, the faster he will continue to run. This is great when you want to outrun an off-screen menace, but it is not that great when you’re trying to make a precise jump over then void that is imminent dead. By hitting small obstacles, you can slow down a bit, but you must be careful to not slow down too much, or else you won’t be able to make the next jump. A bit of a Catch-22 since you can’t see how big the next jump is if you’re going to slow, but going too fast means you could jump OVER the whole building, falling down to the far, far away land of concrete floor.

You must also avoid “death from above” objects, that are either missiles or discarded arms from the GiantKillerRobotsTm. Hitting those will bring you to a halt, and your game will be over in a flash. Why? Because you’re crashing into a very hot piece of metal that is bigger than you, and when you combine human flesh with hot, smoldering metal…

Some buildings are just waiting for you to set foot on top of them to start crumbling down. Guess all the pigeons on the rooftop were not heavy enough to destroy the whole thing. But the pigeons sure look nice when they fly away, trying to avoid you at all cost. 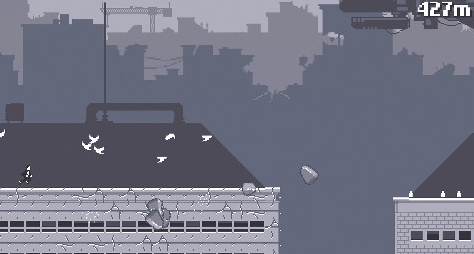 Canabalt is a small and minimalistic game that you should definitely add to your collection. The Auto runner extraordinaire is still fun after all these years, and you can now enjoy it on your PS3, your PSP or your Vita. How far can you run before you just can’t run anymore?

This review is based on a PS3/PSP copy of Canabalt obtained from Beatshapers.