In a well established, post-apocalyptic theme era, I Am Alive proudly presents itself as a psychological survival horror game, with emphasis on the psychological part. While I Am Alive’s unique concept distinguishes the game from other titles in the genre, some poor executed decisions made my walk-through a “displeasing experience”.

Set in a fictional American city called Haventon, most of the human civilization were wiped out during a catastrophic event, covering the world by clouds of toxic dust, and thus making it barely habitable. You assume the role of an unknown man in his journey to reunite with his wife and daughter.

The hazardous environment is your biggest enemy in I Am Alive. Ubisoft has also created a genuine feeling of tension in the sections you meet other survivalist, whom will either: A: request your aid, B: point a gun in your face, or C: simply attack you for the goods you are carrying. However you react to these encounters, the choices you make will affect your, and others’, survival.

The first thing you will notice when playing I Am Alive is the colors. Everything is tuned down to grey, red or black. The ruins of past civilization adds a depth of reality to the overall experience. Ubisoft managed to create a unique atmosphere in I Am Alive, but my anxiousness to explore the environment was shattered by the limited exploration the game offers. Buildings, cars, bridges … etc, are only created as parts of the environment in a sense that you can explore a little and interact with a few.

The graphics are not the prettiest I’ve seen. Given the time spent on the game, nearly 3 years since 2008 E3, makes you wonder why characters have no facial expressions, or why everything lacks polish and look somehow .. unfinished. Even the commonly polished cut-scenes are not commonly polished in I Am Alive. I should mention that Darkworks, known for games such Alone in the Dark: The New Nightmare and Cold Fear, was in charge of development from 2008-2010. Ubisoft Shanghai took on the project from 2010-2011. Personally, I loved the 2008 version the Paris based studio Darkworks had. If you are wondering, in 2011, Darkworks was placed into compulsory liquidation and was closed, but their 2008 E3 trailer will always be the “I Am Alive” version I’ve always wanted. 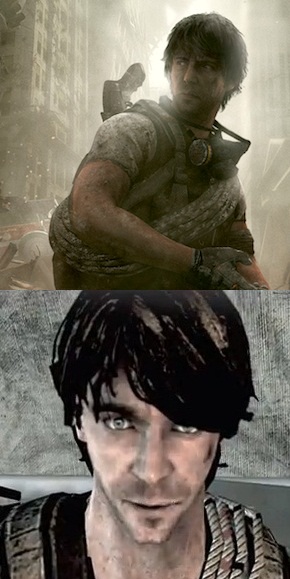 How the media portrays the protagonist VS. What your character actually looks like

My biggest upset with this game is the poor controls. They are either slow, delayed, or unresponsive. When you are climbing a 20 story building, hanging from a small pipe (come to think of it, I wonder why skyscrapers have pipes), you’d expect to have a level of control over your environment. What you get is the most frustrating climbing system I’ve ever encountered. Pulling my character up a ledge was my biggest challenge throughout the entire game.

When you run out of health or stamina, you will obviously fall to your death and restart from the last check point. In I Am Alive, you can’t save your previous progress. You can restart the last check point, but it could be somewhere far behind your current progress. There is no actual method to tell where in the timeline the saved point was. Also, you have only 3 (Rewinds) from the last checkpoint. Rewinds are actually collectible throughout the game, or acquired by doing favors for strangers. Think something like an old school platformer, 3 lives left. When you run out of rewinds, you will have to restart the game from the last saved point. That could be anywhere from 2 minutes back, or the entire time you spent climbing up a building to reach an objective. There is no actual way to tell.

In I Am Alive, you can’t jump! There is no actual button for jumping. There are certain areas you can access and others you can’t. Say if you are standing near an object you can climb, like a wall or a fence, pressing X will make your character jump and climb this object. I find it annoyingly strange that you can’t get on top of a car or climb small walls if there is no purpose of doing it. If it is not part of the story, you simply can’t do it!

The developer introduces a new concept with the Stamina meter. Everything you do will affect your stamina meter. Running, climbing, being exposed to toxic gas, getting shot at, getting stabbed, hanging from a ledge; every action you make will effect your stamina meter. In some cases, the meter will refill when you rest. In other cases, some items are required. Items you can find by exploring a little more, such as bottles of water, food cans, pain killers, soda .. etc. You can access your inventory at any given time, check out the items you have collected and select the one you think fits most for your particular situation. Your resources are very limited. 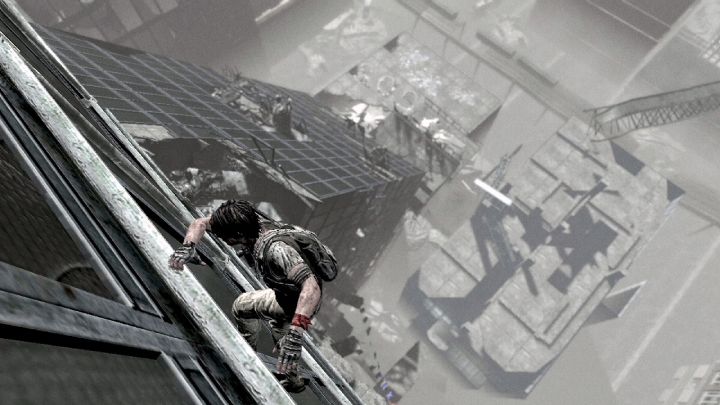 Getting to one of the objectives can be undeniably challenging

During my play-through, I had many encounters with strangers in need. Some will ask for particular items, such as fresh fruits, cigarettes, water, and pain killers. You can always come back once you acquired the needed item. Strangers will grant you rewinds and access to some goods, which proved to be useful in many cases.

The soundtrack of the game is annoying. It is not realistic, authentic or related somehow to the actual story. It is simply annoying. When you are presented with a situation where your stamina is running out, and you will encounter many of these, the game makes a noise to indicate that your stamina meter is running low. In my 20 years of playing video games, I haven’t ever turned any game volume down because I was annoyed. I am not bashing on the work of the sound artists, but man, what were you thinking?

There are a few unique concepts to explore. The psychological act of pointing a gun at someone and witness their reaction was somehow .. satisfying! You won’t find much ammo for your gun, but once you do, you will have to use them wisely. Other survivors in the game will be intimidated if you point a gun at them. Some will ask you to “take it easy .. man”, while others will challenge your morality and ability to actually fire your gun. Making your decision based on the facts you are presented with can make a big difference.

For example, I was presented with a situation when three strangers attacked my character because “I stepped into their territory”. I had only one bullet to use, so I aimed at the most intimidating character in their group, who happened to be the big guy, and fired my pistol. The remaining two characters attitude changed into fear and they decided to put their weapons down and I was able to pistol-whip them unconsciousness without them knowing that my gun was empty.

Although “I Am Alive” poses some unique ideas, the game still falls short in all other areas. Since the 2008 E3 trailer, the game had lot of potential to stand among other great titles in the genre, but came out somehow disappointing. You can clearly tell that it was rushed for release by the publisher regardless of some major improvements that could have been done to the gameplay. If you still want to experience the story and the intense atmosphere, I would suggest that you wait for a price drop.

Demon’s Souls Servers to be Shut Down Next Month