The first Grand Slam Tennis was originally planned as a PS3 release but EA faulted on its first service, and it never saw the light of day. EA are back with their second try with Grand Slam Tennis 2 which has a few things in its locker: Total Racquet control, tons of official licenses, and full Playstation Move support if youâ€™re feeling active. Now if we could have quiet please, weâ€™ll get started on this review.

Grand Slam Tennis 2 employs a control scheme called Total Racquet that allows you to move the right stick in a manner similar to that of a real racquet. Itâ€™s a method seen before in EAâ€™s NHL series to control the playersâ€™ stick, and to an extent in FIFA when executing skill moves. By pulling it back and forth and then aiming it where you want the ball to go, for example pull the stick backwards then follow through upwards for a topspin shot with the speed of movement determining the speed of shot, you can have more control over your shot. You can also slice shots by reversing this action and hitting the ball away and to play a flat shot you just push the stick forward. All of these movements are in the direction you want to play the ball so there is a lot of flexibility but I found it unreliable when it came to the crunch.

The same can’t be said for Move as well which makes serving tedious to time and still relies on buttons to play different types of shot. I was hoping I could slice shots with a cutting movement to create spin or even having to do a backhand swing to play backhand shots but you can just swing the same way each time. It makes it easy to get into but hard to execute the shot that you wish. Ultimately after trying these two control schemes I reverted back to the arcade button layout as it provides a greater sense of timing and precision. 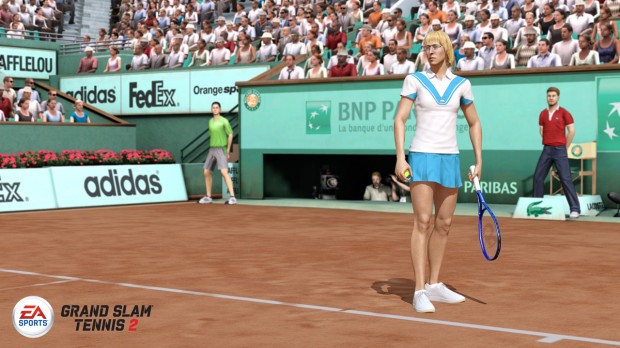 On the court, GST 2 plays a good game of tennis with fast action and tactics coming into play allowing you to cultivate your own play style whether it is power shots from the baseline or volleys at the net. Playing against different players forces you to adapt to your game resulting in you needing to change your tactics to overcome them. You can play as 23 different pros that are evenly split between current to old pros including Novak DjokoviÄ‡, Maria Sharapova and Pete Sampras. They donâ€™t just look realistic, they also benefit from some custom animations, so McEnroe does his little hop, Nadal flails his arms everywhere and Federer serves in his graceful manner, which all helps to bring out the personalities of your opponents who have their own unique play styles too.

Notable absences include Agassi, Caroline Wozniacki and Sue Barker(!), but fortunately internet whizz kids have created missing pros, which are available to download in the create a player section, making their absences bearable. Naturally, there are 738 versions of Anna Kournikova, along with Cristiano Ronaldo and Whitney Houston, which kinda brings a whole new meaning to My Love Is Your Love when used in Tennis. The multi-year spanning line-up results in a bizarre career mode where the likes of Boris Becker and Andy Roddick fight it out for the US Open title. It doesnâ€™t quite feel right considering EA have made a point of featuring all the major Grand Slams, and I fail to see what makes them more realistic than Virtua Tennis. At least that has Laura Robson even if she is rubbish. I mean only 4 current womenâ€™s tennis pros? Iâ€™m pretty sure the womenâ€™s Grand Slam tennis finals donâ€™t start at the semi-finals. There are fictional players to make up the numbers, but it still feels week compared to the thousands of licensed players in other EA Sportsâ€™ titles. 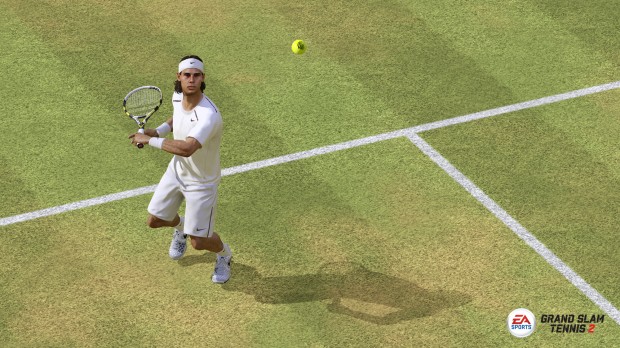 Career Mode has taken a nod from the FIFA series “Be A Pro”, allowing you to import your own face, even accessing that same photo you uploaded for FIFA 3 years ago when you had that rubbish beard that you still regret. Fortunately, you can always reupload your photo sans the it-seemed-like-a-good-idea-at-the-time facial hair and acne. Itâ€™s great to see it seamlessly integrated, as I had my pro on the court in a matter of minutes, and thereâ€™s no doubting the appeal of seeing your smug face celebrating a backhand winner against Nadal. Your aim is to climb the ranks and become the worldâ€™s number 1 by gaining XP throughout your career, and each match has specific goals to boost your score, such as 5 backhand winners or win a point after a rally of 10. Interestingly, your XP can also be lost if you fail to win a match, making every match count. The 10 year Career mode pans out as youâ€™d expect with you spending the time between Grand Slams training, taking part in minor tournaments, and buying new items from the shop like sweatbands (yay!).

Training is available between each event and aims to improve a couple of you stats categories from Power to Accuracy and Speed (these pretty much entail you hitting the ball a certain way to a particular area of the court whilst McEnroe shouts at you). Thereâ€™s little margin for error, meaning not only does it punish you by awarding no upgraded stats, but it also stops you from training again until after the next tournament. Itâ€™s a frustrating affair in that it doesnâ€™t improve you helping to work at the weaker areas of your game, and you end up just being rewarded for what youâ€™re already good at. Thereâ€™s also little doubting that the training is less fun than Virtua Tennis 4â€™s mini games. Granted, Murray may not warm up for Wimbledon by chasing chickens around a court, but then again he also doesnâ€™t play Bjorn Borg in the final…

Other than career mode, you can relive classic tennis moments with the ESPN Grand Slam Classics challenge mode, placing you in the middle of iconic matches: you either recreate history or change it. The classic players make sense in this mode, as you get instantly stuck into epic tennis matches, playing against the best players ever. Thereâ€™s some decent multiplayer too, with not only head to head matches but online tournament mode where you face other players online to win the cup. Bafflingly there is an online pass, but it is not necessary for online play, and without redeeming my code I didnâ€™t come across any content unavailable to me, so why itâ€™s present is beyond me. 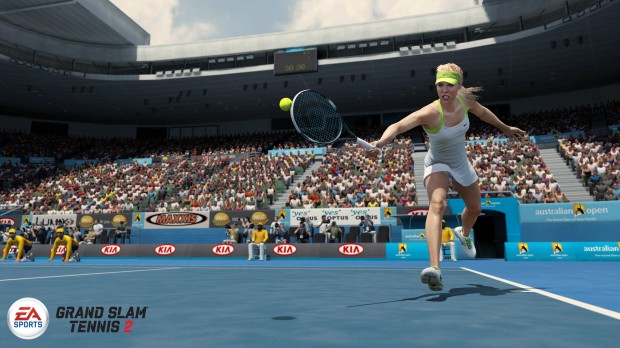 Commentary is provided by Pat Cash and John McEnroe, and is limited at best. Theyâ€™re both seemingly obsessed with shots from the back of the court whilst constantly repeating themselves. The crowd do a great job of building up atmosphere by quietening down before each service, yet still containing the odd twit who shouts if the player takes too long. They also grow more excitable as a rally progresses, and give extra applause for a well won point which is a great touch.

Grand Slam Tennis 2 does a grand job of simulating tennis with highly detailed players and stadiums, with a novel total racquet control scheme which remains simple enough to understand it in no time. It may lack the fun of Virtua Tennis 4, or the simulation depth of Top Spin, 4 but it finds a good middle ground offering up licensed tournaments and a great challenge mode. Without being too difficult for newcomers, Grand Slam Tennis 2 is a great recommendation for Tennis fans who donâ€™t like their wacky minigames, but want a tennis game that is easy to pick up and play. A game winning second service, but EA still has a little way to go to become a match winner.