Farmer Ben is angry! His ewes were finally ready for the villageâ€™s annual competition, but the Chuck brothers stole them last night to make sure he has no chance of winning. Ben is determined to get them back. He has formed a special commando to enter enemy territory and exfiltrate the kidnapped ewes. He has trained his best sheep to be simply the best:

But sheep, even if perfectly trained, will always be sheep: too stupid for words. They need someone with a brain to command them. Why not you? Idiot Squad is a puzzle game in which you head a commando of sheep. Make sure to prepare your missions well to recover the kidnapped sheep throughout 50 levels. Farmer Ben is counting on you!

All done watching the trailer with the animated intro for the game? Good, good. It does a great job at setting up the story (as little as there is), and gives us a glimpse into what to expect from the game itself.

Since Idiot Squad is a puzzle game, we are eased into the game one step at a time. We are you’re shown how everything works during several “tutorial” levels on Worlds 1 and 2, in order to understand how each sheep and each tile really works. Including the tutorial levels, there is 50 puzzles in total that you need to solve. You can only progress to the next world as long as you clear the set of 5 of your current world, but if you’re having trouble with a particular puzzle, you can select another one from the set. 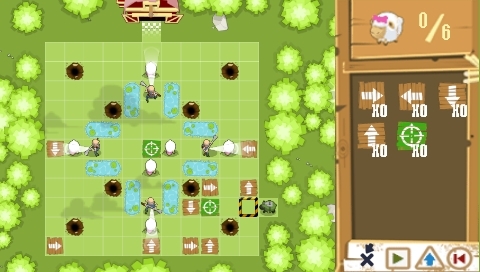 It is easy to slowly test out possible solutions to each level, since you can hit the Square button to make the sheep start their journey and, should you fail, everything will still be in place, thus allowing you to make a quick change here and there in order to succeed.

Things get a bit difficult when you are required to control more than one sheep of the same color, especially when color specific tiles are added to the mix. For example, a Green Sheep won’t care about a Red Tile, but you have to be careful about that Red Tile if you have more than one Red Sheep that must use it, since herding them towards a specific path could require you to be very creative with your tile setting.

In order for the level to be considered as complete, you HAVE to pick all Ewes before all Idiot Squad members enter the barn or you won’t be able to clear the level. This becomes particularly tricky when more obstacles and enemies (that shoot at you!) are brought into play, but it is not impossible. Also, you must know that you do not need to use all available blocks on the later levels, but that it is a must during the first 5 worlds).

There is no music in the game. Only ambient sounds play (birds chirpong, cows moowing, other farm animal sounds), which some might find is a bat thing but, for me, it is definitely a good thing since it allowed me to focus on the screen while trying to solve a puzzle, as I wasn’t distracted by any music at all. 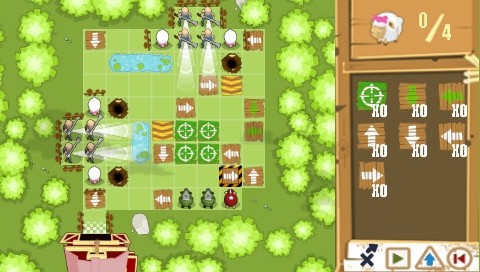 Idiot Squad is an excellent choice for all PSP/PS3/Vita owners, since it brings us an entertaining and smart game that you can enjoy at home or on the go. Sure, the story isn’t really anything to write home about but, when have we really asked about a story for our puzzle games?

This review is based on a PSP/PS3/Vita copy of Idiot Squad provided by Hydravision.