[PSN Review] House of the Dead 4

Lock and load!
Use grenades and your automatic rifle to plow through hordes of evil creatures!

Welcome to AMS headquarters, three years after the death of Caleb Goldmanâ€”the mastermind behind the creature infestations. All has been well since his death, but suddenly, an earthquake strikes and hordes of evil creatures infiltrate your home base. To make matters worse, an enemy from the past threatens massive nuclear destruction. Left with only your automatic rifles and a handful of grenades, you must escape the creatures and save the world before itâ€™s too late!

8 Gory Levels in HD: With 28 unique types of evil creatures spread across 8 graphically-enhanced levels, killing has never been more realistic and satisfying.

Co-op Play: With co-op play, you can turn story mode into a killing party for two.

House of the Dead 4 has finally made its way from the Arcade and into the Playstation Network… which was to be expected after House of the Dead 3 was made available in the service. What has been changed on this long, long journey? Not much really. The game is still fun to play, and it now has the benefit of being made available as a digital download, thus increasing the possibility that many can finally play this tight Arcade on-rails shooter. The HD treatment is not as easy to spot as with the other HD remakes/ports/collections because House of the Dead 4 was actually a great looking game, but the steady frame rate and extra shine here and there is appreciated.

Even though there is a 4 right at the end of the game’s title, this one takes place between the events from HotD II and HotD III, which means we can’t call it a prequel. What would the right term be? Some say interquel is how we should refer to this one, which sounds weird and wrong… but interquel it shall be. House of the Dead 4: The Interquel, is made of 6 chapters that take James Taylor and Kate Green straight into the apocalyptic pandemonium unleashed by the undead.

You can play wither with the Dualshock 3, with the Move, or with the Move+Gun attachment. Each one changes around things, but I would have to recommend the Move+Sharpshooter layout since it brings you into the game, and is as close to the Arcade as you’ll ever get. That is, unless you’re rich and can buy the actual Arcade itself. But you’d then be missing out on trophies with crazy requirements (Class A or S on all levels, and never die? Sure, no problem!), as well as the inclusion of House of the Dead 4 SP. What IS House of the Dead 4 SP, you ask? Well, I am glad you’re curious about it! HotD 4 SP is a very rare AND expensive Arcade edition for the game that was used as an attraction of sorts (an expensive one), in which players would sit down inside a small, dark room, and enjoy the “ride”. Huge TV screens presented the action, and a very nice surround sound system brought it all to life. Air is shot at players when they are hit (because hitting them when being hit in the game would actually be very, very rude), and some motors take care of the force-feedback required to portray a Zombie invasion. The game picks up after the end of HotD 4, and presents to us only two more chapters before it is over. Considering it is a bonus mode you unlock on the PSN edition after you complete the main game, two chapters and more trophies is always a nice extra. I can’t really go into anything else about this special mode because I would end up spoiling the story for everyone. 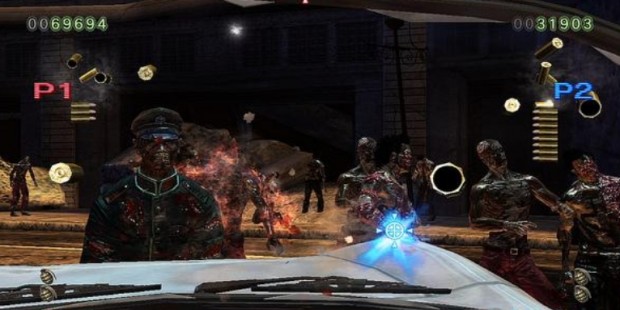 House of the Dead 4 as a digital release is a very fun on-rails shooter that gives us more of what we love: zombies. The game used an HD Widescreen display in the Arcades, and that makes it easier to jump to the PS3. The Move support make it as close as possible to the original experience, and the inclusion of HotD4 SP just makes it even better.

This review is based on a PS3 copy of The House of the Dead 4 provided by SEGA.