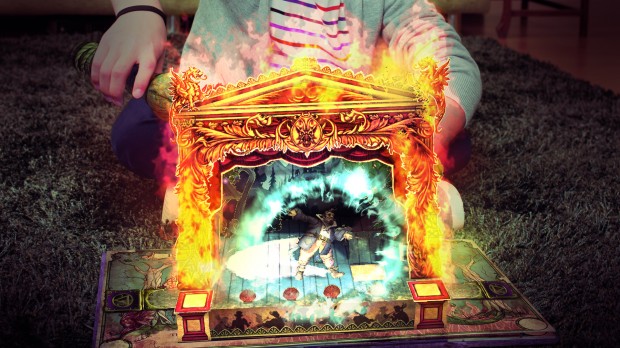 At the conference yesterday, Sony unveiled its upcoming Move/Augmented Reality game accessory called the Wonderbook, with the promise that it will bring our favorite stories to life. The first announced title to use this was also the device’s showcase software, entitled ‘Book of Spells,’ which is written by J.K. Rowling herself. Of course, to make it all come to life, the guys at London Studio (who created the EyeToy and the Eye Pet) are behind this device.

Here’s an excerpt from the Official Blog about the game itself:

From the world of Harry Potter, Book of Spells is an enchanted textbook written over 200 years ago by Miranda Goshawk. Open the book and you are immediately transported to the Hogwarts library, where your lessons will begin. Chapter by chapter, you will be able to read about and practice 20 spells, picking up valuable experiences and lessons along the way â€“ as well as house points â€“ just like a student at Hogwarts.

This could very well appease to the younger Harry Potter fans for sure, but I think they’ll get the most out of it using a big screen TV, because there are a lot of small details and the text seems relatively small for being aimed at children who might be new to the whole reading thing.

For core gamers like myself, this doesn’t seem at all like something worth purchasing, but for gaming parents who want something to entertain the kids and, potentially, encourage them to learn? This thing has potential. We just have to see if Sony can capitalize on it (maybe a publishing deal with LeapFrog, or other early learning companies, perhaps?).