Story:
Coming into this Prince of Persia game, I had only played the Prince of Persia for the PC back in the 90â€™s, so I had zero expectations regarding gameplay and story. In this iteration, the story was engrossing and compelling. I found myself wanting to play the game to see what would happen toward the end. The other key character ends up being a â€˜partnerâ€™ that is more of a â€˜helperâ€™ than anything. The humor between the two characters is witty and humorous. The voice acting was well done for the main characters; the main character’s voice is Nolan North (Nathan Drake), and he made the dialogue fun to listen to.

I believe the story mode for this Prince of Persia may be a bit more sci-fi than what some are used to, but I enjoyed it. For those collecting trophies, Iâ€™d suggest not updating the game with the latest patch, and then updating it prior to beating the game to help with some of the trophies to limit the number of times you need to playthrough the game. 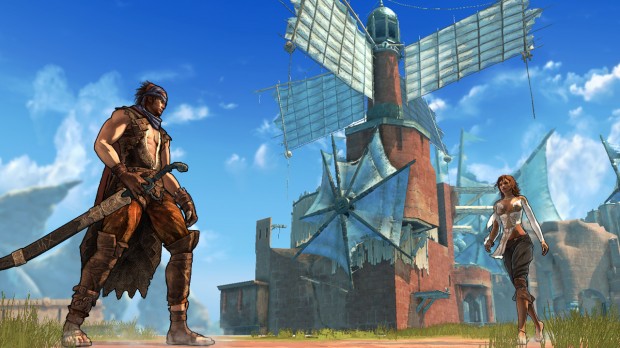 Interface:
The art style used in this game was cell shaded graphics and could be a huge turn-off for old-school PoP fans, but I thought it just worked for this games direction. The menu system was easy to navigate and there were map/portals you can teleport back and forth to. The main interface/display issue I had was with the combos being listed incorrectly. Instead of listing combos youâ€™d found or completed, it lists 90% of the combos required for a trophy in the game; not giving you a checklist for the combos was somewhat of a drawback.

You can save at any time, and have multiple saves. There are some glitchy trophies that may require certain things (combos) all being on the same save file. Advanced abilities were a fun thing to explore as well, and were easy to review out to use.

Controls:
I thought the controls were responsive, but sometimes the combat requires certain timing and pre-loading of attacks. Iâ€™d consider it more of a “Patapon” button press than hit oxxoxo as fast as you can. Jumping, and running, and running along walls and ceilings, is a complete joy. I found it easy to use the advanced abilities as well. If 3D platforming were always this fun, would there be more 3D platformers?

Level Design:
I think this is where this game shines. There was enough diversity between the levels that they really didnâ€™t get me too bored with any level/area. There are certain areas that are not reachable until youâ€™ve unlocked certain abilities, and the use of teleporting allows quick switching between areas if you need to do so. 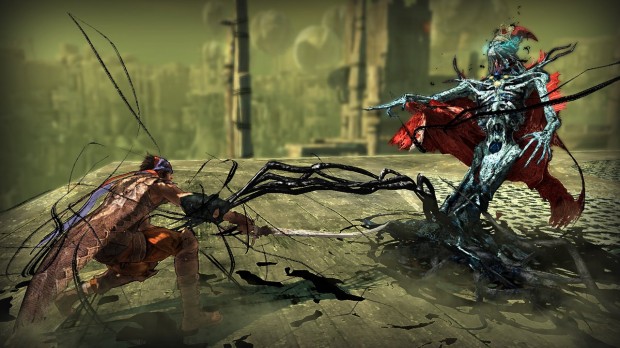 Limitations:
The lack of suspense of death. There is a trophy to limit the number of â€œfallsâ€ you have, but that is a glitchable trophy, so there wasnâ€™t much suspense to this.

DLC support:
Ubisoft added some decent DLC/extras via a DLC pack, which I havenâ€™t played, but can be played after completing the game. There is an Assassin’s Creed skin you can acquire, which is a nice touch. $9.99 for the DLC is the only thing thatâ€™s held me back. Once that hits $2.99 area, I may play this again.

EdEN’s Prince of Persia: Epilogue Mini Review:
And this is were I come in. The DLC continues the story from the main game and picks up immediately from the same frame on which the main game “ended”. I enjoyed the main game enough (even if it glitched me out of a Platinum when one Light Seed decided to be collected but NOT register on the official count), so I ended up buying the Epilogue when it was on sale at only $4.99. It will add anywhere from 2-4 hours to your time total once you’re done (if you’re a fellow trophy hunter), and it will prove to me a bit more challenging than the main game due to the crazy platforming sequences you must pull in order to find secret “Frescos” (paintings) that will count towards one of the DLC trophies. All in all, if you like the main game, then the DLC is a must… at $4.99. At a full price of $9.99, you must REALLY like the game to buy the DLC.

Conclusion:
I really enjoyed playing Prince of Persia, though some may see it as a departure from the series. I never had to worry about dying(thanks to a glitched trophy), and it was simply a joy to run around in the game. The fighting in the game doesnâ€™t force you to learn the combos, which is unfortunate, because they are quite extensive and a joy to use, but overall, Iâ€™d recommend this game to anyone looking for a 3D platformer thatâ€™s in 3rd person. I canâ€™t think of many platformers that Iâ€™d want to come back and play again, especially after I got a Platinum for, but Prince of Persia is a game I simply loved to run around in.

This review is based on a PS3 copy of Prince of Persia, purchased by the reviewer.

Tomba! will be released on PSN on June 19!