Imagine living in a world where cyborgs rule and various military groups have employed these cyborgs as their personal bodyguards. Fortunately for us, that world is contained in Platinum Games’ Metal Gear Rising. I was very skeptical at first, however, it took me less than 5 minutes to be submerged and fully embrace the world of Metal Gear Rising.

The game starts off in a courtyard where a person with a German accent is explaining the controls. Targets raise up off the ground, revealing at first, standalone silhouettes. The second batch of targets are a little more challenging, as they appear to be holding hostages. This is where the fun begins. You hold down the L1 button and the game goes into a slow motion, Max Payne bullet time-style mode. With the right analog stick, you guide the “cut line” (indicated by a orange glow) where to cut, then you simply flick the right analog to that direction, and there you have it!

As the demo progresses, you work your way up the chain, so to speak, by fighting cyborg soldiers one at a time, and sometimes even two at a time. Later on, a Gekko shows up meaning to ruin your day, but you make short work of it by grabbing its tentacle and spinning it around like a stringed Yo-Yo. That’s the way I disposed of it, however there are hundreds of other ways. “Ninja Run” was demonstrated, where you simply hold down a button and you can dash on and around cars, over walls, evade attacks, and “rocket jump”. 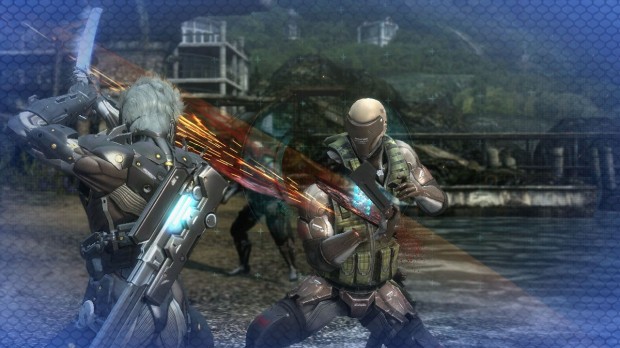 There is a certain “addiction” to the act of cutting and slicing things up. This game enhances that addiction to its maximum. I wanted to stay in the Konami booth for as long as I could, but unfortunately, the station I was playing in froze as I was about to rocket jump and cut up the helicopter. The guys inside the Konami booth looked so nervous and apologized to me more times than a waiter at Denny’s for bringing me diet Coke instead of regular Coke. I told them I understand, it’s only a demo. During my play through, there was a point where I had 3 bad guys gathered up in a corner. I proceeded to the cut them up and the FPS started to slow down so bad that one of the Konami guys had to tap me on my shoulder and stop me. I sure hope that will be fixed when the final product is out.

Overall, I was overly impressed. The learning curve was easy, the graphics and animation delivered what the title has been teasing us with in the past, with excellent satisfaction. At first, I thought this was going to be like a time constrained, bullet time-style slasher when you activate your blade… WRONG! You can cut stuff up as long as you want, however you want, until there’s nothing left to cut. During the event, you’re even rewarded with combo points for how many pieces you can cut your opponent into.

Metal Gear Rising: Revengeance is being developed by Platinum Games and Kojima Productions. Slated for an early 2013 release.

Sumioni: Demons Arts getting a Patch