Games based off of other media and entertainment licenses are usually less hit and more miss. The biggest culprits are usually those games based off of movies. Contrary to the name of this game, however, the storyline here takes place in between the first and second movies, but it is still based off of a licensed franchise. The question is, though, does it break the mold or is it something to overlook?

When I saw the first trailer, it actually gave me high hopes that it would be a fun little downloadable game. When offered to review it, I kind of jumped at the chance. The game is a 4 player drop in/drop out co-op game with a number of missions spanning over 4 chapters. If you’re used to 3/4 overhead shoot-em-ups, you will have a basic idea of how gameplay control works (right stick to aim, left to walk). There is one mission in every chapter that takes place on Barney Ross’ plane, where it’s basically an on-rails shooting gallery to kind of mix things up, but these missions are very short.

You can select up to four characters from the movies, and their likenesses, to control, including Barney Ross (Sylvester Stallone), Hale Caesar (Terry Crews), Yin Yang (Jet Li) and Gunnar Jensen (Dolph Lundgren). Each has a different loadout of weapons and different specialties. Caesar, for instance, has an explosive specialty and is good in mid to long range while Yang can more easily penetrate defenses and is more effective in close quarters situations. There are also powerup moves, which you can perform once you filled up your combo meter (and you can join in on another’s if another player activates his, but I haven’t successfully been able to do this).

Health, weapons, and abilities can also be upgraded, but it does take a lot of work to build up enough XP to upgrade various attributes for what is otherwise a bare bones, overly simple upgrade system. I would suggest not upgrading anyone until you find the character that best suits your playing style. For me, it was Gunnar’s long range specialty with the sniper rifle (Barney is also a good all-rounder). 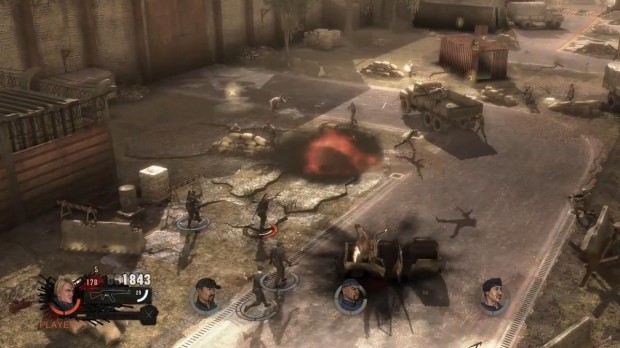 The concept for the game was actually a decent idea, but things got ugly pretty quick. First of all, the voicework was sub-par. During some missions and firefights, the commentary between Gunnar (actually voiced by Lundgren himself) and Ross was atrocious. It sounded like a bunch of garbling. I could be really offensive about how that sounded. Crews’ voicework was a little better, but you can tell that physical actors seem to almost always have a hard time with voicework.

There are also a few technical problems. I’ve noticed some clipping, which isn’t too big a deal. I do think, however, that Gunnar’s rifle being capable of penetrating pretty much any barrier from any distance a little ridiculous. Honestly, I often stood in the back of the screen, away from the action, and still finished the level with more kills than anyone else, which was often from 150 to 200 or more. At least he sucks at melee attacks, which are really slow compared to the others. I think the biggest issue we had was when another player got stuck on a level somewhere where he wasn’t supposed to be, and it prevented us from moving forward. Eventually, said player left and the AI took over and somehow got out of it.

Speaking of AI, what a joke. I can understand shooting at your players, but the enemies that charge after the players, using blades, often have a one-track mind and will run past everyone else to get to a specific player. I’ve also seen a few enemies just stand in place. At least your team’s AI is able to figure out that they need to take cover when you do, but if you’re brazen enough to not use it, they would be, too, and wind up getting themselves injured, causing you to have to rescue their asses. That’s another thing to laugh at, too, as your enemies will ignore firing on you while you’re healing a team mate. They’ll just gather around you until you’re finished.

I wouldn’t say this is the worst game. It can still be fun at times, but there are a lot of annoyances that hinder what could have been a cheap, fun game for people to pick up and play. Technical difficulties and AI aside, the story was cheesy and had no substance and the game does get repetitive. Regardless, just sometimes hopping on, starting a public game on a random mission and just firing a few rounds at waves of bad guys could be fun I suppose.