In a world inhabited by mythical beings, where colossal labyrinths called Titans tower over the land, there’s a legend that any being who can approach the Goddess Clunea high in the sky shall have a single wish granted. A powerful and self-absorbed dragon named Fang aims for those heights to meet with the Goddess and learn the name of the strongest monster in the world. His drive to find and kill this ultimate opponent and firmly establish himself as the dominant monster of the land is mighty enough to entreat the gods, but his boldness is also his undoing. Disdainful and disrespectful to the Goddess, she strips him of his dragon form and banishes him to the surface. Bereft of the power he once wielded as the Dragon Emperor, Fang must now adjust to surviving in a far weaker body as he navigates the dangerous mazes of halls in his quest for revenge upon the creator herself.

Unchained Blades is a dungeon crawler with turn base combat that can stand with the best examples in the genre (such as Wizardry, which I reviewed here) thanks to the great art, the turn based battles, and the crafting system that will keep you coming back for more. Fourteen different artists took to working on the character designs, and they include Pako (Shining series), Toshiyuki Kubooka (Lunar series), Kumichi Yoshizuki (Someday’s Dreamers), Shinichiro Otsuka (Summon Night), Sunaho Tobe (Hexyz Force) and Kazushi Hagiwara (Bastard!!), to name a few, which is why the game universe is so rich, colorful and unique. 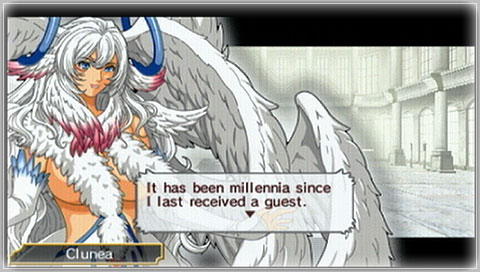 As you’ve read from the intro, Fang is out on a path of revenge against the Goddess Clunea after she stripped him of all his mighty dragon strength (after he was being to cocky and disrespectful to the Goddess), and he must now start the trials that will take him in front of her so he can get back to normal. He will not be alone in this quest, as there are others who want to have their wishes granted by Clunea as well. You’ll run into a golem, a medusa, and even a member of the medusa clan, to name a few, and it will be thanks to their strengths (and by overcoming their weaknesses) that you will prevail.

Fang and all the other characters are skilled in one or another area (fang has high attack, the golem has high defense, the member of the medusa clan is a natural healer and great at magic attacks), but you can also mix and match their attributes and parameters thanks to their individual Skill Maps. How do they work? After you level up, you’re given two skill points, and you can use one to unlock a permanent boost to your attributes (increase in MP, HP, strength, speed or intelligence), or to get new active or passive skills. For example, the member of the medusa clan starts out with a rod that boosts her magic attack, but that is a very bad option for physically attacking enemies. You’re faced with a choice: you can make her attacks with the rods be stronger by increasing her Rod skill, OR you can unlock the possibility to use daggers by making your way towards the right skill, but doing so will lower her magic power since daggers are not very magical. 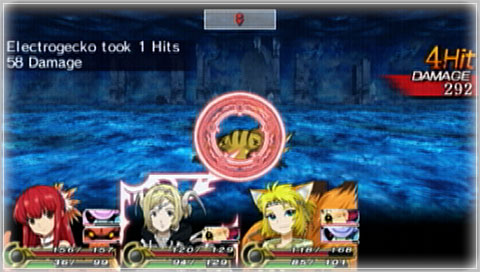 The “extra” that Unchained Blades brings to the table is included in the game’s name: Unchain! Each of your character’s has a Charisma meter that goes up depending on how fast you are at ending a fight, as well as for other parameters (such as not taking any damage), and you’re given Charisma experience as a reward. Having a high charisma rating means that some of the monsters can be drawn towards you, and a colorful circle will mark them as targets for Unchain. Basically, what this does is allow you to bring your enemies into the party as followers for each of the main characters (called Masters). You can see this in the trailer above, and the more Charisma you have, the more followers you can have with you (up to four at a time), as well as the better they can be. For example, early followers cost one point, but eventually you can find ones that cost 2 or 3 points! Followers might jump to deflect or absorb an attack directed at their master, or they might sync up and attack right after a successful hit has been delivered by the might of he/she/it whom they follow.

Another important element of Unchained Blades is crafting. Defeated enemies will provide you with rare materials that you can either sell for a nice chunk of change, or store for crafting. Mix these with other common, uncommon or rare materials you can find in each dungeon floor, and you will be rewarded with extremely helpful equipment and items. But, for this task you will need to purchase or find special items. A pickaxe, a saw and a trowel are used to obtain materials from special spots you’ll find in the map and, after several uses, all of them will eventually break, and you’ll need to get more to carry on. You’ll know when you’re near a special spot because the circle that represents your party in the dungeon map will start to emit a circular glow. White means you’re near, yellow means you’re close, red means your really close and moving one step will allow you to examine the spot upon which you stand, hoping to find exotic, expensive and rare materials. I was able to make an extremely powerful sword for Fang thanks to said materials, and it made me realize that crafting works and is worth your time.

You’re taught right from the start about a different kind battle that is definitely quirky but still a lot of fun. At some points during the game, all of your followers must directly fight against a big group of enemies. Each side has a life bar, and you must help your followers come out on top. You do this by doing a mild “DDR”, pressing a direction on the D-pad as soon as the prompt enters a small square in the center. You can also use a special gem to boost the attack and speed of your followers, but that’s about it. The rest is up to them, and the number of followers you have, as well as their current level, plays a big part in the outcome for these battles! 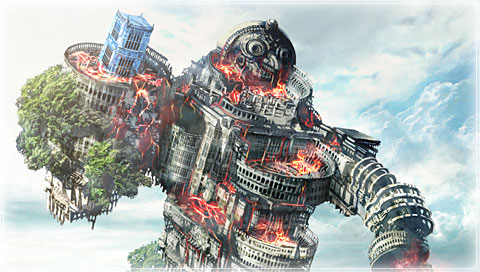 Unchained Blades is a dungeon crawler that provides you with all the nostalgia you need, but has the improvements you would expect from a game released in the 21st-century All the items, enemies, customization and strategy provided by this game will give RPG fans everything they need in order to spend over 50+ hours in this universe.

This review is based on a PSP copy of Unchained Blades provided by XSeed Games.

The Last of Us Campaign Co-Op Nonexistent