Wizorb is a unique combination of classic block-breaking action and light RPG elements. The once peaceful Kingdom of Gorudo is threatened by an evil presence. The only hope for salvation is Cyrus, a wizard versed in a secret magic art called Wizorb! Explore many strange places from the derelict monster infested town of Clover to Gorudo Castle atop Cauldron Peak. Danger lurks around every corner so youâ€™ll need to keep your wits about you and have quick reflexes in order to survive.

Do you remember games like Arkanoid or Breakout, were you controlled a paddle that was used to hit a ball so it could bounce all over the screen, hoping to destroy all bricks? Ah, yes. Those were the days. Know what would make those games even better? Pixel-awesome graphics and finely-curated chiptune music. Mmm, but it is not quite ready yet. How about we add an almost fully bald Wizard that turns into said paddle? Yeah, we’re definitely getting somewhere. But, if we have a Wizard, then we must now add magic to the mix. How about a fire spell? Or maybe one that turns the ball into a fairy we can control and move around the screen for a brief period of time? Ok, still with me? How about we now add items, power-ups, and gold coins you can use to buy said items and power ups at special stores you must unlock with keys? And it would be even better if the keys were inside treasure chests, or if we could obtain them by spending our hard earned coins to help rebuild a town that was devastated by the forces of darkness. Damn, that sounds like an awesome game. What? There already exist a game like that, and you can play it on PS3 or PSP? Well, that is just great! 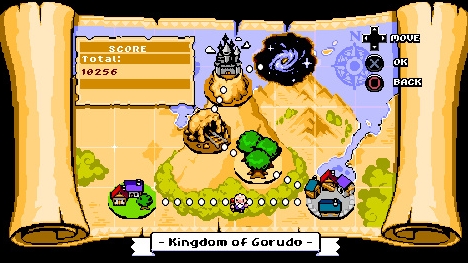 Wizorb is all of that and then some. You’re out on a quest to bring peace to the Kingdom, before it is too late, and you must do so by destroying all minions and their masters, one “world” at a time. Each world presents a different enemy type, with a distinct AI pattern you must analyze in order to succeed. For example, small blobs? Easy to hit and easy to decipher. Skeleton knights? A bit more erratic with their patters AND they must be hit from the back or else they’ll block and send the ball bouncing back. 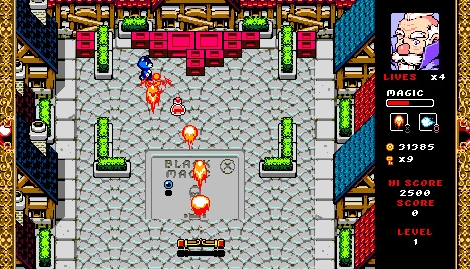 The above fireball barrage will give you an idea of how powerful your magic can be, but this image can also help to explain other elements. You’ve got a “lives” counter below the picture of the wizard, and you are deducted one for every time the ball exits the play area. Below that, we have the magic bar. Every time you use one of your spells, this bar goes down, and when you run out you must either grab one of the magic potions that sometimes appear after opening a chest or destroying a block, or buy one at a store. There are 5 magic spells available in total, but the screen only shows two. X allows you to shoot a fireball, and Circle calls forth the power of wind to change the direction of your ball. Two of the other 3 spells can be triggered at the exact time when the ball hits the paddle: X makes your ball red so it can easily destroy the bricks it comes into contact with, but only for a few seconds, and Circle transforms the ball into a farie you can move around with the D-Pad or the Analog stick, in order to get to hard to enter spaces, before it transforms back into a regular ball. The last spell is only available when you have lost a life, and it allows you to teleport the ball to any spot in the screen, as long as you don’t try and leave it on top of a block or any solid structures. 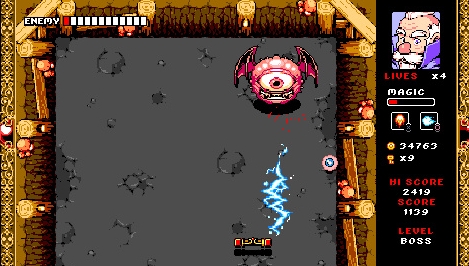 See that big bad boss? It would be easier to defeat it if you had, say, something extra on your side, right? Well, you can make good use of the keys you find to unlock doors to either shops or secret stashes full of magic potions, coins, precious gems and even an extra life. In the stores, you can purchase magic potions, extra lives, an extra long paddle, a paddle that allows the ball to stick to its surface so you can easily decide were to shoot it next, a stronger ball that can destroy thick bricks in less hits, and other items and power-ups.

Wizorb is a fast paced and fun game that will provide you with hours of nostalgia fun either at home or on the go. The easy to understand mechanics, the magic spells and power-ups, and the music and art style will win you over in no time.

This review is based on a PSP/PS3 copy of Wizorb provided by Beatshapers.

Playstation Plus Subscribers – The Rest Of Your August Content Is Almost Here!