In Darksiders II, you play as the horseman Death, in a story that runs parallel to War’s events in the original Darksiders game. As seen in Darksiders, War has been falsely accused of triggering the Apocalypse, and in Darksiders 2, Death defies orders and sets out on a personal mission to prove his brotherâ€™s innocence.

Darksiders 2 promised to feature a dramatically larger world, full weapon and armor upgrade systems, as well as bigger and more challenging dungeons and vast array of new enemies and bosses, basically improving on every aspect of the original game. The question is does it?

“Like War and the other Horsemen, Death is of a race known as the Nephilim. Though Death is Nephilim, just as War, the two are very different both in personality and gameplay. Where War values his honor above all and would never break his word, Death is more than willing to use guile and bend the rules to suit his needs. War reacted to those around him, while Death forces others to react by his cunning and persistence. Death is also far more agile and stylish than his brother. In traversing the environment, he moves quickly and naturally” 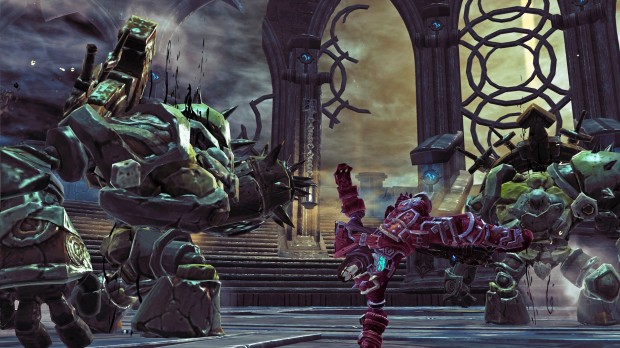 Right from the start, you can tell that Death is far more agile than War was in Darksiders. He’s traverses the environment much quicker, by running along and up walls, leaping across beams, rebounding between walls to ascend, etc. Another difference in moving quickly, is that Death has his horse Despair in the gameâ€™s beginning. This allows traveling faster between points in the massive overworld areas as well as the use of Despairâ€™s combat abilities in open spaces. 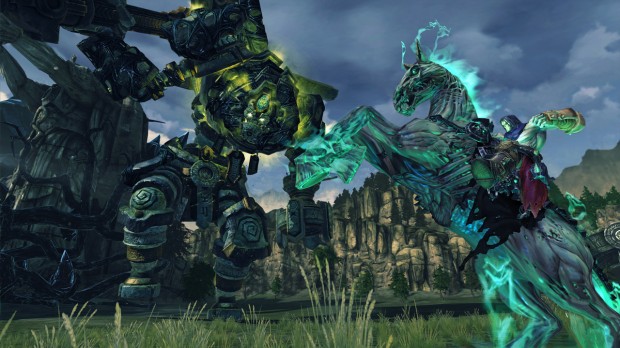 Death is also different from War in combat. Death doesn’t block like War did, but instead dodges between enemies, delivering quick strikes. The game is still a “button masher” like the first, with different combos performed depending on button combos used. Combos are also learned/bought as in the first game, but there are also many differences.

The main difference from Darksiders is the RPG like aspects of the game. New for Darksiders 2, is that Death earns experience points, and he advances in level when enough experience is earned. Each level increase boosts Deathâ€™s basic stats, and also give you a skill point to spend in one of two skill trees, the Harbinger Tree (warrior track) and the Necromancer Tree (spellcaster track). Each skill tree branches, and each skill can also be upgraded three times with skill points. You can focus on one track or mix and match between the two like I did. 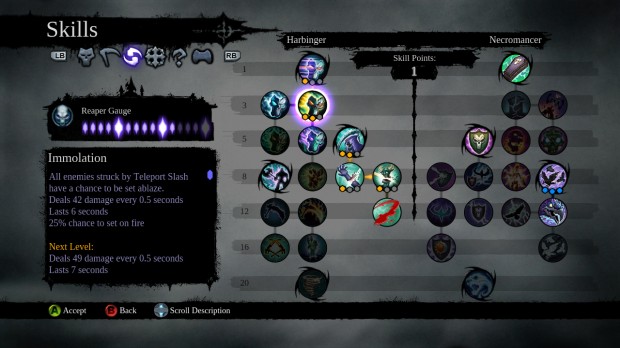 Deathâ€™s Main weapons throughout the game are his dual scythes. The weapons are fast and effective against most enemy types, and change shape in combat to a long Polearm weapon as well as a throwing weapon. Another RPG aspect is that as Death journeys through the world he will find different scythes of varying power level and ability. He will also find a number of varying secondary weapons which are found in two basic categories, light and heavy. 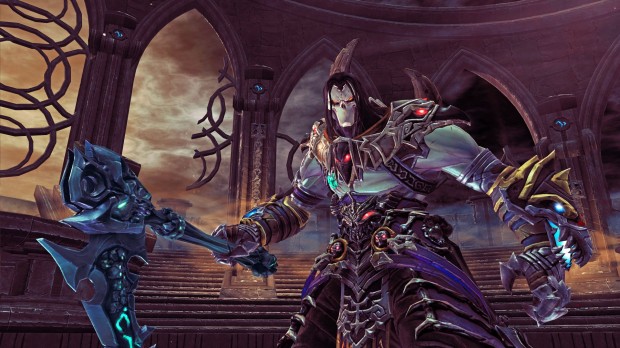 Light weapons, including gauntlets, claws, tonfas and bucklers, are all low damage, yet very fast. On the other hand, heavy weapons including hammers, maces, axes and polearms and are much slower yet do a huge amount of damage. Each secondary weapon also attacks differently, greatly varying the types of attacks. These weapons range from common to legendary, or possessed, and can be leveled up.

For a better understanding, and more on weapons and skills check out this great video from my friends at Prima Games.

Weapons aren’t the only items found in Darksiders 2. Weapons, as well as armor, amulets and consumables, (health potions, etc.) are all randomly generated, and dropped by killed enemies, found within chests, given as rewards for completing quests, or traded with NPCs. The stats of most items are also randomly generated, and thus you will never know what you will find. If you find a great item, you will probably want to save the game right away, as I lost some good items a couple times, dying then returning to the same chest to find a not so great item.

Here’s another video from Prima Games better explaining the Loot and Gear.

Darksiders 2 features a much bigger world to explore than the first game did, as well as many more enemies, bigger dungeons, and better puzzles. Gone is the necessity to find Vulgrim in order to quick travel. You can now use the much better map system to insta-travel to certain places and then, if you choose, return to where you left off in the dungeon. This makes it much easier to acquire goods and upgrades. If you happen to lose your way, as I did very frustratingly in the first game, you need only hold L3 and your trusty sidekick Dust, “a bird of unknown origins that is neither living nor dead”, will help you find your way.

The sounds, sound track, and voice acting are all done very well. The graphics are improved yet similar to the first, which I really liked. The art style is strongly based on designs by one of my favorite artists, and Darksiders I and II Creative Director Joe â€œMadâ€ Madureira. His style is definitely seen throughout the great array of creatures and structures as well. 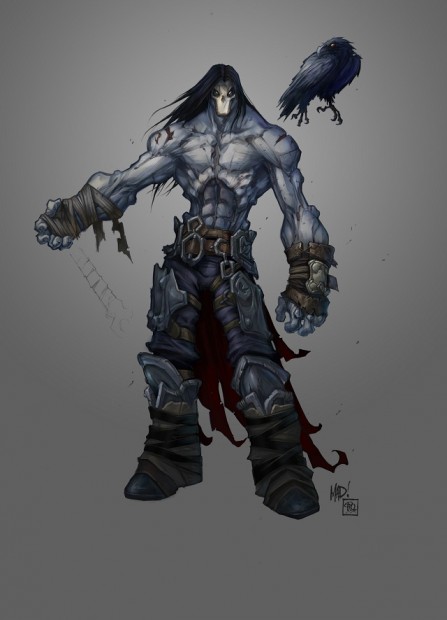 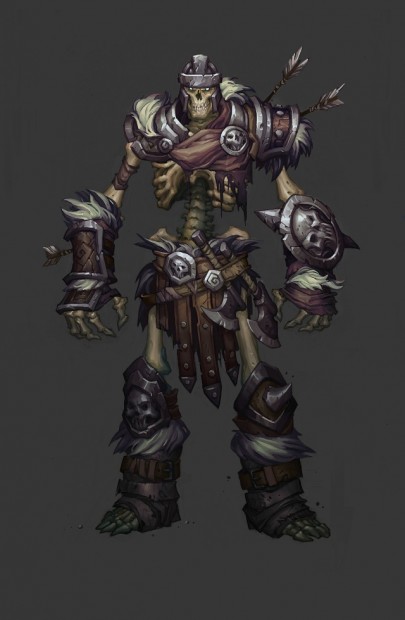 Darksiders II is huge. The main story line takes about 25 hours, and there are many side quests that can add hours to the game. There is also a “Crucible Mode” that tests players’ combat skills by sending wave after wave of baddies after you. The Crucible has 100 levels with each more challenging than the last. After every five levels, you’ll be offered a choice: take a reward and quit, or risk your reward and continue to try for better and better loot. Completing all 100 levels will also unlock a Death’s Mask Avatar for the PSN.

The game was so big I even took a look at the 339 page Darksiders II Prima Official Game Guide quite a few times.
The guide includes:

â€¢ Launch Exclusive Weapon – Bludgeon your foes with the Fletcher’s Crow Hammer, available only via the guide
â€¢ Explore everything â€“ detailed walkthrough covering Deathâ€™s journey through every dungeon and sidequest
â€¢ Combat details â€“ all of Death’s moves, weapons and abilities covered in full detail
â€¢ Solutions – solve even the most difficult of puzzles
â€¢ Find your way â€“ labeled maps show the location for every hidden item and objective

Over all the game was a lot of fun. My only real issues included some stalls in the action during loading, and a few camera angle problems. If you liked Darksiders, you’re going to love Darksiders II. If you haven’t played Darksiders, story-wise it doesn’t matter, because as mentioned, the story is parallel to the first. You will however not enjoy the first as much after playing II, because Darksiders II is a great improvement on what was an already fun game.

This review is based on a PS3 copy of Darksiders II provided by THQ.