[PS3 Review] Duels of the Planeswalkers 2013

Magic the Gathering: Duels of the Planeswalkers 2013 (released to PSN on June 19, 2012) is Wizards of the Coastâ€™s latest entry in what is apparently becoming a franchise with yearly sequels. As with Duels 2012, the gameâ€™s release teases the release of the latest Core Set of cards in the world of paper Magic. Duels is ultimately a casual introduction to Magic that is designed to increase the audience for the Magic universe at large. Full disclosure: Duels 2012 performed precisely that role for me. I am now an avid player of paper Magic with a large library of physical cards and a few tournaments under my belt.

So how does Duels 2013 stack up to its predecessors, Duels 2012 and Duels 2009? (Click for our reviews of both of the aforementioned games, as well as for the major D12 expansion and deck packs.) In a word, D13 continues Wizardâ€™s tradition of improving on these casual video games, making D13 a great purchase. Those who are curious about the world of collectible card games should absolutely check out the game, and even long-time aficionados of Magic should have fun with it (though they might experience some frustration as well). Are you new to Magic? D13 might just be your “gateway drug” to a new addiction, just as D12 was a year or so ago for me!

Duels 2013 offers ten decks, which showcase a number of different ways of playing Magic. The game does a good job of highlighting the major strengths of the five colors of Magic; thereâ€™s a green deck that goes in for big creature aggro, a red deck that boasts a suite of direct damage spells, a blue deck that focuses on tempo control and countermagic (permission), etc. D13 also advertises some of the new creatures and mechanics in paper Magicâ€™s Core Set 2013 with. For instance, a black and white deck that focuses on the Exalted mechanic, a green combo deck (which is something of a revelation, as combo decks are usually more at home in blue and red), and a blue deck that goes all-in on the mill strategy. (In Magic, there are a couple ways of winning. The most typical is to reduce your opponentâ€™s life total to zero. A more esoteric way of winning is to reduce your opponentâ€™s cards to zero; this is called â€œmillingâ€ your opponent.) 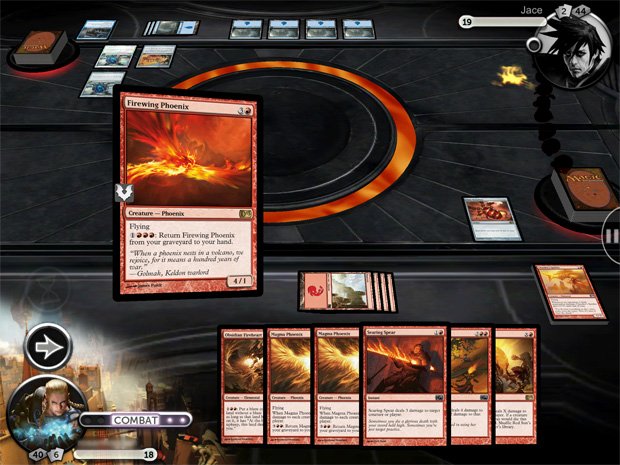 The D13 decks are generally quite well-balanced. Of course, some decks are stronger than others, but Wizards has really done a great job of working out balance issues over the course of these Duels games. Each deck is perfectly playable, and the range of strategies that the decks present provides a great opportunity for the Magic neophyte to begin to learn what colors and strategies he or she prefers.

D13 still doesnâ€™t let us build decks from scratch, which is disappointing, but also understandable to a certain degree, as that would disturb Wizardâ€™s careful balancing of the decks against each other. None of these decks would be tournament-worthy in the world of paper Magic, since theyâ€™re simply too slow, but they make perfect sense in their own hermetically-sealed environment. The games should play out more slowly here, so those new to Magic donâ€™t feel as if theyâ€™ve been defeated before they even knew what was going on. 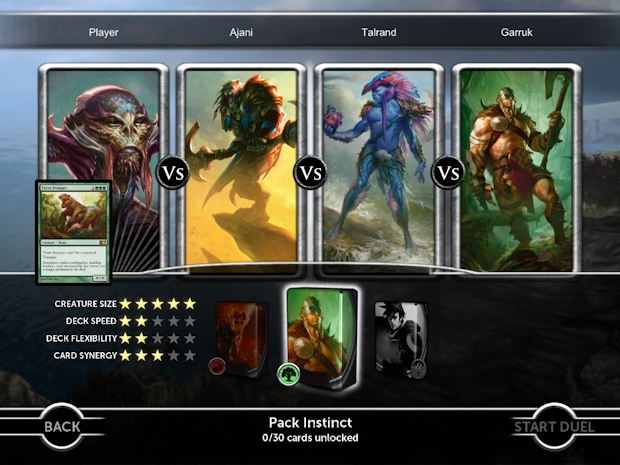 Nevertheless, deck craft has been improved since D12. Each deck has a core set of sixty cards, of which twenty-four are typically lands (cards that provide the resources needed to put into play creatures and spells), so thirty-six cards are creatures and spells. The point is that while the core game of D12 provided sixteen unlockable cards for each deck, D13 provides an astonishing thirty unlockable cards. You could eventually swap out almost your entire deck with unlockable cards! This means that you can tailor each deck to your own playing style and experiment with very different strategies for each deck. The D13 decks feel much more customizable than those of either of the previous Duels titles. 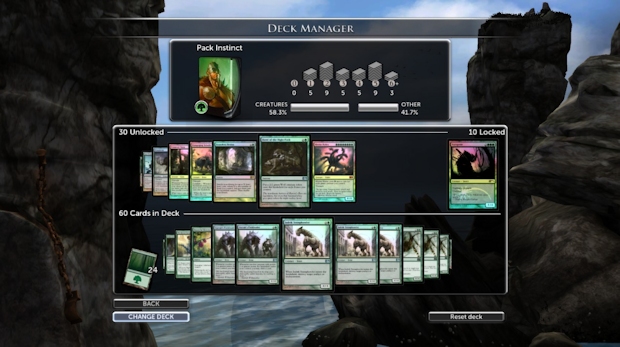 Duels 13 offers a single-player campaign, a set of â€œchallengesâ€ (fun puzzles that provide a fixed board state that require you to win in one turn â€“ these are surprisingly fun, and they teach â€œnon-linearâ€ thinking in the game), multi-player against one to three opponents, Two-Headed Giant (four player, 2 vs. 2 co-op), and the Planechase game mode. Planechase is a recently-resurrected way of playing Magic, which I abhor. It adds a great deal of variance to the game though die rolls every turn and randomly revealed cards that have weird global, game play-altering effects. Classic multiplayer is great, though. Itâ€™s fun to go head-to-head with real opponents and see how others have built their decks. Is your build optimal? How can you tweak your decks to account for the strategies of others? 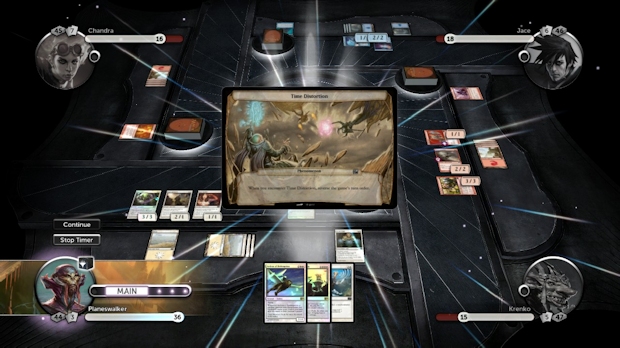 Since Duels 2012, Wizards has also made some mechanical improvements to the game. (Feel free to skip this paragraph if you are new to Magic or donâ€™t care about some of the finer and less visible details that nevertheless vastly ameliorate the experience.) Still with me? Ok, here it goes: In multi-color decks, you can manually tap lands for mana, which helps to avoid awkward situations in which the AI tapping prevents you from casting another spell. Wizards has (finally!) introduced an end step on each turn, so you can pause on the opponentâ€™s end step and do something (before triggers resolve that care about an end step, for instance). Cards that say â€œmayâ€ now actually act as a â€œmayâ€ instead of a â€œmustâ€ (as in D12) â€“ if you â€œmayâ€ draw an extra card, you donâ€™t necessarily want to be forced to do that if youâ€™re facing a mill strategy, for example. And finally, it is now much easier to pick cards as you can zoom in on a stack of cards (like a creature that has an equipment and an aura attached), so itâ€™s easier to choose whether you want to activate a creature ability or equipment ability.

In short, Duels 13 improves on its predecessors in profound ways. Magic veterans will still be annoyed by the limited deck building, but they may still find the game to be an enjoyable pastime, especially when they donâ€™t have friends to play with in real life. And Magic neophytes may well find a reason to fall in love with the game. Duels is a lot of fun, and it suggests the possibilities that the â€œrealâ€ game of Magic affords. If youâ€™ve any interest in collectible card games, or if youâ€™re the sort of person who tends more toward Tarot and Bridge than Poker, then this might well be the game for you. 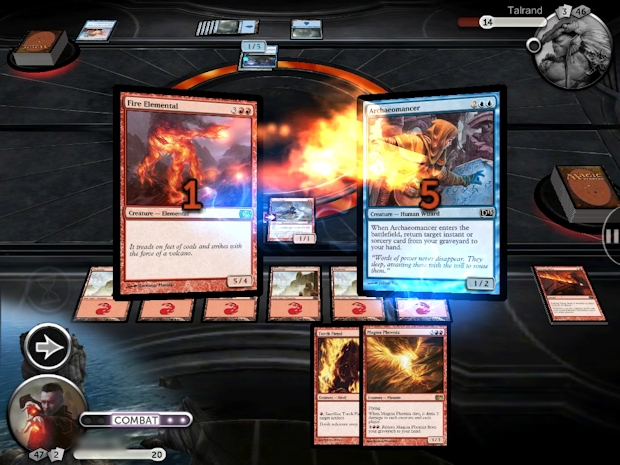 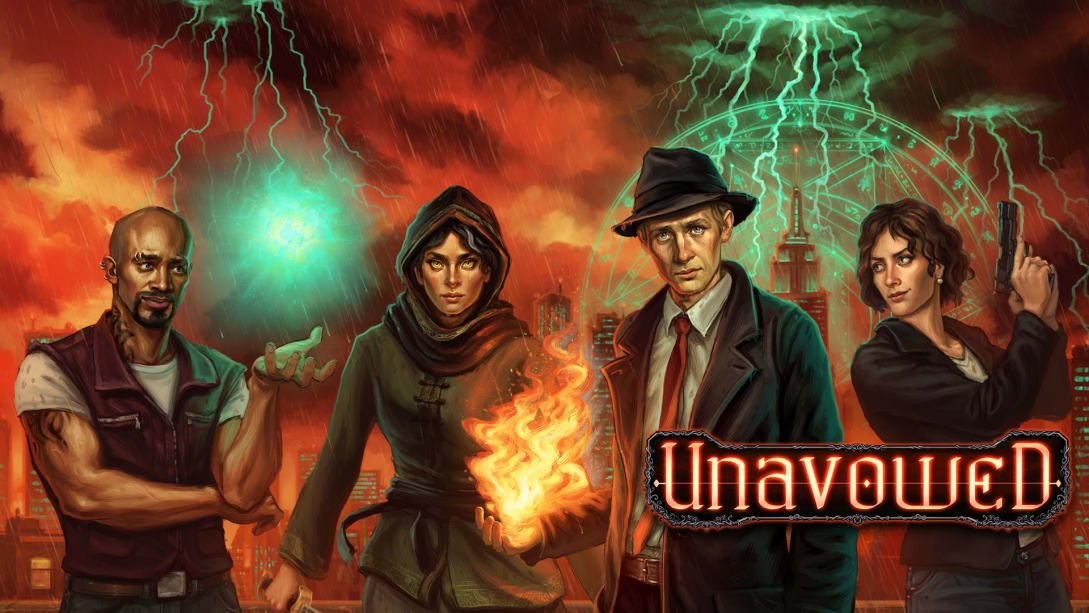 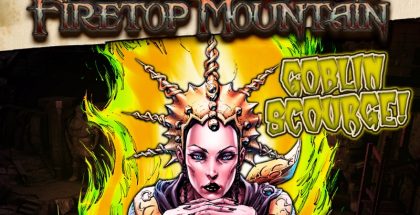 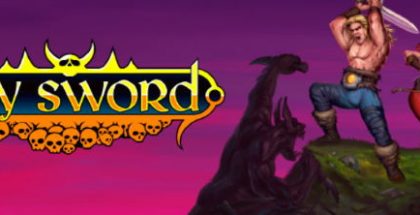