Never before released outside of Japan (where it is known as Growlanser IV: Over Reloaded) and widely considered the best entry in the long-running franchise, this PSP system iteration of the fourth chapter in the Growlanser saga tells of a land — once rich with culture and technology — long ago nearly obliterated by evanescent divine entities. Blending a sprawling 40+ hour narrative with over 40 different possible endings; deep tactical RPG mechanics; the character designs of the legendary Satoshi Urushihara; and a host of enhancements over the original release, Wayfarer of Time continues the proud ATLUS tradition of epic adventures set in breathtaking worlds.

I’ve been a fan of the Growlanser series for a while now, and I was very sad when the fourth entry in the series was kept Japan only. The Collector’s editions for Growlanser Generations and Growlanser Heritage of War are some of the best ones I’ve ever seen, and are some of the last REAL Collector’s Editions (you know, before every bonus turned into 0s and 1s that don’t add much to the package). Growlanser IV is finally available outside of Japan, and I have to say the game has stood the test of time thanks to the extras and improvements brought by this PSP RPG.

Before we dive into the game, lets meet the protagonists of our story:

REMUS – A young boy found in the middle of a forest by Crevanille and Regina. He’s felt indebted to Crevanille ever since, and has not left his side, going so far as to enter the mercenary brigade with him. He maintains an aura of optimism and kindness.

Crevanille– Brought into the Alten Schwart mercenary brigade at a young age, he was raised by Dixon as if he were his son. Then, on the day that Dixon informed him that he was the “key to stopping the Angels”, he became wrapped up in a battle for mankind’s survival…

Frayne – A survivor of a civilization from 2,000 years ago. Known as a Ruin Child, she seems related to Crevanille, but has forgotten much of her past.

She is a woman of nobility who at first appears serene, but that eventually reveals herself to be feisty and quick to anger.

Though a bit ignorant of the world at large, she’s a good person at heart who truly cares about her friends.

Ok, now that you’ve gotten to know a bit more about the people that will eventually make up your adventure party, and that you’ve got a better understanding on the type of personality that each one brings to the table, it is time to get back to this review. 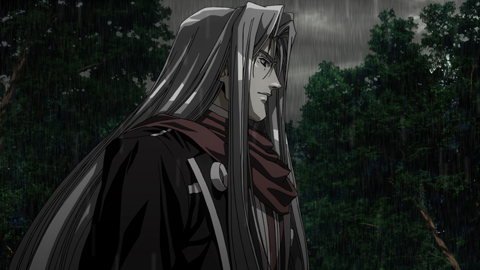 The game has been improved thanks to all the work done for this PSP release. New animated cutscenes help tell the story, extra events have been added to the game to better flesh out the story and there are now 40 possible endings when all said and done, all depending on your choices made during this huge RPG. All conversations will eventually have a consequence, and talking with the members of your party can help you improve their friendship, thus unlocking more character endings. 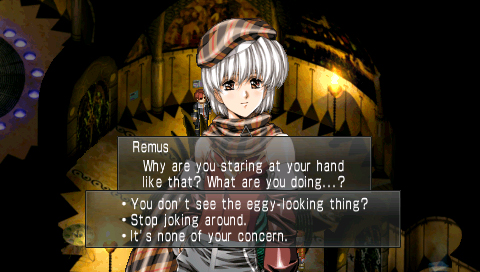 As has always been the case with the Growlanser series, the characters are the center around which the whole game revolves. Luckily, they lend themselves nicely to the huge storyline that is in place for Wayfarer of Time. As you can tell after starting to read this review, two of your party members are very special indeed, a they are actually Ruin Child, members from an ancient civilization that had laid dormant inside some of the ruins that are locked to anyone but the Ruin Child themselves. The story is filled with twists and turns I will not spoil here, but rest assured that by the time you reach the end, you will have gotten more than your money’s worth of thrills, excitement and fun. 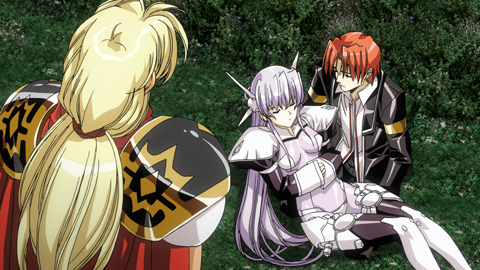 The game takes a page from Chrono Trigger in that all battles take place on the actual screen you’re walking on, without being sent to a different battle screen. Get close enough to an enemy? A battle is triggered and you must now fight to death… or until a character arrives to save you from imminent defeat, as per the script for the story. Once a battle starts, you issue an order to each of the members of your party, and they will continue to carry that out until you give them a new order (except when using an item). You must balance out your commands because having everyone go on the offensive will quickly have you reach the game over screen. For example, Remus will start with a Bow for a weapon, which means he can start attacking enemies from far away. This can allow you to move Crevanille near Remus to attack enemies that have close range weapons since by the time they reach you, one or two hits should allow you to defeat them. But the same also applies the other way around, and you sometimes have to sacrifice the HP of one character in order to get rid of characters that are using a long range weapon, or that are casting spells. Speaking of spells, you should know that they are VERY powerful alternatives to melee attacks, but you are helpless while you’re casting. If one or two enemies are close by, you better not start casting a spell, or you’ll be dead before you can even get one shot out since you also take EXTRA DAMAGE while casting. 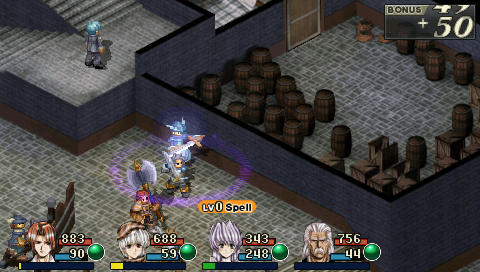 An interesting aspect of the Growlanser games is how the story almost never stops, not even during a fight. You can be knee deep in slugs or enemy soldiers, and the game will throw in a nice extra objective by introducing new characters, monsters or both, and you are tasked with either defending them or defeating while, at the same time, juggling your previous enemies. It is a very deep system that never gets boring and that keeps you on your toes at all times, and something I really like about the series as a whole. 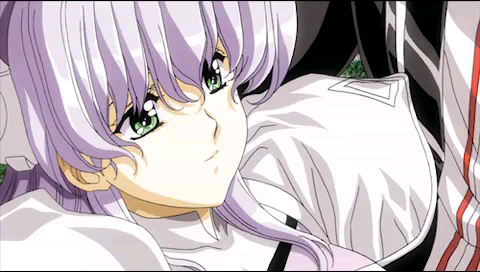 Growlanser: Wayfarer of Time is a welcome addition to the awesome RPGs available for the PSP. Atlus made the right call in bringing this game out of Japan, and the amount of content you get for the low price makes it easy for me to recommend the game. A rich story, great animated cutscenes and dialog choices that matter will keep you happily busy from start to finish.

[review score=”91″ pros=”Great storyline.
Lots of different outcomes.
Finally having this game available in the US” cons=”Sometimes shows its age here and there”]

This review is based on a PSP copy of Growlanser: Wayfarer of Time provided by Atlus.