Sony wrapped up their TGS 2012 presentation with a few announcements last night. It all started when Andrew House, President and Group CEO of SCE, got on stage unveiling a new, redesigned PS3. The new PS3, approximately 20% smaller and 25% lighter than the current PS3, will be available in 250GB and 500GB models on September 25th in North America. The 250GB will go for $269.99, as part of a limited edition bundle featuring Uncharted 3: Drake’s Deception Game of the Year edition, and a voucher for more than $30 worth of digital content for Dust 514. As for the 500GB model, it will be available in a limited edition Assassin’s Creed III bundle on October 30th in North America. Both models will be available in Black and White.

Sony announced October 3rd for the launch of PlayStation Mobile in the United States, Canada, United Kingdom, Japan, Australia, Italy, Spain, Germany, and France, with more to follow in the future. According to Sony’s press release, 30 games will be available at launch.

Official Version of PlayStationÂ®Mobile SDK Will Be Available in November

TOKYO, Sept. 19, 2012 /PRNewswire/ — Sony Computer Entertainment Inc. (SCE) today announced that it will start to deliver dedicated content for PlayStationÂ®Mobile, delivering the world of PlayStationÂ® on open operating system-based devices*1, through PlayStationÂ®Store on October 3. In the dramatically evolving smartphone and tablet market, SCE will offer appealing PlayStation-like content to a variety of popular mobile devices.

The service will start in nine countries including Japan, United States, Canada, United Kingdom, France, Germany, Italy, Spain, and Australia with more countries to follow. At launch, users will be able to enjoy approximately 30 new titles from a variety of genres including Adventure, Action, Puzzle, Sports, and Simulation, at an affordable price point of between 50 yen and 850 yen (including tax)*2, created by third party developers and publishers as well as SCE Worldwide Studios. Further content will be released frequently for PlayStationÂ®Mobile as new titles become available.

SCE also announced Fujitsu Limited and Sharp Corporation will join the PlayStation Certified license program*3. By collaborating with Fujitsu and Sharp which not only have the significant share in the Japanese smartphone market but also offer a wide range of devices across the globe, SCE will deliver the unmatched PlayStation experience to even more smartphone and tablet users around the world.

“We are very pleased to be able to offer exciting PlayStation-like gaming experiences through our products to the customers all around the world” said Itsuki Kouchi, Division Deputy General Manager & Marketing Department General Manager, Global Product Development Center, Communication Systems Group, Sharp Corporation. “Sharp will continue shaping its smartphone development philosophy, “Feel Logic”, and one of its elements, “Feel Creation”.

SCE will further accelerate the expansion of PlayStation Certified devices and continue to collaborate with content developers to drive the delivery of compelling entertainment experiences through PlayStation Mobile.

*2 Prices in Japan based on the information as of September 19.

*4 The fee is for the US market. The fee differs by countries and regions.

PS Plus will launch on the PS Vita this November. If you are an existing PS3 PlayStation Plus subscriber, your subscription will carry over to the Vita. In addition, PS Plus members on Vita will receive access to a brand new Instant Game Collection:

Instant Game Collection will bring you Unlimited access to a regularly refreshed selection of the full versions of games, as long as your membership is active.

Sony also showed off two new colors for the PlayStation Vita, Cosmic Red and Sapphire Blue, which will be available only in Japan on November 15th, 2012. 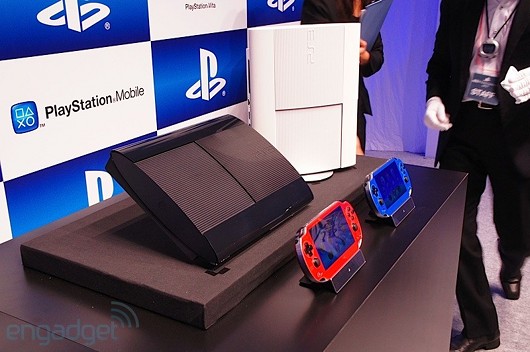 By purchasing a PlayStation Plus membership on PlayStationÂ®Store, PS Vita owners will be able to play free games, receive discounts for select titles, and enjoy other benefits unique to the service. A variety of convenient PlayStation Plus subscription options will be available in each country and region, including a 30 day plan (Japan: 500 yen, Asia: HK $38), a 90 day plan (North America: $17.99, Europe: â‚¬14.99) and a 365 day plan (Japan: 5,000 yen, Asia: HK$233, North America: $49.99, Europe: â‚¬49.99), meeting the different gaming needs of PS Vita owners.

PlayStationÂ®3 (PS3Â®) owners with existing PlayStation Plus memberships, as well as first time members through PS Vita, will be able to enjoy PlayStation Plus features and services on both PS3 and PS Vita systems at no extra cost*1.

PlayStation Plus features and services for PS Vita include*2:

SCE will continue to strengthen and expand PS Vita platform to meet the gaming and entertainment needs of PS Vita owners.

PlayStation, PS3 and PSP are registered trademarks of Sony Computer Entertainment Inc. All other trademarks are property of their respective owners.

Sony also announced a bunch of new titles coming for the Vita in 2013. Titles such as Tecmo Koei’s new game “Toukiden”, a dark fantasy, samurai action title available for PlayStation Vita and PSP sometime next year.

As for Soul Sacrifice, a much anticipated title developed by Marvelous Entertainment and SCE Studios Japan, unfortunately, TGS 12 brought some bad news. Series Creator, Keiji Inafune, confirmed the game has been delayed until 2013 in Japan.

On a related note, Sony released Firmware Update 1.81 yesterday for the PlayStation Vita. Although we don’t have much information regarding the new update, you may want to download it to avoid being interrupted with a forced firmware download.

For more information and footage from TGS 12, stay tuned to PS3Blog.net.

The Father of Video Games Calls Current State of the Industry a “Disgrace&... November 8, 2011 | Sakinah