If you’ve ever played Transformers: War for Cybertron, you would know that, for being a franchise based off of a different media, it was actually a pretty decent game. It’s a third person shooter that took place during a civil war between the Autobots and the Decepticons. It allowed you to transform between robot and vehicle on the fly as well, which was often required during parts of the campaign. A little over two years later, High Moon Studios and Activision have added another title to this franchise, with the subtitle of “Fall of Cybertron.”

With the relative success of War for Cybertron, a bit was riding on the shoulders of its sequel to make improvements to the franchise for an overall better game. The question a lot of us are left with is whether or not the sequel lives up to these expectations or suffers from mediocrity. Be warned, this review may contain spoilers. 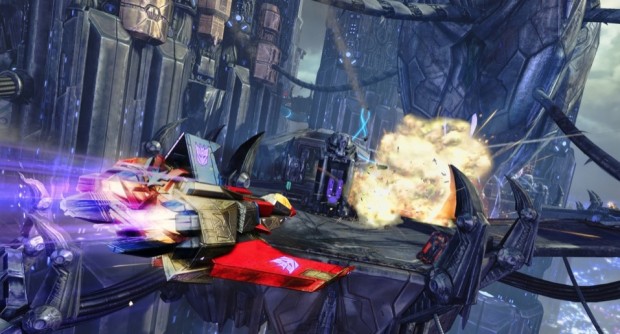 Gameplay is, of course, the most important part of a game. From the surface, the gameplay is generally the same, however, I had a few nitpicks with it. For starters, Fall of Cybertron doesn’t have a cooperative campaign like War for Cybertron had. This isn’t a deal breaker for most, but it would have been a nice addition regardless. Given some of the additions, though, it’s not surprising.

Anyway, one of the things I noticed was that the transition between forms seemed a lot smoother than what I remember from its predecessor. I thought it was very cool being in Votex’s vehicle form, swooping in from above, firing a couple missiles, and then switching to robot form as you fly toward the ground and decimate whatever Autobots remain.

In robot form, most of the characters had special abilities, including Jazz and his grappling capabilities or Megatron’s ability to hover in the air. Both forms also have weapons specific to each form, with separate ammunition counts as well. Finding more ammunition is easy enough. You can find plenty of pickups scattered throughout a level, namely from fallen enemies (they are ammunition types rather than for specific weapons). Currency is also attained this way.

Eventually, you’ll gain enough currency to also be able to purchase upgrades for your weapons (as well as new weapons, including those you may find blueprints for when exploring levels). These upgrades affect your standard fare, including faster firing rates (up to 75% faster) and damage capabilities. The only downside is that currency can take forever to build up, and you might use more of it for upgrading your robot attributes for health and shielding benefits more than your weapons. In fact, I think I only ever fully upgraded one weapon the entire campaign.

One of the biggest draws, of course, is the inclusion of Dinobots. To be more precise, just one Autobot, Grimlock. The downside is that he’s only available through one mission, where you try to rescue and work alongside the other three or four Dinobots. Grimlock’s T-Rex form, based off of what I saw in trailers, was a draw for me. I’m not going to lie. During this mission, however, you had to go through a lot of it before you could even use the transformation (it was basically an origins mission, and focused on you discovering your abilities over time and how the Dinobots came to be). 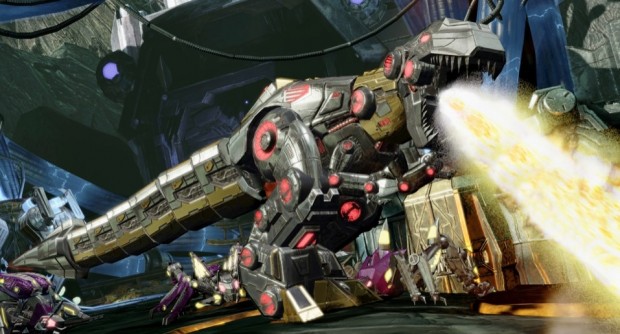 Once you were able to transform, however, I found that the controls were a bit clunky. Tail sweeping attacks, for instance, seemed slow to respond, but being able to essentially eat your enemies made up for that. Still, this was only through one mission, and he was the only Dinobot you could control.

Another cool feature was the ability to play as Bruticus, which is a very large robot form of the combined Combaticons. Basically, you’re a walking tank in these mission, destroying pretty much everything and everyone in your path. Heck, during one mission that has you switch between Autobot and Decepticon throughout, he’s even a boss that you’ll have to defeat. Sure, control of this guy was also a little clunky, but given the sheer size of him, it’s expected. The only Cybertronian in this game that is larger would have to be Metroplex, a giant, transformed building, that does certain attacks when you control Optimus to tell him to. Both of these were pretty awesome additions.

Overall, from a single player perspective, the game is pretty solid. Some might find that, because there’s a lot of alternating between both factions throughout the campaign, the exclusion of being able to start from either side of the war and play through a particular faction’s storyline first might detract. Personally, I think the alternations between them make the story flow a lot smoother, so you see both sides of the struggle throughout. If you remember War for Cybertron, you were able to start as either faction, but the first part of the story was told solely through Decepticon eyes whereas the second part was solely through the Autobots. What I was kind of disappointed with, however, was the relatively short campaign, which was another shortcoming of the last game.

Outside of the campaign, there are two other modes. One is multiplayer (which will be discussed in the next section) and the other is a survival mode by the name Escalation (which some might remember from the last title). In Escalation, it’s your job to fight off waves of enemies. Progressing through waves of enemies, and opening up other areas of the level, you gain access to other weapons and the like. There are a few popular Transformers in this mode that are only playable through here. 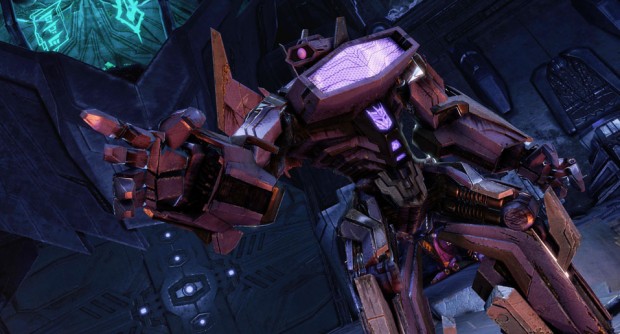 Multiplayer makes a return again. Of course, the aforementioned exclusion of an online co-op campaign was mentioned (this was made up for with the specialized campaign missions, including the two Bruticus ones and those that require special capabilities like Jazz’s grappling hook). For the most part, the muliplayer focuses a bit on user customization. There are 4 classes in all that you can, essentially, create your own Transformers for, each class with various strengths and weaknesses.

Progression through the multiplayer will unlock new parts for your Transformers, including famous, recognizable Autobot and Decepticon heads. Like single player, weapon upgrades can also be purchased, but the currency is separated from that of the single player campaign. You can choose from a number of combinations that, at least in robot form, are pretty unique, including colors (and you can choose to have a different color scheme to represent each faction as well). Some of the other players, who have spent more time ranking up and upgrading, have much more unique looks than what you can start with.

The modes themselves are nothing special. You have your deathmatches and capture the flag and all that. Nothing really sticks out, but based off of what I played, connecting to servers is relatively quick and the gameplay mostly smooth. I have noticed that some of the players I met, like most games, can be a little overbearing, having spent a lot of time in this mode and acquiring a number of upgrades. My kill to death ratio is embarrassing because of that.

There is some downloadable content to be had with this game that give players the ability to play as other Transformers in multiplayer modes. Back when I mentioned Grimlock being the only playable Dinobot in the game, that was only through the single player campaign. One of the DLC packs you can get unlocks three others for use in these modes. These are Slug, Snarl, and Swoop. I haven’t gotten this DLC, though, so I can’t say how they play in multiplayer. 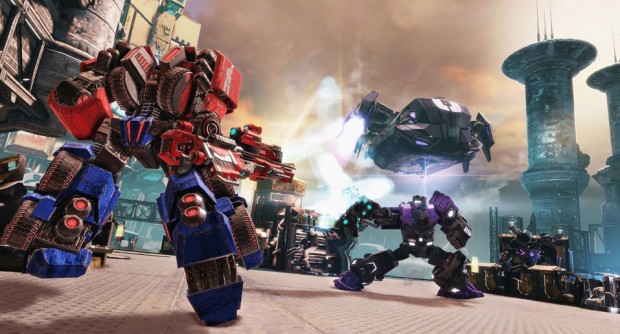 First off, from the surface, the improvements made in the graphics department don’t seem like much. I think the gameplay makes up for that, but overall, the game looks good and is a fitting style for the franchise. I won’t say that there wasn’t some problems, though. If you’ve played the demo, you would remember that framerate was mostly smooth.

On the full version, I’ve noticed some framerate drops throughout the game. Sometimes they were bad enough to bring up a “Loading” warning, which essentially pauses gameplay as it loads the next bit of the level/mission. It was an annoyance, and if I remember correctly, it happened to me a handful of times while playing.

Textures are fine as well, but sometimes took a little bit to buffer in some cases. Unlike the intermittent level loading, this doesn’t really detract from the game. Lighting is pretty nice, and the overall detail for this art style makes for some pretty cool stuff, especially the mission with Metroplex decimating Decepticon forces. Some background textures in the distance were somewhat lacking, though.

As far as sound goes, it’s not anything special. Weapon sounds, for instance, are your standard fare and seem recycled from other games. I think more detailed and varied sounds could have made the game more immersive. I mean, the game is loud, but loud doesn’t mean quality. Regardless, hearing that transforming sound was always cool.

Voice acting is done well. A number of voice actors from the last game, as well as other Transformers media, reprise their roles. Peter Cullen, unsurprisingly, returns as the voice of Optimus, but what was somewhat of a surprise was Gregg Berger doing the voice for Grimlock, which he hasn’t done in about 25 years. Nolan North, which many of us recognize as the voice of Nathan Drake, also lends his voice talents as Cliffjumper.

As for the music, the various scores fit the missions well enough for me to not make any noteworthy comments about them, so I apologize if you expect anything from me in that department. 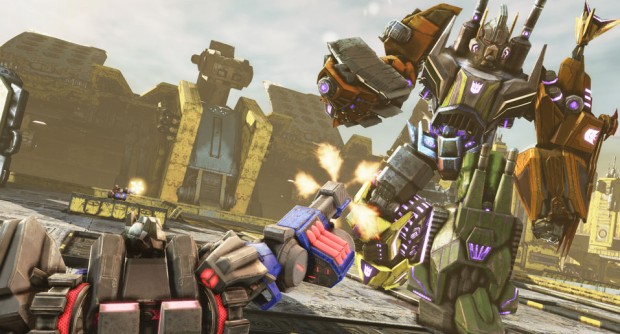 Overall, I believe High Moon did a great job on this title, despite a few shortcomings. Especially the framerate and loading issues. Regardless, it’s a notable fan service to those who are into the whole Transformers mythos. The story progression in this one is much more engaging than that of War for Cybertron, given that it alternated between factions, but I feel that it could still be, for the most part, forgettable. With that said, as far as the campaign goes, replayability might be a little low.

Multiplayer is solid, but lacking. The customization aspect of it is pretty attractive, though, so it could still bring a lot of interest to those who have always wanted to create their own Transformers. I may go back and try to unlock a lot more parts and purchase upgrades myself.

In the end, it’s a solid title that is at least worth a rental. Graphically, it still looks good (albeit, a little dated), and the sounds are somewhat lacking, but that’s besides the point. If you’re a fan of Transformers at all, or are a fan of third person action games, you might find some enjoyment in this one. If you want a taste of what to expect, without having to deal with any large spoilers, I say check out the demo that is available on the PlayStation Store.

[PSN Review] Way of the Samurai 4