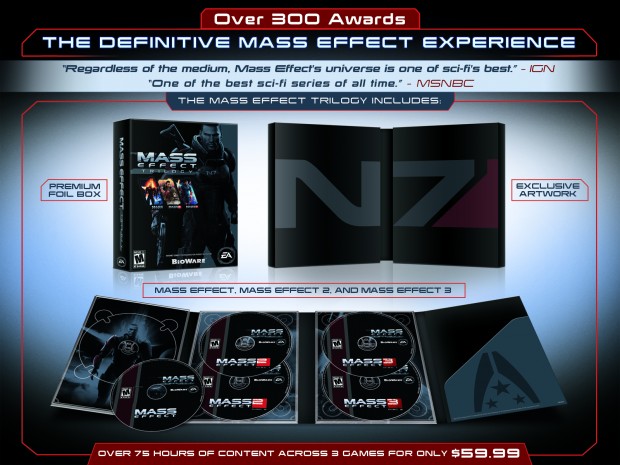 This is the Mass Effect Trilogy vignette. It is massive and will have effect upon you.

Although a date hasn’t been given for the PS3 release, Bioware has announced that Mass Effect will be made available as a standalone PSN title that will include trophy support.

All my fellow backlog gamers who haven’t yet dipped their toes into the Mass Effect, will finally have the opportunity. For me, this is one less reason to acquire another console. Personally, in an utterly rare show of enthusiasm, I think this might be the first game I will have pre-ordered in 5+ years, or at the very least, I think I’ll buy this week 1.

Bioware also announced the very first annual N7 day on November 7th, which will include: in-game, online and other live events to be announced closer to release date.

Over 75 hours of Mass Effect finally on our console of choice. Are you excited? Has it been too long? Have you already bought and/or played any of the games yet? Let us know in the comments below.