Music games have all but come and gone but one of the most steady and prolific outside of the perennial Rock Band has been SingStar, which actually predates the first Guitar Hero from 2005 by a year. Studio London has maintained SingStar almost continuously (since 2004 in the PS2 era they released numerous discs and with the current generation of consoles they’ve released biweekly if not more frequently handfuls of downloadable tracks), and they’ve even made all PS2 releases backwards compatible. Every SingStar disc (PS3 or PS2) can be hot swapped into a live Singstar game, making those old collections still useful.

And yet it now seems that there will be an end of an era. The SingStar Viewer, which was first announced in December 2009 is to be no more. The application allowed users to access the SingStar community without having to load a disc into their systems. This let the thousands of players around the globe rate, and upload, each other’s video clips as well as actually purchase new songs without having to get up. It was a wonderful application and, apparently, its time has come. 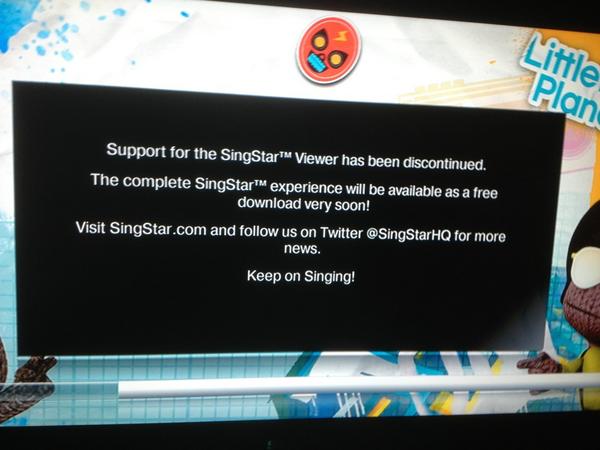 The Singstar Viewer is dead. Soon we'll have a whole new SingStar

The picture above hints that the Viewer has become obsolete in light of a new application version of SingStar. This does jive with their message that the next change planned with SingStar was to transform it from a franchise dependent on disc releases to a business model more akin to a service. As a loyal and current fan of the franchise the only thing missing is the extremely unlikely import option. Much (often unappreciated) effort has been put into getting the entire library available digitally but many tracks remain disc only, thus forcing those of us who can and would spend money, to use a minimal number of discs, to either lose songs by abandoning all but one launch disc or keep legacy discs just in case someone wants to sing “Only Wanna Be With You” by Hootie and the Blowfish … and anyone having a SingStar Party knows how important it is to have the widest selection of songs available (in order to coax those wallflowers into taking center stage). For those who may question this lack of import feature it has to be recognized that the licensing rights of music have changed dramatically since the PS2 era and it may simply not be possible or worth the hassle for their publisher to acquire the rights, nor feasible to implement a solution. SingStar discs never came with registration codes like the band games have, which presents a new hurdle.

SingStar updates can be tracked by following the official twitter account @SingStarHQ or by checking periodically on the website from which you can see the entire track catalogue, or the latest community videos. Sign in using your PSN credentials and you can rate videos even if you don’t own any SingStar games.

@wolfkin You could say that… News coming your way next week, I should think.

Officially we only know that news will be coming next week. Until then, if you have never played a SingStar game I highly encourage you to do so. The discs are VERY cheap at this point and, unlike the band music games, it’s a lot easier to store two mics (EU players have the option of wireless mics) than it is to store your drum kit. Songs are usually $1.50 vs $2 and Song Packs will a) Save you $0.50 and b)give you more medleys. Singing requires almost no skill and with such a low barrier to entry it’s bound to be fun for any audience.