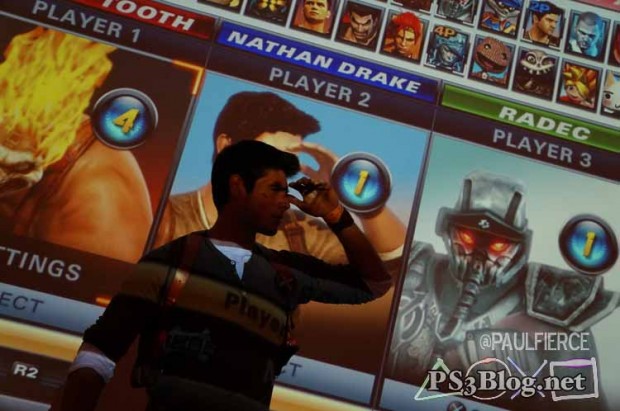 Sony Santa Monica Studios and SuperBot Entertainment together with iam8bit celebrated the upcoming title PlayStation All-Stars Battle Royal with a community event in Los Angeles. Dubbing it “LA beatdown” the event had a gallery showcasing “personal” items from some of the fighters. Items such as Sweet-Tooth’s Mask and Dynamite, Sackboy’s Cardboard rocket, and Heihachi’s hair gel (yes, hair gel).

Attendee’s were treated to complimentary drinks, a chance to speak with the developers, game play stations, and took photos in a photo booth with various props from the games characters. Among some of the notable attendees were former Capcom, now Sony Santa Monica studio’s lead game designer Seth Killian, as well as SuperBot Entertainment’s game director Omar Kendall and their president Chan Park.

I spoke with Seth Killian and he did confirm that the 20 characters are the only characters that will appear in the game. I tried grilling him about the final boss however he remained stoned face and said nothing. I was observing game play and one of the stages had Metal Gear Ray (Revengeance version), crashing through the background. (Where have I seen that before?)

I had a great time and it was finally nice to meet some of the Sony PR that I usually talk to through email. Special mentions goes out to my good friend Andrew costuming as Nathan Drake, Sarah as Kratos, and Heather as Sweeth-Tooth. PlayStation All-Stars Battle Royal will be available nationwide November 20, 2012.

Hit the jump for some exclusive pictures!