My interest level for Zone of the Enders HD collection was very low at first. When Konami announced that the collection will include the demo for Metal Gear Rising Revengeance, my level of interest shot sky high. The original ZOE was released along the same time as the launch of the PlayStation 2. This time around, the HD re-release is also accompanied by Zone of the Enders: The 2nd Runner, the sequel to the original.

I don’t remember much of ZOE. I remember seeing a magazine ad and all I could focus on was the Metal Gear Solid 2 demo announcement. I did buy the game when it was first released, just for the Metal Gear Solid 2 demo, and tossed the ZOE disc to the side. ZOE is as basic as it can get. Storyline is much like any other anime that was produced. Typical simple boy stumbles upon the Oribital Frame (the giant robot in the series), tragic stuff happens, boy becomes hero.

But what ZOE lacks in story it makes up for in gameplay. The controls are so easy to master that a young kid can play it. Although up-converted to HD, the graphics are still blocky and you have to endure cut scenes similar to PlayStation 1. It is so hard to force yourself to time travel, so to speak, to play such old games, however if you want to up your street I.Q. regarding Hideo Kojima’s games, then you cant go wrong with this one.

Zone of the Enders: The 2nd Runner is basically everything ZOE was not. Konami added more mechs to fight, more enemy drones to pummel, and added anime cutscenes in to the fray. ZOE only had you battling 2 to 3 enemy drones at a time, whereas ZOE2 has you shooting down swarms of them. The newly improved cut scenes and the voice acting is where this game stands out. Konami basically took what they didn’t do in the first ZOE and implemented everything they could into ZOE2.

Like I mentioned before, ZOE only had you battling 2 to 3 drones at a time, in ZOE2, drones come at you in waves, with no signs of slow down at all. The boss battles are fast enough to make you go nuts! You really have to pay attention to every sword swipe or lasers the bosses throw at you because you’ll find your life bar depleted in a matter of seconds. How do you avoid damage? With ZOE2, controls are simple to master; everything is a breeze. From dodging, melee, close quarters combat, to long range combat; everything can be done with a push of a button.

Zone of the Enders HD collection is a must have for those who want to experience Japanese Games when they were on top of the world. Its storyline, although cliche, is very much up to par even with today’s games and its fast paced action is delivered to the player in a way where the learning curve is easy to master. I cant help to feel that this re-release of the game is nothing more than just a refresher course for an upcoming rendition and also to educate the masses of gamers who are now of age that never got to play this classic. 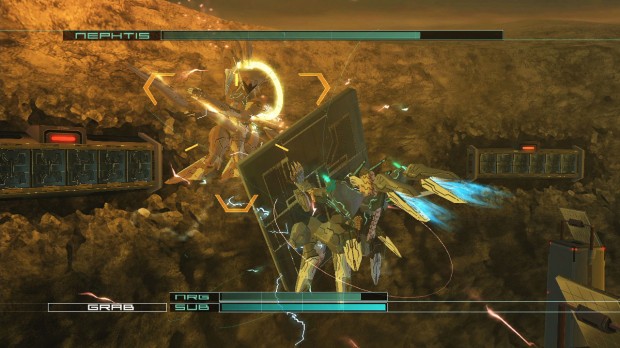 This review is based off of a retail copy of Zone of the Enders: HD Collection purchased by reviewer