Down on his luck as a struggling gramophone salesman, Barry comes across the “secret” laboratory of Legitimate Research, a corporation dedicated to developing crazy new technologies. Seizing the chance to become a hero, Barry begins his ride after commandeering a jetpack and making good his escape, where the player jumps in and guides his adventure with accessible one-touch gameplay.

Along the way, players must avoid lasers, missiles and electro zappers, all the while grabbing coins and trying out even more ridiculous vehicles â€“ Lil’ Stomper, Profit Bird and the robot dragon himself, Mr. Cuddles!

Supporting the action is a robust Stash system, where everyone can track their progress, upgrade their gear and buy new gadgets for Barry. Grab one of many jetpacks including the classic Machine Gun Jetpack or the colorful Rainbow, suit up in a vast wardrobe of unique costumes and make sure Barry’s best friend Flash comes along for the ride!

It starts out as every other Auto runner out there: the character you control (in this case, Barry) runs and runs automatically and can’t stop until he is hit by a deadly obstacle or a hazard. But, two seconds into the game, the first twist is introduced: Barry has just grabbed a Jetpack and you can press the X button to activate it and keeping it pressed maintains Barry airborne. 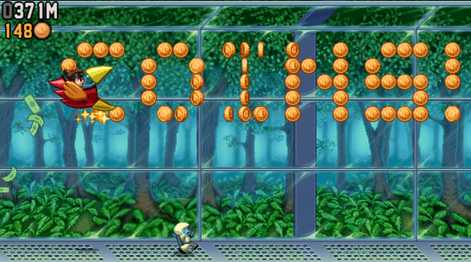 Sounds fun, right? Well, that’s just the start. You can grab special vehicles along the way that add a new way to play, as well as an extra hit that can protect him from harm. In order to avoid spoiling the surprise, I’ll only say that one of them gives Barry a motorcycle and a costume that makes him look just like Arnold on Terminator 2…and it gets crazier after that.

Collecting the coins you’ll find along the way will let you purchase one use items to improve your odds, new jetpacks or clothes, or even upgrades such as a bouncing ball that makes it possible for Barry to continue to move ahead for a bit collecting extra coins.

Other items to collect are the special coins that you can either cash out at 50 regular coins each or spin a slot machine that can reward you with: coins, double the coins collected during your next run, a bomb that sends you flying ahead (yes, while dead), an extra life that revives you right there on the spot, and other items for your benefit.

Eveything sounds good but, why replay the same game over and over again? Well, Jetpack Joyride adds “missions” to your runs. Each mission has a specific goal for you, and it rewards you with Stars that upgrade your rank. One of them could ask you to collect 100 coins in the same run without dying, another might require you to grab the same vehicle 5 times total. And the best part is that you’re given new ones are given as soon as your current ones, with some crazy goals (die by hitting the first obstacle in the game, five times in a row, without flying? Sure, why not?). 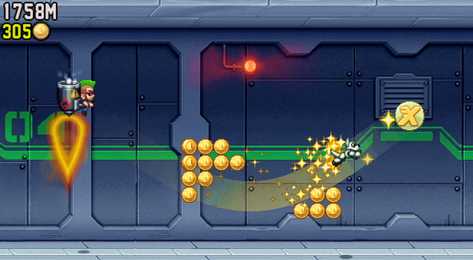 Jetpack Joyride is an entertaining game that you can either play in short burst, or enjoy for several hours at a time. Trying to beat all missions, improve your high score, purchase new items, costumes and power ups and going up down and all around with your Jetpack will allow you to get the most out of your purchase of this very fun autorunner.

[review score=”85″ pros=”Fun game that adds something new to the genre.
Lots of missions to test your skills.” cons=”Could have used more background music.”]

This review is based on a PS3/PSP version of Jetpack Joyride provided by Beatshapers.

Access the PSN Store from your browser (EU Only)