The game opens with a happy image: it is our hero’s wedding day, and he and his wife couldn’t be happier… and it is then that the evil bad guy enters the scene and kidnaps the bride. What is our hero to do? Go out and rescue her! It is a story as ancient as time itself, so lets skip the story and get right into the game and what it has to offer.

Labyrinth Legends keeps things simple by asking you to get from point A to point B in order to exit a dungeon. But in order to keep things interesting, what you need to do to GET to point B changes from level to level. At first you just need to reach the exit, but later on you will need to find keys to unlock doors, switches that need to be activated, floor panels that must be pressed by objects or special runes that must be activated by the magic of a mage companion you will find in some dungeons during your adventure. 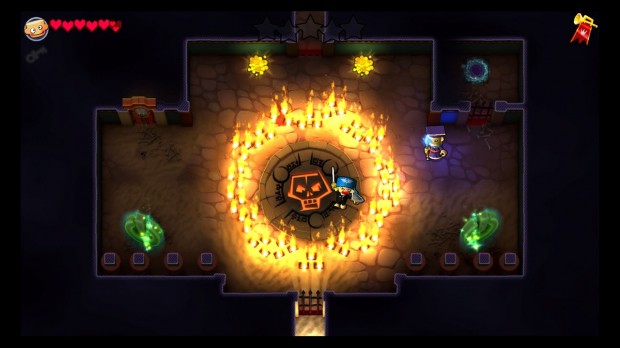 The first dungeon will help you to get to understand how to control our hero. The most important thing you have to learn right from the start is that you can’t just go hacking and slashing at every single enemy that you find since this will only allow them to kill you in a matter of seconds. One enemy you can deal with, but 2 or more will be a problem if you don’t learn how to dash in and out, defend and use your special spinning attack (with the Triangle Button) to damage several enemies at once.

Every so often you might find a new piece of equipment that will give you an extra bit of defense against the hordes of monsters, which means that when you ARE damaged you will lose part of your defense bar instead of your HP bar which is a good thing because your HP can be refilled, but your defense bar cannot. Once it is gone, it is gone until the next dungeon, so be sure not to rush into danger. 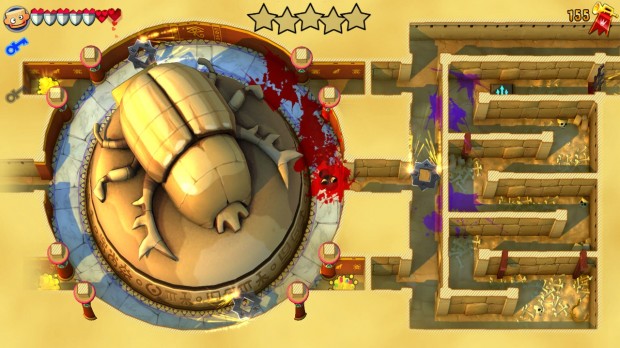 And speaking of danger, the dungeons are filled with deathtraps that are out to kill anyone that is too clumsy to avoid them… including the monsters that populate the dungeons. Spikes, fire pits, huge metal spheres and buzz saws will obliterate anyone dumb enough to come into contact with them, which can be a blessing and a curse since a smart hero can lure monsters to their doom, but a stupid hero will dive into its deathbed without hesitation. Being cut in half by a buzz saw is not Game Over, but it does make your HP bar go down A LOT. 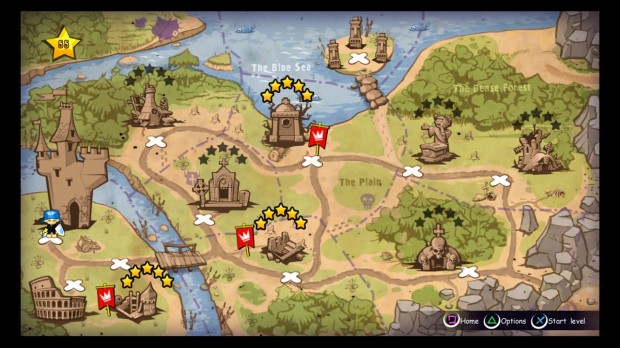 You will notice that dungeons in the map above have stars over them, and this is very important for your quest. You see dungeons are LOCKED, and you must collect stars in order to open them up for you to explore. Some stars are out in the open just waiting for you to grab them, but most of them are hidden in secret areas, behind walls that aren’t really there, locked up in heavily guarded rooms or awarded to you for special actions. For instance, one star could be on the other side of a room behind a gate, and you must then solve a short puzzle to open up the gate. Another star might only appear if you kill all enemies in the room in a single move such as, say, triggering a switch by moving behind the enemies thanks to a hidden passage and the switch burns down all enemies at once.

If you are killed, you must start all over picking up any stars, keys or armor you might have found. There are no checkpoints and each dungeon must be completed in order to have the game autosave your progress, but at no point does this become frustrating. Since each level can be completed in a matter of minutes, replaying a particular dungeon once or twice is not going to be a problem. The fact that the game is fun and fast-paced also helps. 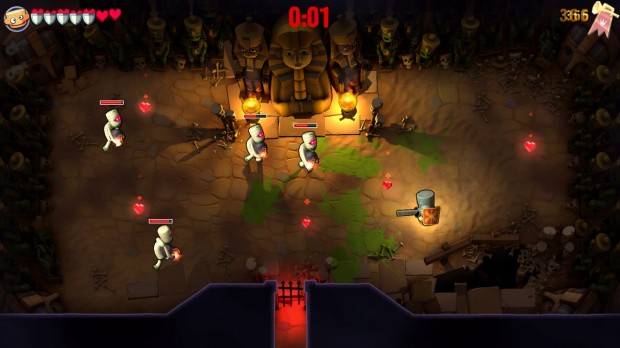 The multiplayer modes are fun and even more hectic than the main game and do help to extend the time you spend playing this thanks to offering the chance to play with up to 4 players at once. All in all, you can probably unlock every trophy the game has to offer in as little as 4 hours if you’re REALLY good, but most players will take an extra hour or two to find every single star in the game.

Labyrinth Legends is a fun, hectic and fun (yes, its twice as fun as games with a single fun) that will provide you with enough content to validate your purchase. You won’t have to worry about stat balancing, unlocking skill slots in a skills tree or finding the right elemental blade to do the most damage to a particular enemy or boss, and that is a great change of pace from other games. Creat Studios did great work on this game and hopefully we can get a sequel out of them.

Fast-paced and to the point.” cons=”Game will tear you apart if you don’t learn to block and dodge”]

This review is based on a PS3 copy of Labyrinth Legends provided by Creat Studio.

Subscribe to PS+ and get 3 extra months for free