One of the reasons that I really appreciate the company behind our beloved console is that Sony does a fantastic job supporting small, unproven game developers. Sony gave thatgamecompany a three-title contract that resulted in the fine trifecta flOw, Flower, and Journey. In 2008, Sony made a similar deal with Giant Sparrow, and their first title, The Unfinished Swan (released exclusively to PSN on Oct. 16, 2012) is a winner. 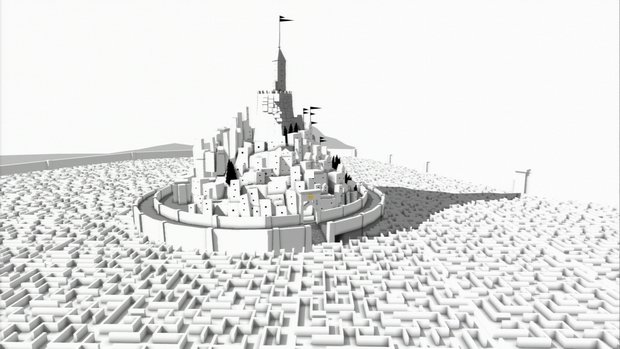 The Unfinished Swan is an austerely beautiful storybook adventure puzzler with some wholly original game play mechanics. You may have heard something about the gameâ€™s signature mechanic: You adopt a first-person view of an entirely featureless white world, and you press a button to hurl a blob of black paint that splatters on contact, allowing you to make out the geometry of the environment around you. I found this to be quite a satisfying experience. Youâ€™re given a blank canvas, but the canvas has an underlying structure waiting to be discovered. 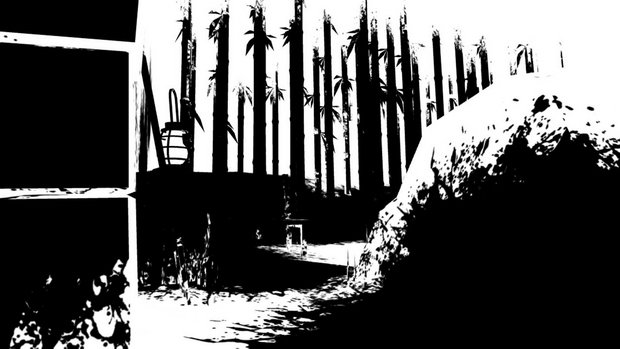 The game controls are really quite simple. The analog sticks control your movement and perspective, just as in any FPS. All of the trigger buttons do exactly the same thing: hurl paint. X lets you jump. The game is Move-compatible, and youâ€™d think that the game would lend itself well to the wand, but I discovered (to my disappointment) that I preferred the DS3 controls. If one could flick the wand like a paintbrush, that might have been cool, but instead one simply uses the wand to point where one wants to go, and I felt a bit like I was navigating with a tank turret, which wasnâ€™t conducive to the fairytale experience. At any rate, the game is simple to pick up and play. My wife, who isnâ€™t much of a gamer, handled it with aplomb (and not a little enjoyment), and children should find the game particularly delightful and engrossing. 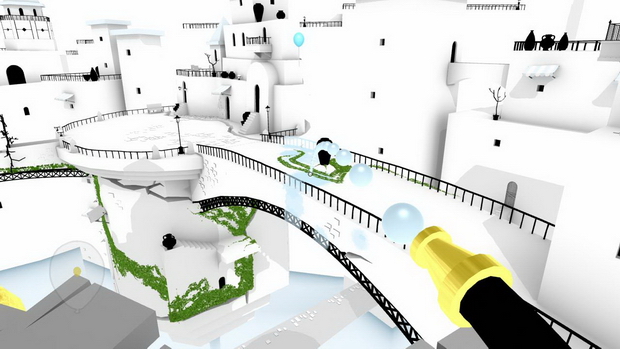 In the simple narrative of the game, you are an orphaned child whose mother, a painter, left him an unfinished portrait of a swan. The boy dives into the canvas, chasing the swan. Here he learns about his parentsâ€™ past in a storybook kingdom that features a friendly tyrant of a king who paints the realm into existence at his whim, much like a sort of latter-day Pygmalion. You discover the history of the king and of your mother by locating story panels scattered through the kingdom. When you see a golden letter on a wall, paint it to reveal a storybook page, which a narrator, who sounds like a kindly mother, then reads to you. Half of the fun of the game lies in progressively learning more of the narrative by finding those panels.

If the game was comprised entirely of white environments and black paint, the game would be innovative but something of a one-trick pony. Happily, as you progress in the game, environments become richer, and your paintbrush adopts new powers. In later stages, your watercolor brush splashes water, which allows you to control the direction of growth of giant vines that you can climb to reach otherwise inaccessible areas. Later still, my favorite brush allows you to draw boxes that then manifest physically, letting you create stairs, bridges, and the like. (This mechanic is reminiscent of Trine.) I love the different brushes; my one quibble is that you canâ€™t use all of them at once, toggling between them as you like. The levels are each designed to use one sort of brush. 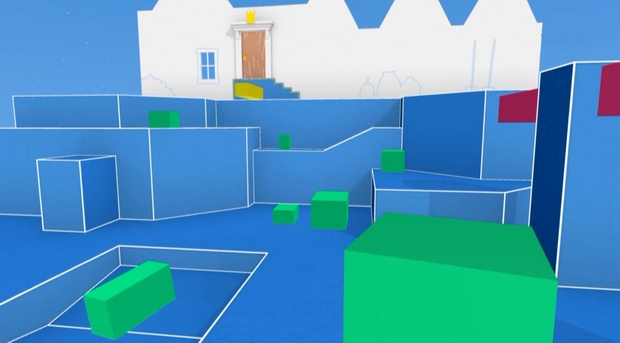 The game is perfectly charming and engrossing. You play not only to beat the levels, but to reveal more of the story, and to collect balloons that are scattered throughout the realm, often in hidden or difficult to reach areas. Collecting balloons allows you to unlock extras and in-game cheats, the most important of which is â€œballoon radar,â€ which helps immeasurably in finding more balloons. The balloons give the game some replay valueâ€¦ but not much. And the game is short-ish. I beat it in three or four hours, and I certainly wasnâ€™t playing quickly, as I was having so much fun splashing paint around and admiring the scenery. Also the game is by no means difficult. Itâ€™s designed to be accessible to children, but it can be a breathtaking journey for adults as well. 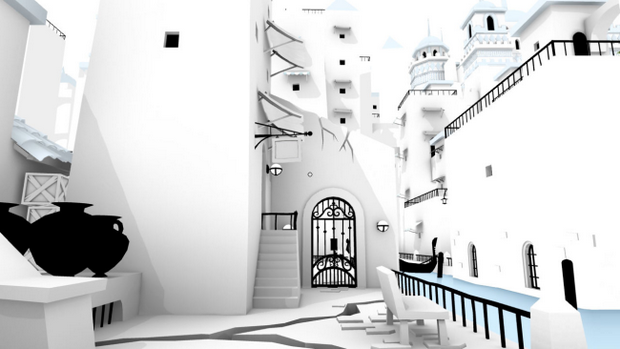 All in all, this is a refreshingly original game. Itâ€™s an affective experience in a similar vein to Flower or Journey. Itâ€™s not emotionally manipulative, and itâ€™s entirely non-dramatic, but to play it is to experience childlike wonder and simple fun. If you have any interest in original indie titles, give The Unfinished Swan a try. I donâ€™t think that youâ€™ll be disappointed.

Review based on a copy of the game purchased by the reviewer. 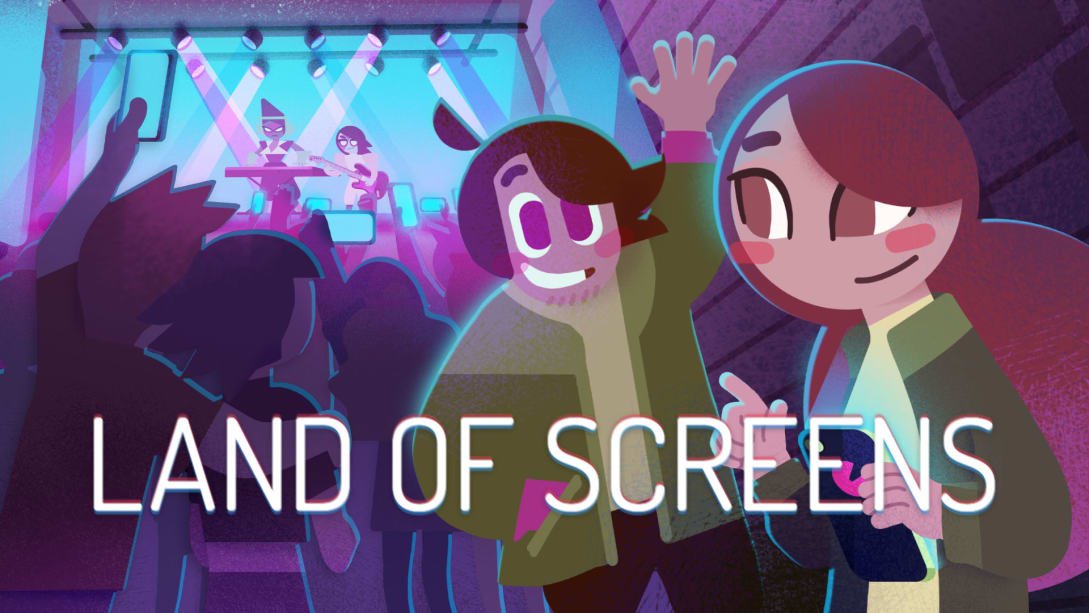 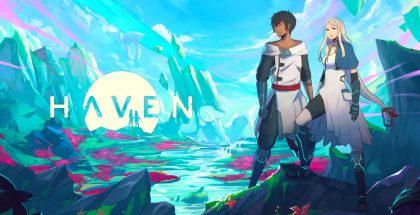 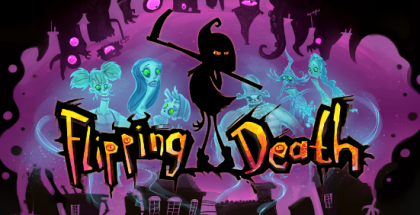