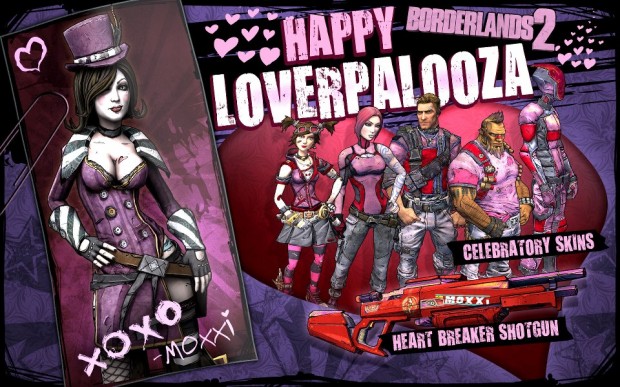 Gearbox is celebrating Valentines day with Moxxi’s Loverpalooza, and she has gifts for everyone! Costumes for everyone, and a shotgun!!

The celebratory SHiFT codes are below!

For years, Moxxi has delighted and excited Pandora’s denizens with her theatrical style, pithy innuendos, and a seemingly endless supply of exes. But when it comes time to give out anniversary gifts and every single day marks a possible anniversary with someone, what’s a poor girl to do?

Simple — the Loverpalooza! Today, everyone gets to be one of Miss Moxxi’s honorary exes. And Moxxi treats her exes well (apart from the ones she kills, of course) — on Loverpalooza Day, she bestows eligible Pandoran men and women with free stuff!

To receive your gifts from Miss Moxxi, enter the SHiFT codes below into Borderlands 2:

This year’s offerings include special celebratory skins — “Real Men Wear Pink” for Axton, “Tiptoe Through the Tulips” for Zer0, “Pretty and Pink” for Maya, “Pink Eyes” for Salvador, “Gumming the Works” for Gaige — that will be available in the Quick Change character customization station, along with a special version of Moxxi’s Critical Heart Breaker shotgun that will be the same level as (and appear in the backpack of) the first character you load after redeeming the code.

These codes will be active through February 17, 2013 — be sure to use them before them!

To learn more about SHiFT codes and how to redeem them, visit: http://support.gearboxsoftware.com/