The game is divided up into 7 chapters. Each chapter surprisingly asserts this strange unwritten importance of being stealthy despite its hack and slash appearance. Your play-through encounters will sometimes consist of evading, and sometimes downright slaughter, of all enemy combatants, in a jazzy engrossing way that only Blade Mode can deliver. Along the way you will be advised via, for lack of a better term, a “codec” by MGR’s supporting cast. They advise you as the story goes on about tactics and intel regarding your current stature.

This is where it get’s tricky, the cast. Given that the cut scene sequences were all supervised and produced by Kojima Productions, I feel like there was not enough scenes or information on the cast to inspire any type of connection. I would’ve loved to have had more detailed information in the game on who, what, and why these characters are doing what they’re doing. For example, one of the villains, Mistral. The French Desperado LLC PMC bad girl with more arms than the statue of Vishnu. Does she have a romantic connection with the stereotypical Russian, Dolzaev, or is it the other way around? Is it explained? Somewhat, but you are left wondering a lot of things about what the characters influences and motivations are. 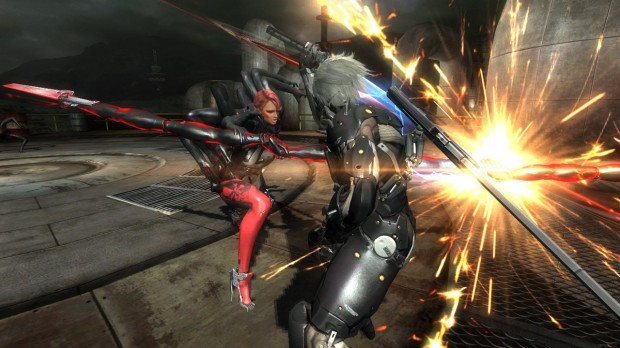 In a way this is good news for those yearning for a linear type of game. Maybe it’s because I have gotten used to the way previous Metal Gear titles stories were told, that I cant stop trying to compare them with MGR. Once you do set aside that comparison, you will be all set to experience what Metal Gear Rising: Revengeance has to offer.

Stages and areas are a little bit square, but the boss fights are downright mesmerizing. You are given enough space between you and your opponents to pull off a successful assault or a quiet infiltration. My personal favorite boss fight is with Sundowner. The setting has this eerie ambiance of Fatman in Metal Gear Solid 2, heliport and all, except he’s accompanied by an ultra annoying Helicopter Drone and there are no bombs to defuse.

There’s a ton of content in MGR that will leave you going back for a second, third, or maybe an even forth serving. Areas have locked boxes that require you to find the “key” so to speak. Those keys happen to be in the left or right arms of the enemy cyborgs. Key holders can usually be seen by activating Raiden’s “Augment Mode”. A blinking square indicates the corresponding carrier. Not only do you have to contend with other cyborgs in assaulting the key holder, but you also have to put in to account which soldier type it is and how are you going to cut that arm of? Terminal boxes are also strewn about the different stages that unlock VR missions and content. Some are in plain sight, some take a little bit of effort to find. If you do miss one, you can reply the chapter later on. 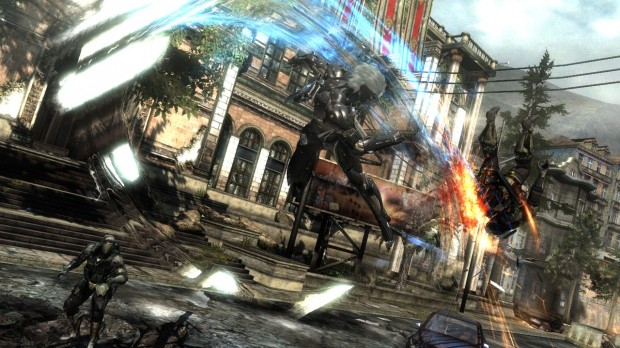 Metal Gear Rising: Revengeance is peppered with lots of Metal Gear franchise familiarities. There’s the pervo creep, the random Japanese model posters, heck there’s even high tech versions of the girly magazines now. Which by the way resemble those hologram things used by Princess Leia in Star Wars. The Star Wars references don’t stop there. I caught at least a couple. Whatever the intended or unintended references Platinum Games and Kojima Productions implemented, they all fit in very well. Early on you’re gonna love two key scenes that will make you chuckle in a nostalgic way.

Konami obviously is putting a lot of marketing and franchise power behind this tile. You can purchase shirts, key rings, mail openers, heck even a $500 watch. That way you can customize yourself. Just like how you can customize aspects of Raiden’s weapons, health, energy absorption, appearance, and moves. Yes you can run around wearing that Sombrero and Poncho as seen in the trailers. Among other outfits you can choose from are the Dedperado LLC skin, the pre-order incentive skins, like the Grey-Fox Ninja skin from GameStop and the Red Armor from Best-Buy just to name a few. 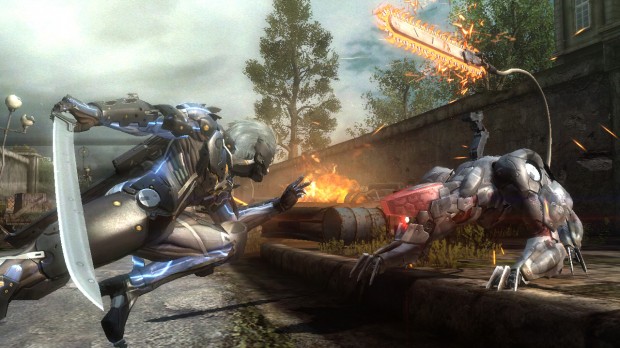 As expected from an action packed developer, Revengeance separates itself from the rest by having an outstanding Techno/Hard Rock hybrid soundtrack and an excellent coherent over the top presentation that Metal Gear franchise fans and new comers alike can enjoy.

Platinum Games did an excellent job developing this title. Their execution far exceeded my expectations and there is a certain addiction that I cant seem to remove tied in to the act of meticulously cutting up giant robots and cyborg soldiers to pieces over and over again.

[review score=”95″ pros=”Controls are well polished.
VR missions are Exclusive DLC for PlayStation 3.
With all the slicing and the dicing, frame rate stays in tact and not once did it freeze up or slow down.
You can pause/skip cut scenes.
Great music and audio.” cons=”New characters are a little too bland. I would’ve loved to seen more info on them, like a mini text Biography in game.
Raiden’s story is still a mystery.”]

This review is based on the final retail build PlayStation 3 version of the game provided by Konami.