Ni no Kuni: Wrath of the White Witch, a heart-warming tale of a young boy named Oliver who embarks on a journey into a parallel world in an attempt to bring his mother back from the dead. Along the way, Oliver makes new friends and adopts many of the wonderful creatures that inhabit the world, raising them to battle other creatures on his behalf as he takes on formidable enemies. Developed by LEVEL-5 alongside Studio Ghibli, the legendary animation studio, Ni no Kuni: Wrath of the White Witch combines beautiful animated visuals, masterful storytelling and a sweeping score into an epic role-playing adventure like no other.

Ni no Kuni: Wrath of the White Witch is the latest Japanese-RPG from game developer LEVEL-5 (Dark Cloud, Dragon Quest VIII, Professor Layton) and an anime studio called Studio Ghibli. This game is an HD remake of Ni no Kuni, a Nintendo DS game that was exclusively released in Japan in 2010 .

I’ve played through Ni no Kuni: Wrath of the White Witch completely and my experience with this game is one that’ll remember for a long time! Almost everything is perfectly done and even if there are a few minor hiccups through the adventure, this game is definitively one of the top PS3 JRPGs!

The game begins with a young boy named Oliver. A few days after a very sad event his favorite plush toy comes to life. This little guy calls himself Mister Drippy and claims to be the king of Fairies in a parallel world named Ni no Kuni. After hearing Oliver’s story, Mr. Drippy tells him that he has an idea on how to set things right again. After a little reflexion, he takes the courageous decision to follow the fairy into his world and thus begins a journey in which he’ll grow from the little boy he is to become Ni no Kuni‘s world savior. 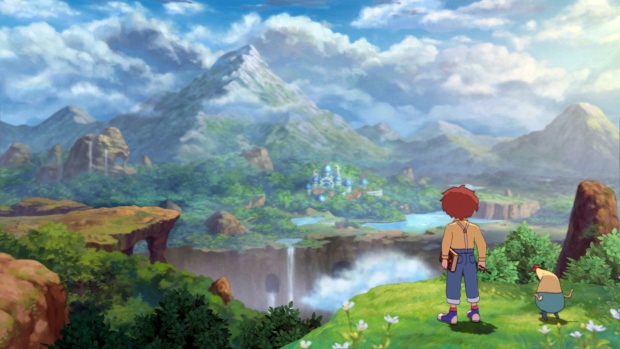 Ni no Kuni is a typical JRPG almost perfectly executed from the beginning to the end. This game is accessible and while playing through the story youâ€™ll be traveling to a lot of towns and dungeons, fight a ton of battles and bosses, and explore a huge world map!

The enemies are visible on the field (no random encounters!), and they can generally be avoided if you want to reach your destination quickly. Their re-spawn rate is quite high though, so when you meet a dead-end in a dungeon, you’ll notice that all monsters have already re-spawned on your way back and you’ll have to fight them again.

Battle system
The battles can be fought either by a human character or a “familiar”. Familiars are creatures that are recruited on the field and they will almost always fight in your place. There is a huge quantity of familiars to recruit (300+) and one of the most interesting aspect is that you can use anyone you want through the game. They can even be switched right in the heat of the battle if a different strategy is needed! 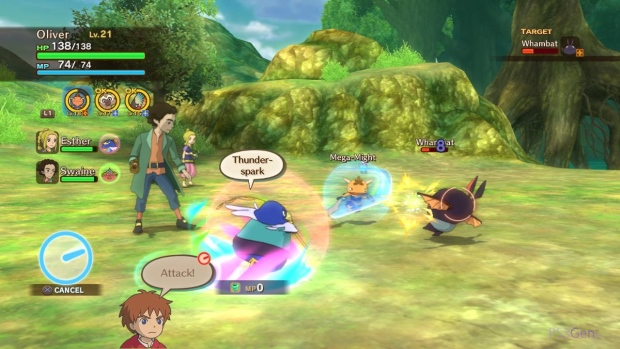 However, the battle system is plagued with a deficient AI that leads to unnecessarily-hard boss fights. Tactics can be changed at almost any time during a battle, but even with that I sometimes had the feeling they didn’t always respect what I asked them to do. More than once in those few hard battles, I finished with Oliver alone (the others characters were KO’d) because even if I revived them, they would sometimes go attack the boss instead of focusing on recovery.

Luckily, later in the game (a bit too late in my opinion), two new options show up: we’re finally allowed to switch from “All-Out Offense” or “All-Out Defense” at any time by pressing a single button, meaning that when a boss is charging a deadly attack, changing to “All-Out Defense” on-the-fly is definitively a life-saver!

Content / Exploration
After a few hours in the game I was surprised by the amount of available content. To begin with, a complete 300-pages book called the Wizard Companion is included within the game. This encyclopedia explains everything there is to know in the world of Ni no Kuni, it also includes a bestiary, and even tell stories based on the world’s mythology.

There are also a ton of side-quests that can be done when you want to wander outside the main story. A few of them are classic bounty hunts and deliveries (a man is rather flustered after misplacing his diary), and a few involve heartbroken people.

Being heartbroken in Ni no Kuni means that a piece of your heart has been stolen. Heartbroken people can be lacking enthusiasm or kindness (or any other of the 8 different conditions), and Oliver’s task is to restore people’s hearts to their former glory. This is one of the many areas where Ni no Kuni shines: this concept is intertwined so well in the main story that it almost becomes natural after a few hours of gameplay! 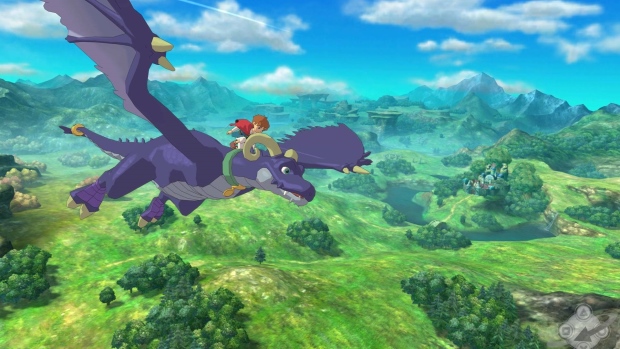 Hovering over the world

If you just want to have fun while wandering on the world you can try your luck with alchemy, but it can almost be ignored. It’s easy and super intuitive but alchemized items are not that much more powerful than the ones gotten from regular side-quests. I didn’t really start alchemizing until I was working towards the Platinum trophy.

In the second half of the game a coliseum and a casino open just in case you still want to have fun outside the main story. The casino contains classic slot machines, a Black Jack table and a pretty original game named “Platoon”. This one is really confusing at first, but very fun once you get the hang of it. When you get access to the casino, make sure to try it out!

Audio / Video
Ni no Kuni is among the best looking games of this generation! Every region of the world is gorgeous and the game uses a cell-shading engine running at a solid 60 fps. The world map is also totally awesome!

The soundtrack of Ni no Kuni has been written by Joe Hisaishi and is entirely performed by the Tokyo Philharmonic Orchestra. Every time you step into the overworld, the theme that plays still impresses way after having completed the game!

For the voice acting and the English localization, I’d have to say its near-perfect. Mister Drippy’s voice fits perfectly the character and at many times, Ni no Kuni feels like it has been designed from the ground up for an English audience! Oliver’s voice is okay, but the few lines he says in battle becomes repetitive quickly.

If you want to play the game in Japanese, you’re in luck: the Japanese voice overs are included in the disc! 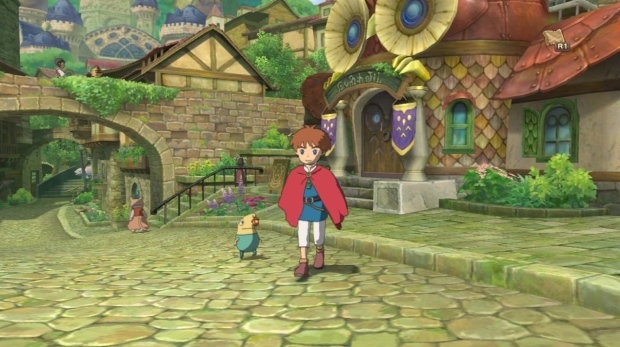 Post-Game
Once Ni no Kuni is completed (expect between 40h to 60h), the world becomes completely open and can be enjoyed to its full potential. A lot of hard bosses spawn everywhere in the world and all of the side-quests can be completed. I’ve achieved the Platinum trophy in 90 hours and while it wasn’t all that hard, be prepared for a lot of grinding for the latest trophies. One of the worst involves getting 10 times the rare drop of a rare monster!.

Final thoughts
Ni no Kuni is a gorgeous and truly awesome Japanese-RPG that kept me glued to my couch way later that I should have for a few weeks! The art direction by Studio Ghibli, the soundtrack by Joe Hisaishi and the gameplay by LEVEL-5 resulted in game that is a masterpiece.

If you haven’t tried this game yet and are into JRPGs, you can’t go wrong with this game!

Bonus: Behind the scenes videos published by Namco Bandai.
Inside LEVEL-5
The Art of Studio Ghibli
The Music of Joe Hisaishi

Interested in Ni no Kuni? If so, why not support us and buy it from our Amazon Store?

Disclaimer
Total amount of time played: 90 hours.
Game was completed and Platinum trophy was achieved before writing this review.

This review is based off of a retail copy of the game purchased by reviewer.