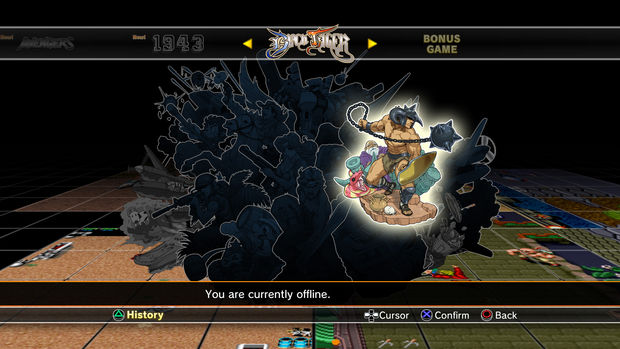 The third pack of games for CAPCOM Arcade Cabinet is ready for review! With this pack, you’ll get to play Side Arms, Legendary Wings and Trojan, three very different games that have their ups and downs. Let’s start with Side Arms. 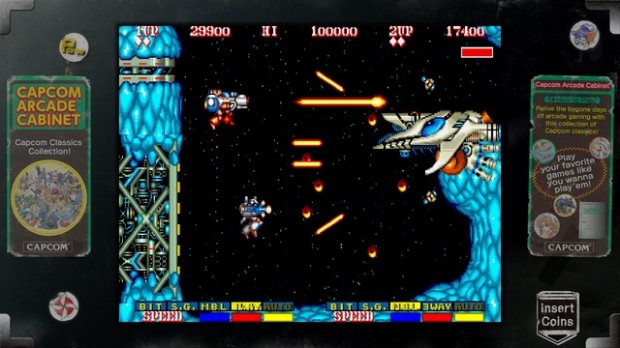 Side Arms puts you in the shoes of two though as nail military men who must take control of two space mechs (Mobilesuits) in order to protect Earth against a full-scale alien invasion by the evil Bozon empire. Side Arms takes a page from Section Z and allows you to use one button to shoot left and one button to shoot right, but also brings a 3rd button into the mix so that you can select your weapon. You will be able to obtain Pow symbols when you defeat certain enemies, and you can shoot them like in 1943 to cycle through all five weapons available, and picking the same item twice will upgrade it and increase its firepower considerably. Depending on what symbol you pick, you can increase your speed, obtain spheres that circle around you and improve your main weapon, a laser, a 3 way shot or even a shotgun, and you must keep in mind that when you die you will lose whatever weapon you are using. There is also one final power-up that is different depending on if you’re playing the game by yourself or if you’re playing with a friend. This is a “fusion” power-up that brings both ships together and allows the new mech to continue using the regular weapons, but it can now also fire in all eight directions around it. In single player, you can sustain two hits before losing this power-up, and a single press of either fire button will activate the regular weapon and the eight-way upgrade while in two player mode, one player controls the new mech and the other player takes care of firing the special eight-way weapon… and a single enemy shot will make the mech split back into two aircrafts. 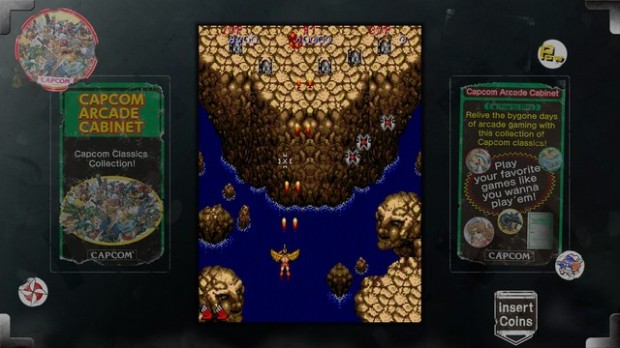 In the distant future of Legendary Wings we find that “Dark”, a genius supercomputer that had helped humanity to evolve and improve, has suddenly decided to help humans no more and is now out for blood. Ares (who some of you might know from God of War and not from history lessons) decides to help one male and one female warrior and gives them the power of flight to fight against Dark and try to save us all. It all sounds great, especially when you see that the game mixes two different gameplay styles by having most of the game be a classic vertical shooter while also mixing things up by introducing side scrolling segments on each level at the middle and the end, but Legendary Wings is clearly the weak game in this group. It is a game with cheap AI that is always trying to trap you between their shots and other enemies and a single hit will kill you in a heartbeat. This wouldn’t be a problem if using a continue would allow you to carry on in the spot where you died (as is the case with 1943), but you are instead sent back to the start of the level. Oh, and to make things worse, any weapon upgrades you obtain by picking up the P (Power-up) circles are instantly erased when you died, bringing you back to life with your regular weapon that is usually not good enough to get you to the end of the level. 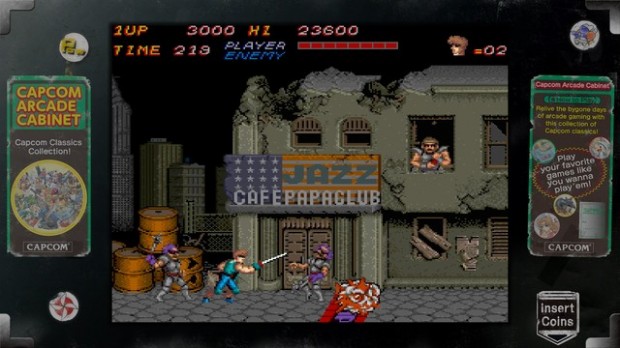 The final game in the pack is Trojan. In this game, you take on an army of enemies that attack you from both sides of the screen while you walk and jump to the end of the stage to fight against the ruthless gang of the evil dictator that has taken control of society after a nuclear war brought destruction to the world. Gameplay is similar to Kung-Fu Master down to the enemies that throw knifes at you, but with an added twist: you have a sword to attack and a shield to defend yourself, and you can’t go all out on the offensive or you’ll quickly be overwhelmed and defeated, which is why finding the rhythm between defending with the shield and attacking with your sword is the only way you’ll make it to the end of the game. Some bosses can knock away your shield and shield after a powerful hit and once this happens you must quickly get a new set before it is too late. Luckily you’re not entirely helpless because your character has been trained in the martial arts and can continue to fight while trying to recover his gear and it is because of this that the game never feels as if it is trying to steal a players quarters (remember, this IS an arcade game).

The 1986 Pack has two great games and one that hasn’t aged as well. As always, each game has a pair of trophies for you to unlock, and you can either pick the pack for $9.99 or get each game separately for $3.99.

This review is based on a PS3 copy of the 1986 Pack for CAPCOM Arcade Cabinet provided by CAPCOM.