Darkstalkers Resurrection updates to two games for the price of one – Night Warriors: Darkstalkers Revenge and Darkstalkers 3. These feature classic gameplay and unique characters as well as a host of new features, including a variety of HD visual modes, online play with 8-player lobbies, YouTube replay sharing, improved challenge modes, dynamic awards, and unlockable extras. Embrace the dark!

CAPCOM has finally decided to give the Darkstalkers a new chance 16 years after the last game for the series was released, and it is doing it right. Darkstalkers: Resurrection is a digital collection of the second and third games in the series and it brings them into the 21st century with HD filters, trophies, youtube integration, online multiplayer and the challenge and award system we have seen before in Street Fighter 3: Third Strike Online Edition, CAPCOM’s other HD re-release. 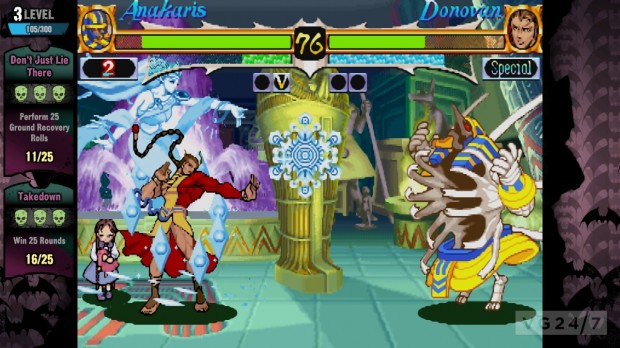 Let’s start with Night Warriors: Dalkstalkers’ Revenge, second game in the series and first one in this collection. Darkstalkers’ Revenge improves on the formula from the first release by fine-tuning the way combos are triggered and by allowing each character to store more than one super attack bar to be ready to strike as they please. On top of that, the two bosses from the first game are now playable characters, and we also got two new characters that join the fight: Hsien-Ko and Donovan Baine. Fights are fast paced, and super attacks are instantly executed without a break or pause from the regular action, and this separated Darkstalkers from the famous Street Fighter series we all know and love. Colorful characters with exaggerated and unique animations round up a great game that is one of the best fighting games of all time. 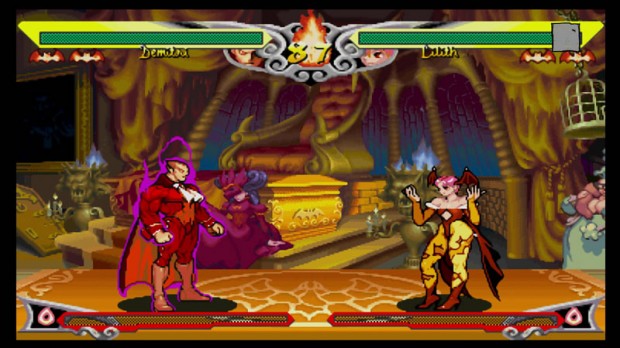 Darkstalkers 3 moves the series forward by bringing in four new characters to the mix (Lilith, Jedah, B. B. Hood and Q-Bee) but also removing Pyron, Donovan and the great Huitzil while also making some changes here and there to change how matches play out. Instead of fights being won on a “per round” basis, each fighter now has a single double bar that is drained from every hit, in a system similar to how The King of Fighter series handles their fights. The third entry also added a “Dark Force” system that is similar to the V-ism combos you can trigger in Street Fighter Alpha 3 and, if you play things right, you can link regular, special and Ex attacks in a short period of time (as long as you have enough special energy stocked) thus destroying your opponent in a few seconds.

GGPO (Good Game Peace Out) is used for the online multiplayer side of things, and this allows you to find online matches that are enjoyable and practically lag free, but you do have to remember that most of those playing online eat, sleep and dream this game so be sure to take things slowly as you dive into the arena with modest expectations for your performance. 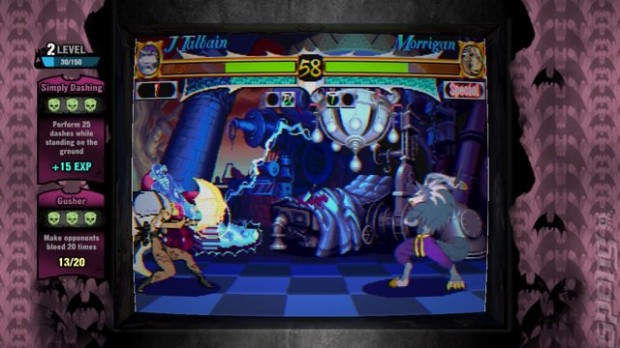 You can either play the game with the original graphics (in all their pixelated glory), add scan lines or a curve to mimic old TV sets, or even make the game widescreen with a smoothing filter on top that makes the graphics shine with an HD sparkle like never before. Playing in regular 4:3 does have its advantage since the left side of the screen will display your progress for each of the individual challenges you are taking care of as you fight in each game, and believe me when I say that both games have a LOT of challenges for you! You can be asked to perform hundreds of projectile attacks, cut your enemies in half, complete dozens of fights or completely regenerate the white meter from your energy bar, to name a few. 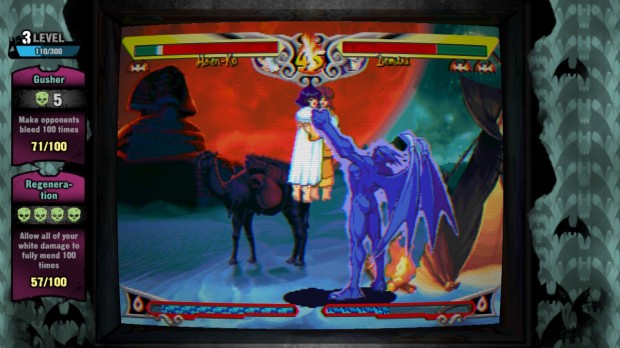 Darkstalkers: Resurrection is a great collection that all fighting game fans should own. You get two terrific games for a low price, online Multiplayer, trophies and extra modes, all digitally available in your HDD. Remember, the more sales we can get for this collection, the better our chances of getting Darkstalkers 4!

[review score=”84″ pros=”Solid ports for the original games.
Great online.” cons=”Darkstalkers 3 is a port of the original and not of the updated version.”]

This review is based on a PS3 copy of Darkstalkers: Resurrection provided by CAPCOM.