Terraria is a side-scrolling, action-adventure sandbox game with an emphasis on crafting and exploration set in vast and vibrant worlds. Terraria has received universal, critical acclaim and 1.6 million â€œTerrariansâ€ have struck out on their own adventures since release.

With a vast array of materials and items to collect, Terraria is far more than a mere block building game, playersâ€™ experience is limited only by their own imaginations, the world is theirs to shape and explore.

You’ve probably heard it before: Terraria is what would happen if Minecraft was a 2D game. Sure, there are some similarities, but Terraria is a different kind of monster… out to devour all of your free time with promises of more and more things to build and monsters to slay the higher (or lower) you go.

The game features a tutorial that you definitely should play before you get into the game itself since it provides you with important information and tips that will allow you to get started right away with the basic actions that make a difference in the world of Terraria. For example, skipping the tutorial might mean you don’t know how to build and protect your home base, and when the night is upon you and you have no place to rest or hide, monster will rush for you without mercy.

You can dig as low as you want, chop down trees or kill monsters… the most classic and basic of actions. But once you do this you will be rewarded with materials, and it is then that the game opens up. You can use the materials to level the terrain so that you have a great spot to create your home base, or you can combine them into new items, which can then be combined with other items to unlock new materials for building and crafting. It is here that the tutorial comes back to haunt you if you skipped it since you wouldn’t know that you need to create a workbench to be able to create new items that are needed to unlock advanced options such as a smelter to melt copper, silver or other metals (and rare metals) you find during your adventure, which allows you to create better weapons an armor.

The more you explore and the lower you go, the higher your chances of meeting extremely powerful monsters that can destroy you in a matter of seconds if you’re not properly prepared. Sure, at first you only run into poor slimes that are no match for your wooden sword, but digging deeper will make you face slimes of other colors of the rainbow, and each new color is harder, better, faster, stronger. And, sometimes, you’ll run into groups of monsters that demand you plan accordingly. A great way to take on several monsters is digging a spot that is only big enough for one of them to make its way towards you so that you can hit them over and over without worrying about being overwhelmed. Sure, it will take you a while, but you either live by this strategy, or die for being reckless.

Digging is a must, but digging in the wrong spot can kill you in the blink of an eye. There are some places that have what at first seems like a decorative boulder in the background and, before you can realize your mistake, you dig over it and are instantly crushed by it. Another problem is water since you’re not half frog and can’t breathe underwater. You can build terrain around underground lakes, or even create a bridge of dirt that goes over the offending liquid, but sometimes you’re quickly digging to escape from monsters that move in the background layer of the world (but who can still hit you when they pass close to you) and you don’t see the big mass of water above, below or in front of you. Once you crack open the wall, water will react and start pouring in and, depending on how much water you’ve unleashed, it could be the end of you. 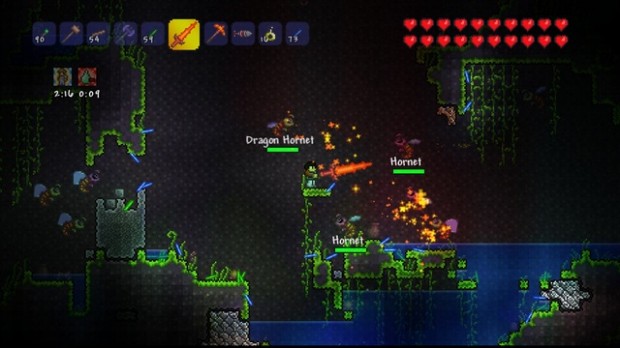 But wait, there is more! You can also make your way high into the sky, and the higher you go, the better things get. You can run into one (or more) floating islands with unique treasures and deadly monsters that protect their territory. Be sure to prepare accordingly or you will be torn to pieces before you can even get to the chest. And if you keep going up, the stars might be within your reach!

All that I’ve mentioned before barely scratches the surface of everything that Terraria has to offer. Since every time you start a new game you get to select the size of the world you’ll play in, and since said world is randomly generated from a huge number of possibilities, you can have a new experience every time you drop back at the beginning. The only problem is the user interface which makes sense since this is a port of a PC game and the PS3 (and Vita) don’t feature a mouse and keyboard to mimic the PC controls. It is not a deal breaker (as there is the option of making your cursor automatically perform an action towards the nearest possible option), but it is something to consider. 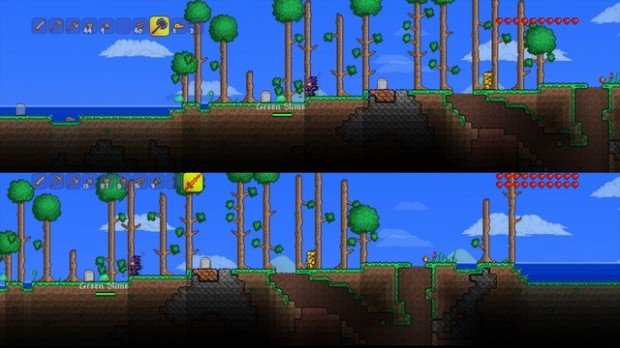 Terraria provides you with an endless adventure that feel fresh and interesting every time you start a new game. The randomly generated content, the variety of items and weapons you can create, and the army of monsters out to get you (aaaaaall day long) will constantly keep you on guard. Before you know it, you will have spent hundreds of hours in this world, and you’ll still keep coming back for more. Add multiplayer for up to 4 people, and you have a great game that you don’t want to miss.