In a world where Evil is taking over and prayers are no longer answered, there is only one type of divine intervention left, and it’s armed to death.
Join the battle of light against darkness. Lead your squad to defeat the Fallen Nun and restore balance to the World in this epic tactical action game.

Nun Attack is a very fun action/RPG/strategy game from Frima Studio, the guys behind (namely) the Zombie Tycoon series. It’s available as a digital download on the PlayStation Store and is also available on iOS and Android platforms.

In Nun Attack, you are controlling a party of nuns armed with an array of guns on their way to defeat the Fallen Nun that is wrecking everything. This game is set in an undead world in which you’ll be fighting skeletons, werewolves, and a few other undead creatures.

This game is totally controlled by touch screen controls, which leads to very intuitive gameplay mechanics. Basically, in each battle fields, the nuns are controlled by “sliding” them towards the destination or an enemy and once an enemy is targeted, they’ll attack it automatically. That is all(!). The game difficulty is well balanced in the normal sections, but I noticed a pretty steep difficulty curve in the boss battles.

Each time an enemy is killed in battle, it’ll drop money that can be used to upgrade your arsenal. There is a pretty cool array of guns available as each nun has have five different weapons, and each one can be upgraded a few times. 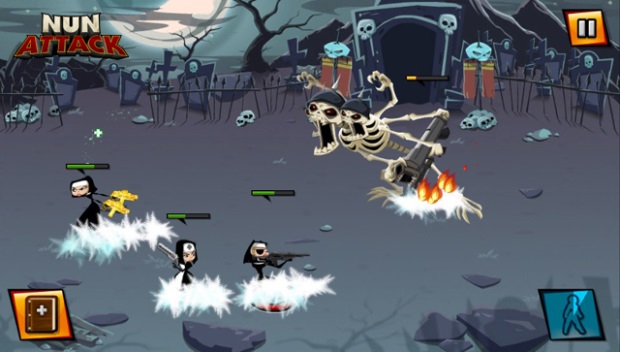 When each battle is completed, experience points and levels for the participating nuns are awarded, pretty much like in a typical RPG. Another pretty cool thing about this game is that it can be played in very short gaming sessions, ranging from 5 to 10 minutes.

The graphics in this game are very sharp, and the characters and monsters are perfectly animated. The soundtrack is reminiscent of an undead world, which fits well in the context.

With a price tag of only 2.99$ on the PlayStation Store, Nun Attack is a no-brainer. I’ve had (and I’m still having) a lot of fun with this game, and I would recommend it to every PS Vita owners looking for a fun experience between bigger gaming sessions!

This review is based off of a retail copy of the game purchased by the reviewer.