2032 ADâ€”Earth has been ruthlessly assaulted by extraterrestrials, and nineteen years of nonstop battle now threatens the very existence of humanity. The last hope for human survival is BRS, a heroine created solely to save planet Earth; she is the ultimate battle android. But when she is awakened to end the battle once and for all, there are only twelve human beings left on Earthâ€¦

Key features:
* The World: Explore ghostly city ruins, bizarre alien structures, and more as you travel through illustrator Hukeâ€™s vision of a devastated future Earth!
* The Enemy: Engage in lightning-fast battles where your choices and reflexes are the only thing standing between you and total annihilation!
* The Girl: Level up BRS to equip her with a bevy of attacks and skills to make full use of her superhuman abilities and gigantic cyber-cannon!
* The Last Hope: Complete a variety of missions for the last remaining humans to unlock new guns, costumes, challenges, and more!

Black Rock Shooter started as an interesting concept drawing by Ryohei “Huke” Fuke of a girl with black hear and a blue eye that shines with fire. It was originally released in Japan in August 2011, and it is finally available in Europe and the US thanks to NIS America. The game, as has been the case with every piece of content based on Black Rock Shooter, is set in a different universe and only shares the titular character (Black Rock Shooter) as its one constant. This means there is a Black Rock Shooter song, an OVA, a short anime, a manga, a browser-based game, and the PSP release for this review. Funny how things work, huh?

In BRS: The Game you control Black Rock Shooter, a super-weapon that has been awakened by the last twelve surviving humans in the world as a “last hope” effort to try and save them from the aliens that are one step away from destroying the entire human race. Nothing like a cheery “doomsday” scenario to start the day, right? Since BRS has been in a deep sleep, she’s forgotten most of her skills and special attacks, and you must recover them by leveling up and completing each level. 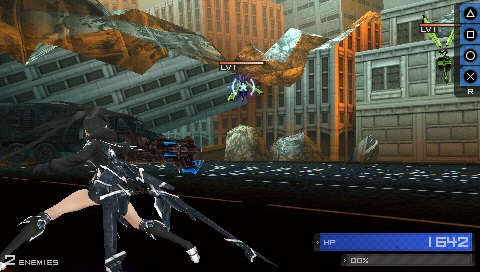 In essence, Black Rock Shooter: The Game is an RPG. The game is divided into several scenarios, and you can move around freely to explore each setting, but as soon as you come into contact with an enemy the game switches to a fight. BRS can shoot, dodge or defend against enemies and their attack, but you have to be careful about how you do things. Blocking only reduces the amount of damage you receive and dodging must me timed properly to avoid not only the attack of one enemy, but of those about to attack you from both land and sky. On top of that, every time you attack or that you dodge the heat bar rises, and if you’re not careful, it can overheat BRS, and you won’t be able to move at all for a short time which could quickly end up with our heroine lying on the ground in defeat. 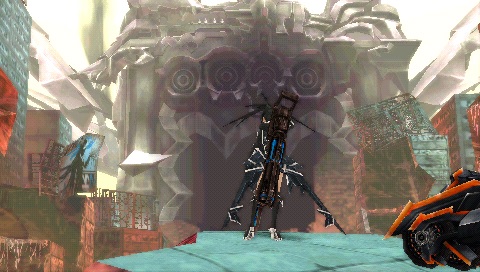 When you eventually unlock special attacks and skills, the game grows even bigger on strategy. Do you use your super shot right at the start to get rid of one enemy, or wait a bit for them to get closer so that you can hit them all at once? Do you activate your regen skill even though you’re at full health to focus on attacking, or do you wait after being damaged to use it? Since special attacks and skills have a cool-down period, you must plan accordingly and mix and match the 4 slots available for them. Regular battles don’t put much stress on this, but during boss battles you better know what you’re doing because bosses can also use special skills and attacks to eradicate you. 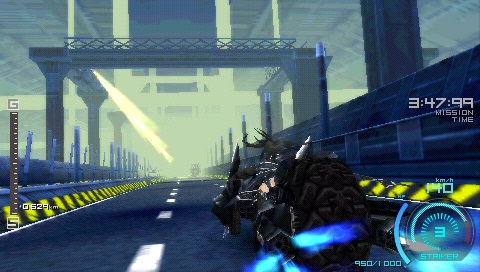 The game is split into small levels that take you between 20-40 minutes to complete, and there are several sub-missions to complete while you go for the main objective. Completing said sub-missions rewards you with special skills and attacks that make things easier. Most of these side-missions ask you to destroy X amount of enemies of Y type, and since you should always be sure to obtain as much experience as possible, it’s definitely a win-win for you and BRS. 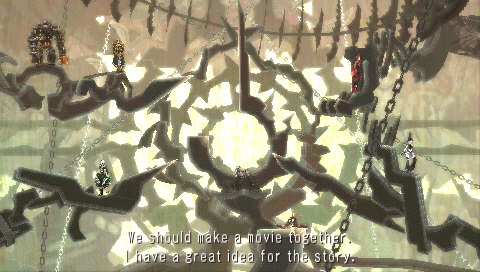 Black Rock Shooter: The Game is a solid PSP game that will provide you with between 12 and 15 hours of gaming before it is all over. You can play it either on PSP or on Vita (which is always nice) for a great low price and the Japanese voice acting ads a nice touch to the story and the interaction of this last group of humans. Will you take charge against the invaders and secure a new dawn for all of humanity?

[review score=”80″ pros=”Fun and different RPG.
Great price for the content provided.” cons=”As is the case for all RPG, some grinding is required.”]

This review is based on a PSP copy of Black Rock Shooter: The Game provided by NIS America.