Dungeons & Dragons: Chronicles of Mystara combines two timeless D&D arcade classics -Tower of Doom and Shadow over Mystara- into one definitive package. Battle through a rich fantasy universe with a host of new features, including HD visuals, drop-in/drop-out 4 player online co-op, customizable House Rules, leaderboards, and a trove of extras.

â€¢ Seamless drop-in/drop-out online gameplay powered by community tried & trusted GGPO technology
â€¢ Create your own game set up with House Rules such as:
o Unbreakable â€“ No need to worry about equipable items as they now have infinite durability.
o Enemy Rush â€“Start with only 30 seconds on the clock and keep it going by defeating enemies
o Make it Rain â€“Enemies and chests drop extra gold
â€¢ A series of diverse and dynamic inâ€“game challenges which deliver level ups & Vault Points
â€¢ Use Vault Points to purchase a treasure trove of unlockables and gameplay loot
â€¢ The Character Visualizer tracks which characters players and their friends use the most
â€¢ Leaderboards and gameplay related stats

Remember Arcades? Those wonderful places filled with so many games to enjoy in exchange for your quarters (or tokens)? No? Well, they used to be awesome and featured several entries in my favorite genre: beat-em-ups. Teenage Mutant Ninja Turtles, X-Men, Aliens Vs. Predator and The Simpsons were (and still are) some of the best examples of this type of game and, in 1993, CAPCOM used the Dungeons & Dragons license to release Dungeons & Dragons: Tower of Doom to bring something new to a classic genre.

Dungeons & Dragons: Tower of Doom features a cast of four classical heroes from which the player can choose to embark on an adventure:

– Fighter: Very handy with the blade and a healthy adventurer with a lot of energy.

– Elf: The magic user of the bunch. Nimble and quick with her short blade but skilled with her spells.

– Dwarf: The strongest of all four who is fast with his ax but who has a very short reach.

– Cleric: A man of the cloth who uses a mace and a shield to fight while using a set of spells that favor protection and healing. 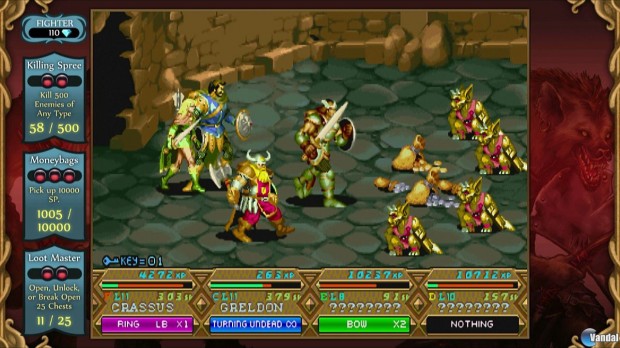 As is the case with most adventure games, this group of warriors is tasked with defeating an evil demon that is out to conquer the realm… or something like that. You will face hordes of monsters that will stop at nothing to destroy you, and you must learn their attack patterns and abilities if you are to survive.

Controls in Tower of Doom are easy to use since you have one button to attack, one button to jump, one button to circle through your inventory, and one final button to activate the weapon, spell, accessory or skill you’ve selected. Magic users will find scrolls for new spells or to refill their current selection, and everyone can pick up rings that feature a specific spell and that are destroyed after being used. 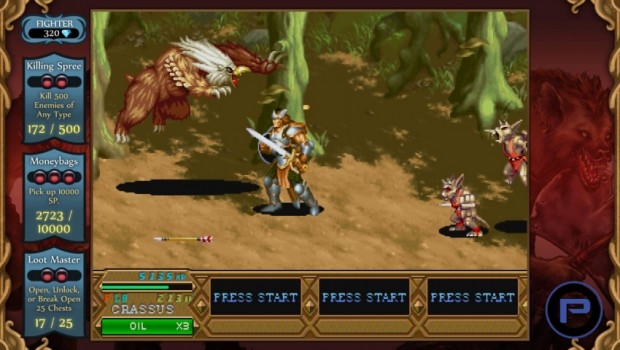 On top of this, each character can obtain experience points by defeating enemies and picking up items dropped by enemies or found in treasure chests, and quickly finishing a level without dying will reward you with a huge experience boost that will allow you to level-up your character. When you level-up, your hit points are increased, and you become more skillful which in turn allows a character to improve their skills and spells. For example, the Elf might start with a couple of uses of her Magic Missile spell which at first shoots out two projectiles but, as she gains experience and levels-up, she will have more uses of the Magic Missile spell at the start of each level AND the spell will shoot out an extra projectile, and then another up to 4 projectiles per spell. This can make a huge difference in the heat of battle and is a nice bonus

Shadow over Mystara improves on the formula by adding two new characters to the mix, better graphics, an even deeper inventory system AND the possibility for two players to select the same character class thanks to each adventurer having two different sprites! This means you could have two elfs and two clerics on screen, or a mix-and-match scenario for every possible gaming style. As for the two new characters, lets take a short look at them:

– Thief: This new adventurer is fast with her blade… and her fingers! Going through enemies will sometimes make the Thief steal an item here and there, which can be of great help when you’re surrounded and that Large Bottle of Burning Oil you just picked can quickly defeat a horde. The Thief can also double jump and run around each level to avoid attacks, and it has an unlimited stock of rocks to sling at all enemies.

– Magic-User: Is the Elf too combat-heavy for your taste? Then pick the Magic-User and his huge selection of spells. He also gets a staff to hit enemies with, but it is weaker than the attack of all other adventurers, and he hast the lowest health total in the group. To offset this, he has an useful “teleport” ability that allows him to dodge attacks if timed right, as well a special spell that makes him invincible for a short period of time. 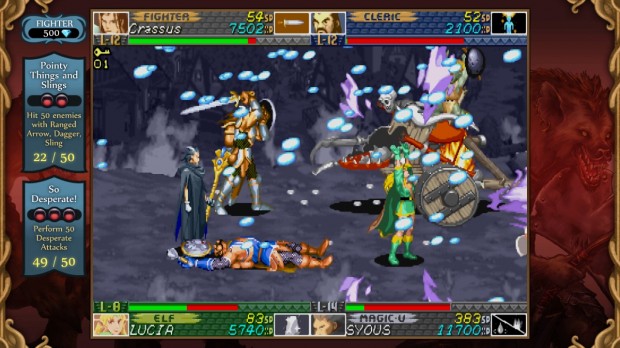 Shadow over Mystara allows the Elf, Magic-User and Cleric to have an extra pair of skills/items slot which you can access by pressing the jump button after bringing up the wheel, and this accommodates two sets of spells and a set of items/weapons. On top of that, each character has a full inventory for armor and accessories (which you can bring up by pressing the Select button on the PS3 controller) which improve your stats and defense ratings. All characters start with an armor (and some even a shield), and you can get a hat/helmet, a ring, boots or gauntlets for each character as you go out on your quest. You DO have to be careful because these special accessories tend to break after receiving 4-5 hits from enemies, so be aware that “hit, dodge and kill” is still the best strategy.

Also, every character (except for the Magic-User) has a new Desperation Attack activated by hitting the jump and attack buttons at the same time (a must-have in a beat-em-up style game) which damages all enemies around in a short-range while, and all characters (again, except the Magic-User) now have a “Down-Up” special attack, as well as a dash attack. For example, the Elf’s “Down-Up” Special Attack makes her dash a bit with her blade and she later rises while slashing in a circular motion. This is great for juggling enemies, but it does wonders against bigger bosses with a bigger hit box. 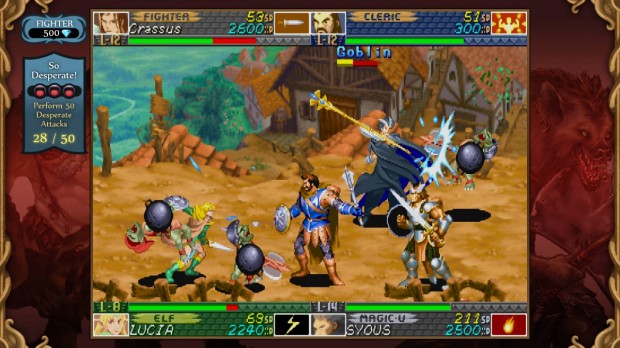 This collection marks the first time that Tower of Doom and Shadow of Mystara have been made available for home consoles in the US since the only previous release was a Japan-only collection for the SEGA Saturn. We’re definitely getting the best collection with faithful arcade ports because the Saturn ports only allowed two players to participate. Dungeons & Dragons: Chronicles of Mystara features full four-player support either offline or online and it is drop-in/drop-out, the best kind!

The only problem I have with the game is that it doesn’t feature save states or a proper save system, period. Sure, once you complete a stage it is unlocked and available for you to play at any time, but your character is brought back to the default stats and equipment you would theoretically have when reaching said level. I found this the hard way after I had unlocked a unique sword in Shadows of Mystara and had to quit the game for a couple of hours, only to come back and find that it was lost, and I would have to obtain it once again if I wanted to carry on. Also, lets not forget these are ports of Arcade games and, therefore, there are several cheap hits from enemies and bosses that you’ll just have to suffer through. It’s how we did it back in the day, and we liked it.

Dungeons & Dragons: Chronicles of Mystara is worth every penny. I spent 10 times as much back in the day while trying to finish each game, and this collection gives you “as good as it gets” ports of two fantastic games at a low price. In-game Challenges, and the Trophies that some of the unlock, as well as the multiple branching paths and extra levels to unlock will keep you coming back for more. Add on top the drop-in/drop-out offline AND online multiplayer, and you’ll be enjoying this game for months.

This review is based on a PS3 copy of Dungeons & Dragons: Chronicles of Mystara provided by CAPCOM.