Unhappily ever after. Thatâ€™s how it starts. The Orb resurfaces and the classic characters return. Kobbler with his mania, Princess with her endless boredom. Itâ€™s only a matter of time before Bob, our hero, shows up to put order back to madness. Three powers struggle for victory and the fate of Cloudberry Kingdom hangs in the balance. What will become of the retired hero, Bob? Will saving Princess one last time win her love? Could true love ever stop Kobbler and the power of the Orb? No, probably not. But hey, itâ€™s worth a shot.

* A platformer designed with a fully random level generator. Every level is brand new and never seen before. The difficulty level can match any need, from the casual to the hardcore.

* Up to four players with local multi-player and Co-op

Cloudberry Kingdom provides you with an Arcade Mode, a Story Mode, and a Free Play Mode, and it is now my responsibility to enlighten you on what each mode has to offer.

In Arcade mode, you can find four sub-modes to play, but only one is unlocked from the start. To open up the other three, you need to increase your player level (a number based on how many levels you’ve already managed to complete). Here are the four sub-modes so that you know what you’re getting into.

– Escalation: In this one you’re given 15 lives to go as far as possible. Level environments are randomly changed every so often to keep things fresh, and you are rewarded with extra lives by collecting coins on each level (there is a handy counter on the top right to let you know how many are needed for the next one). By collecting all coins in a level you will obtain a bump in the score multiplier and, as long as you don’ die, you will be able to keep it AND bump it up some more. On top of that, by completing more and more levels on a single run, the base score multiplier will also be increased, thus allowing you to go from, say, a x6 multiplier to a x12 multiplier in a few minutes as long as you’re good enough to stay alive and in one piece.

– Time Crisis : You are given 15 seconds to complete as many levels as possible, and collecting crystals will add more time to the countdown. Since each level is only 3-5 seconds long at most, you will constantly be on the move trying to make it to the exit on time. When time is about to run out, the screen will flash red to try and distract you, and sometimes it’s ploy works. If you end up with less than 2 seconds left on the clock when you enter the exit door, the countdown will go up to a solid 2 seconds which gives you a shot at grabbing all crystals in the level to bump up the time you have left.

– Hero Rush: In this one, you will be given one random hero per level, but you will be able to tell which hero is next by looking at the exit door. Other than that, it is business as usual. Things are harder because you need to constantly readjust your strategy between playing with Plain Bob, fat Bob, Rocket bob, Tiny Bob, Spaceship bob, etc. Basically, since you’re playing with each one for a handful of seconds, you can never get “in the zone” to complete as many levels as you usually would on the other sub-modes. Oh, and the countdown clock from Time Crisis is back which makes everything even more hectic.

– Hybrid Rush: Things REALLY get interesting for this mode! Several heroes are mashed together (hence the hybrid part of the title) to give you something new to work with. There is nothing weirder than having Bob strapped to a wheel with wings… well, except for Bob in a Box with a Rocket, or Bob Riding a Bouncing Horse that gets bigger and smaller as you move. Crazy, huh? That’s why this is the last sub-mode you can unlock since you need to get the hang of things before you’re thrown into this gameplay circus. 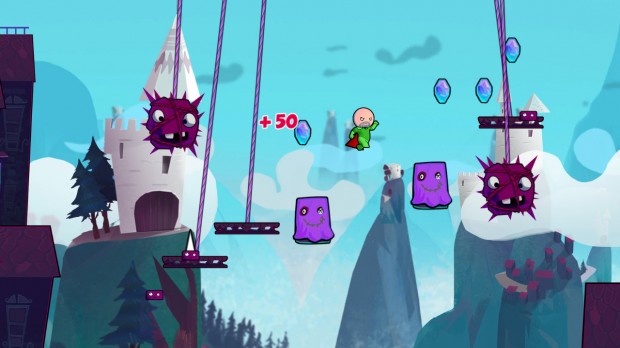 As for story mode? The intro took care of explaining it, but here it goes again: Our hero, Bob (who is voiced by Kevin Sorbo) is out to save the princess and the world from the mad King Kobbler, and his adventure will take him on a journey that spans 240 levels (for the main story) and an extra 40 levels that are so crazy, it hurts. Story Mode is split into 7 chapters (6 mandatory and one optional) of 40 levels each, and it will probably take you 10 minutes to complete Chapter 1 since it works as an introduction to the game. The time it takes you to complete the other Chapters will depend on how good you are because the difficulty jump from, say, Chapter 2 to what you’ll face in Chapter 5 will almost make you think you’re playing a different game. 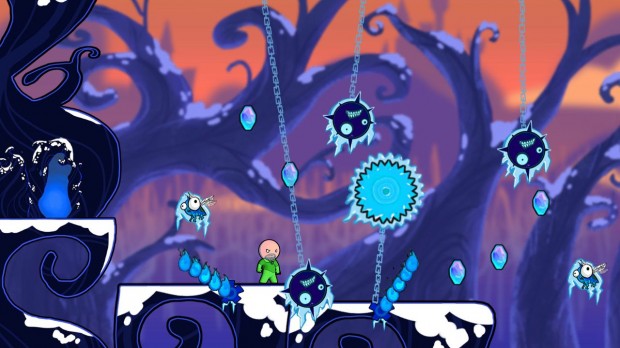 Free Play, as the name implies, lets you play with all the elements that the game ha to offer. You can create a level from scratch and then save your creation if you’re satisfied. You can select the size of the level, if it will have checkpoints, if it’s a regular level or a level with a wall of doom that moves fast and wants to kill you, as well as picking the difficulty of jumps, the number of platforms available, the environment you’ll be using for all assets, the type of enemies and hazards you’ll avoid, as well as how many of each will populate the level. If it’s in the game, you can use it to create a walk in the park or a frustrating slice of hell… and I love it. All of this freedom means that anyone can enjoy the game, even if the package, as a whole, does tend to favor those with a lot of experience with platforming games. 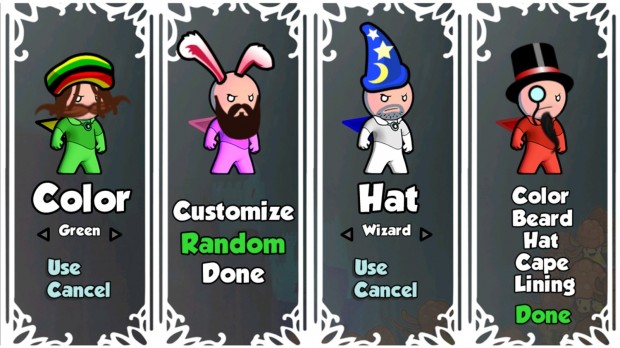 Did I mention you can do all of the above while enjoying multiplayer with up to four people at once on screen? I didn’t? Well, I guess I just did! If you thought that getting through a level was hard by yourself, wait until there are 3 other people trying to get to the exit before you! There is even a bungee option that has all four players tied together, demanding almost perfect synchrony from everyone involved. 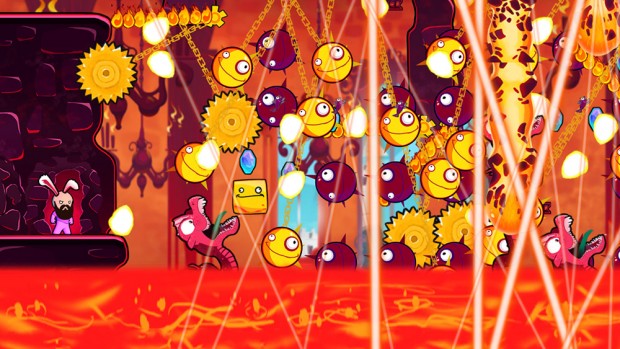 Cloudberry Kingdom is a great indie game that was picked up by Ubisoft as the publisher, and they didn’t change a single thing for the game. It is just as hard and crazy as when it was shown as a prototype on its Kickstarter campaign, which made me very happy. The amount of content (technically infinite), the tight platforming controls (if you die, it’s your fault, not the game) and vivid art assets make this a game worthy of your time and money.

Interesting Cutscenes.” cons=”Game gets so hard in Chapter 7, your hand will die.”]