DuckTales: Remastered is a hand-crafted, beautiful reimagining of one of the most cherished 8-bit titles of all time. Go back to one of the golden ages of gaming, but now refined with a level of detail that will please the most hardened devoted Disney or retro Capcom fan, alike. Featuring hand-drawn animated sprites, authentic Disney character voices talent and richly painted level backgrounds from the classic cartoon TV series, Scrooge McDuck and family come to life like never before. The gameplay retains the authenticity of its 8-bit predecessor, simple and fun, with slight modifications to improve gameplay flow and design. Embark on an authentic DuckTales adventure, as Scrooge McDuck and his three nephews Huey, Dewey and Louie travel to exotic locations throughout the world in their quest to retrieve the five Legendary Treasures.

Before diving into the review, lets get things started by watching this video to get into the right mood.

Ducktales: Remastered is CAPCOM shot at bringing their classic NES release back into the spotlight under a new coat of paint and several extras that update this 24 year old release for the 21st century. They hired 2D master WayForward to work on this game (something for which I’m thankful) and decided to bring the game to market as a digital-only release (and no, the PS3 retail version does not count. While the pin is nice, it is available in limited quantities, it is only a box with the pin and a PSN download code for the game) which means that some corners had to be cut in order to keep this at a $14.99 ($19.99 for the PS3 retail version) game. Still, while some things were not feasible, the game features several cut -scenes that provide us with a story as to why Scrooge is going around the world to find the 5 treasures you will seek during your quest AND they feature full voice acting by the original cast from the cartoon! 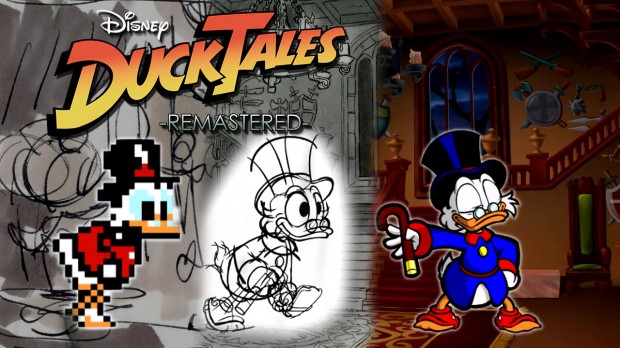 Lets get the bad out of the way: what “corners” had to be cut? Well, unlike the A Boy and his Blob remake, truly WayForward’s best masterpiece, not everything in Ducktales: Remastered is hand drawn. Seeing all the character carefully animated and then see each level as a mix of a painted background and cell-shaded polygons did not sit well with me at first… but this was only a problem with the Amazons level. The other 5 levels (4 from the original game, plus a pair of new levels exclusive to this release) do a better job of mixing both art styles into something that works. Would I have loved it if everything was hand-drawn? Sure, but that would have made this a $50 retail release, which wouldn’t sit right with a lot of people. 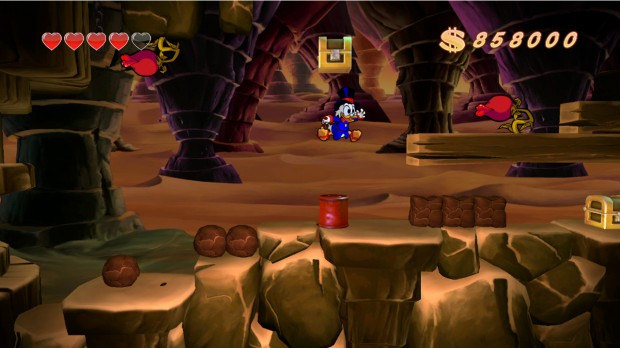 You see, at it’s core Ducktales: Remastered is still a short game, just like the NES original. Each level will take Ducktales veterans about 15-20 minutes to complete if they sit down and relax while enjoying the cut-scenes for each level, and skipping the cutscenes (this can be done for every cut-scene from the pause menu) trims that down by about 5 minutes per level. With 7 levels total, that puts a single run at roughly at 1 to 2.5 hours at most, but you can add an extra hour or two for those that don’t know these games like the back of their hands (me, I DO know this game inside and out since I’ve probably finished Ducktales on the NES about 100 times since I bought it back in the day). Each level also has some extra areas to mix things up a bit. Nothing major as to alter the flow of the game, but definitely something new to look for here and there. Can you spot all differences? 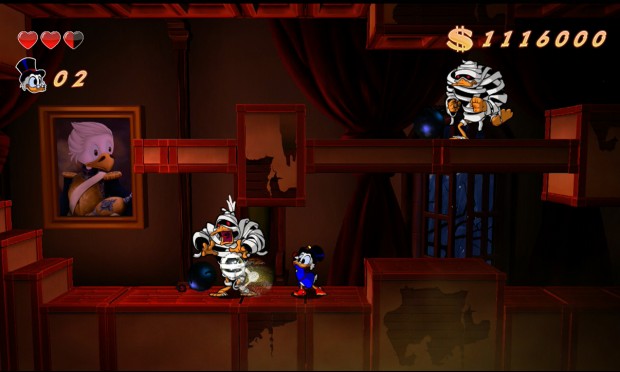 To provide gamers with more bang for their back, Ducktales: Remastered features 4 difficulty settings so that anyone can enjoy the game. On Easy, the game is extremely easy, and any gamer that has ever played a platformer will easily make it to the end, and each of the original levels features an extra heart that can be picked to have 8 hit points total per life. When you go to the Normal difficulty you’re faced with a slight bump up in the difficulty, but nothing major. On Hard, the game is just as I remember it from playing it on the NES with several situations with tricky enemy placement and a harder quest overall, and you will only find an extra heart on two of the 5 main levels (to compensate for this, the other 3 feature a treasure that rewards you with a cool extra million). And then, we have the Extreme difficulty setting. How Extreme is Extreme? You’ve got to complete the game in a single run (but will still be able to grab the two extra hearts), and once your lives run out you have to go and do it all over again right from the start. Extreme is unlocked after finishing the game on Hard, and it is only for experts that KNOW this game and can maximize their visit to each level by first securing the extra hearts and stocking on extra lives. 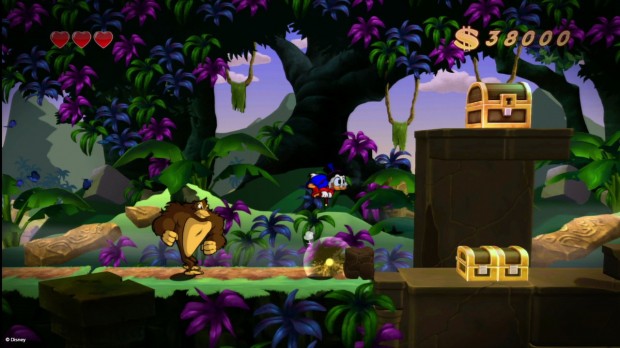 Another bonus is a long selection of sketches, paintings, drawings and “this is how this character looked in the original, and here it is in the new version” selections that can be bought with the money you earn in your journey. A single run won’t be enough to unlock everything so you will need to replay some of the levels after you’ve completed the game. I simply love it when this is added to games since being able to see the process from start to finish is something I look forward from all games. 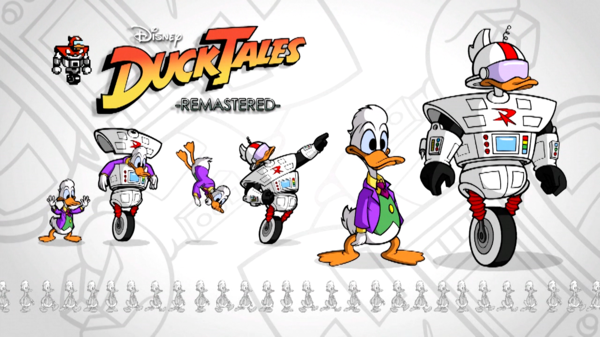 Jake “Virt” Kaufman did some great work on the original music for the game while being faithful to the source material, and I look forward to being able to buy the soundtrack for Ducktales: Remastered at some point. Unlike Virt’s other work with WayForward, this one is a little trickier legal-wise and it probably will take a while for all the contracts to be signed for a release to happen (if at all).

Ducktales: Remastered is a carefully crafted remake that goes back to the source and updates it for both new audiences and fans of the original. The beautifully animated characters, the detailed painted backgrounds, the new content and changes made to the game, as well as all the extras you can unlock, make this a well-rounded package. The game itself might be short, but it is the kind of game you can go back to and replay over and over again while still having fun.

Having the original voice actors contribute to the game.” cons=”It is NES Hard, so new players might want to start on Easy or Normal.”]

This review is based on a PS3 copy of Ducktales: Remastered provided by CAPCOM