Introducing Disney INFINITY, a unique toy based video game where a spark of imagination unlocks the freedom to play with some of your favorite Disney and Disney/Pixar characters in their respective worlds like never before. Game features include extreme game customization and character mingling in ‘Toy Box’ mode, the inclusion of everything needed for initial play including the base peripheral and three initial character figures, multiple virtual play areas, additional collectable characters/figures, single-player and multiplayer options, and unlockable online and mobile content.

Disney Infinity is the latest game from Disney Interactive Studios and Avalanche Software, and one of the most expensive games ever made with a development cost of over $100 Million (!!). In this game, players take physical toys and place them on a portal to have them come to life in the game.

In Disney Infinity, players are invited to play a few different campaigns in the starter pack, which has the following Play Sets: Monsters University, Pirates of the Caribbean and The Incredibles. 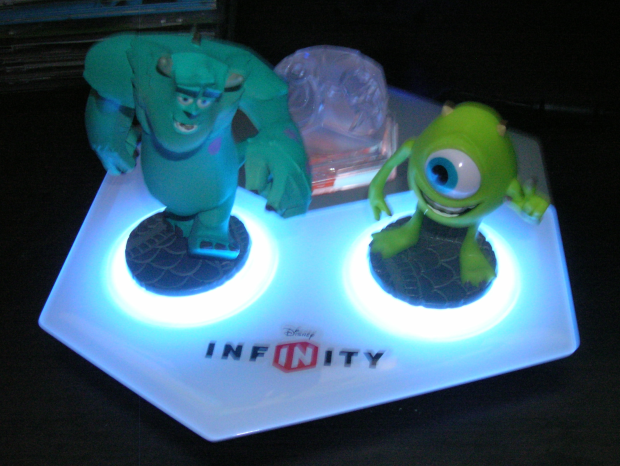 The first campaign I played was Monsters University, and after 15 minutes of play, my kids started asking if they could go play Skylanders!. Since they were lost in the quest-based setting of the game, I took one of the controllers and helped them. I found the Monsters University campaign (based on the movie) to be a little boring because there are no monsters and only fetch quests.

Finally, The Incredibles campaign is mostly about rescuing citizens in order to defeat Syndrome, and you’ll be building your secret hideout while defeating hordes of robots and capturing a few criminals. That one was okay and still funnier than the Monsters University campaign.

Unlike Skylanders, where you follow a linear path in the story mode until the end of the level, in Disney Infinity each world is open (pretty much similar to InFamous’ open-world setting), and the quests will drive you through the worlds. Each individual Play Set campaign is roughly 6 hours long.

There are also no real distinction in-game between “main” and “secondary” quests, so the story might seem slow when doing “secondary” quests. I also REALLY got lost in all the worlds I played because the maps are quite big in size and there isn’t any map to help. This is my biggest gripe with the game because I got lost often enough to shelve the game for 2 days when I didn’t find where I was supposed to go. There is a green pointer that helps but it only points in the general direction of the objective without telling you how to reach it, and it often disappears when a quest is completed because it does not automatically default back to the main objective. 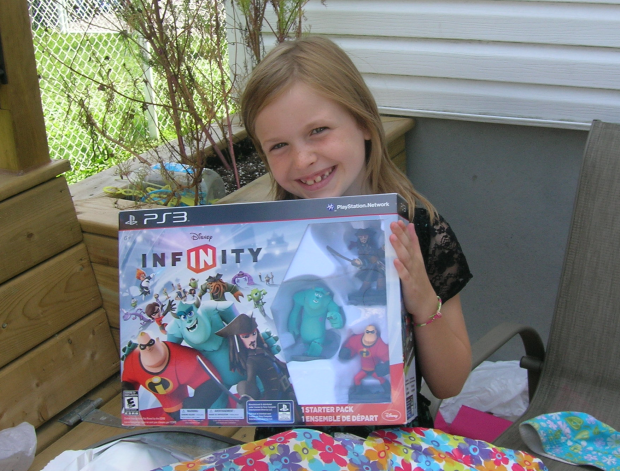 When I gave the starter pack to my oldest daughter!

Outside the campaigns, there is also a big emphasis on the “Toy Box” mode, which is a sandbox in which players can create and share their own games within the Disney Infinity game engine, like in Little Big Planet.

The local multiplayer campaign mode is one of the things you should be aware before playing this game: while you get a few figurines in the startup pack, you’re not allowed to play in local multiplayer with characters from a different universe. That means you HAVE to buy a second figurine to play the campaigns with your kids or your friends (the Toy Box mode does not have this restriction). For the record, I purchased a three pack of figurine for $30 – plus the startup pack at $75 – only to play with my family (who would play a Disney game alone?). Combine those prices, and I get the price of two regular games only for this game. And all the characters are already included on the disc: the physical figurine is only what unlocks the content.

As of now, a Cars campaign can also be bought separately for $35, as well as a campaign for The Lone Ranger for the same price. Each Campaign set comes with two figurines from said universe along with a figurine that unlocks the Play Set.

Also, a few new campaigns have been announced but have yet to be released:

Disney Infinity is an okay game, but I only found the Pirates of the Caribbean to be great and worth the price of admission, because I think that this game is too expensive for what it offers. The few incoming packs seem like a good reason to buy the game early, but you could as well wait for a price drop and enjoy those packs later.

If you liked Little Big Planet and are feeling creative, the Toy Box Mode will make you very happy, and there are also a few trophies related to sharing your worlds with other players. The game is great when played with your family but like I said, be aware that a second figurine will be required for each Play Set.

This review is based off of a retail copy purchased by the reviewer.