The Netherworld â€“ a place where might makes right and todayâ€™s friends are tomorrowâ€™s enemies. After a long journey with many ups and downs, Laharl finally finds himself as a full-fledged Overlord. However, the other denizens of the Netherworld do not see him as such, so he sets out on a journey with his loyal(!?) vassals to receive the respect he deserves. Along the way, Laharl will meet a girl who claims to be his sister, demons with bigger than usual chips on their shoulders, and find out that even his own body holds a few surprises for himâ€¦

Disgaea D2: A Brighter Darkness is the newest Strategy RPG (SRPG) from NIS America. This game is a direct sequel to 2003â€™s Disgaea: Hour of Darkness (PS2) and follows Laharl on his quest to become the Netherworld Overload along with his vassal Etna and the fallen angel Flonne.

Dood! Disgaea D2 (also known as Disgaea Dimension 2 in its original Japanese version) is an over-the-top Strategy RPG, in which pretty awesome and surprising attacks can happen. Expect to have a very fun time while traveling in the Netherworld with the trio!

The game begins with a cut-scene presenting the main characters, you know, just in case you’re not familiar with them. Laharl is the self-proclaimed Netherworld Overlord, and heâ€™s accompanied by his vassal Etna (a vassal is a kind of bodyguard), and the Fallen angel Flonne.

The first few fights in the game are meant to be a tutorial about the game system while also explaining some of the new features. Right after the tutorial, Laharl is confronted with someone who is also proclaiming herself to be the Netherworld Overlord; thus Laharl and his friends will fight in order to determine who really is the supreme ruler of the Netherworld . 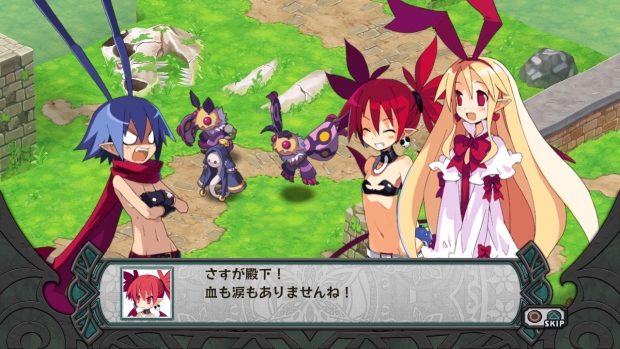 Gameplay – outside the battles

When you’re not fighting Netherworld demons, you’re spending time in Laharl’s castle. The castle is meant to be the hub in which you’ll be shopping and setting-up your party and it offers several things to do. For instance, you can buy items and equipment for your party members, save your game (very important!) and adjust your party settings with the Dark Assembly and the Cheat Shop.

In the Dark Assembly, you can create new characters that will fight in your party. Apart from the main characters (remember, they’re Laharl, Etna and Flonne), you’ll first be accompanied by Prinnies (Dood!). These creatures are Disgaea’s emblematic penguin-like reincarnation of sinners and not only do they know how to fight, they can also be thrown to enemies to explode and do a lot of damage. After playing a little while, you’ll be able to create more advanced characters and creatures that will fight for you until the end. 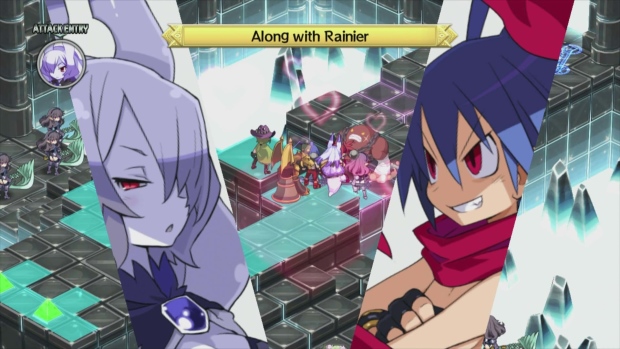 The Cheat Shop is located outside the Castle Walls (which can only be found if you rotate the camera) and is a place in which you can change the game balance to your advantage. For example, you can decide to receive only 80% of the money from each fight in order to increase the amount of experience received. At the beginning, you can only change it from +80% to +110% for each stat, but as you progress you can introduce some crazy changes (and up to +1000% in post-game!).

The game has an auto-saving feature (which can be toggled off in the menu), but although this sounds great at first, it’s sadly a little against the player. For instance, each time you lose a battle, you get back to the castle with all the experience you got in the battle, and then the game auto-saves. Since I got wiped out, healing everyone costs a lot, and I often thought that the experience I got in combat was not a good trade-off for having to spend so much money, so I often reloaded my backup save game.

Disgaea D2 is a relatively typical Strategy RPG. Each combat has two phases: moving and attacking. The liberty in this game is pretty impressive, and you can deliver devastating attacks with interesting results if you plan your moves correctly. In each of the battle rounds, you always fight the monsters before they can even move, so this gives you a nice head-start on the battlefield. 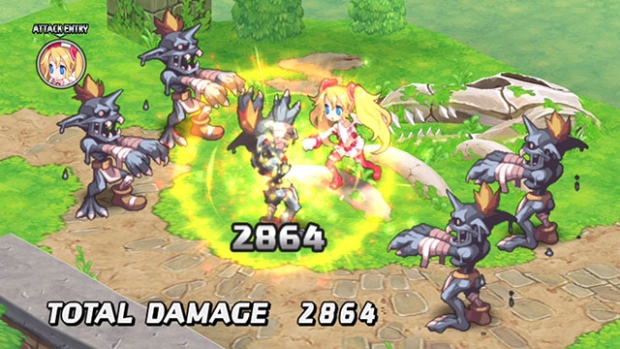 For instance, if two characters are side-by-side, they have a chance to do a combo attack, which does a lot more damage than if the character was attacking alone. You can also stack (yes, stack!) people on top of each other to do a tower attack, in which each member will hit the enemy, but the towers can also be used to throw some characters farther in the map. Mastering this is key for destroying strong enemies before they can even reach the weakest characters in your party.

And now, about the weakest characters… once a new character joins your party (some of them from the story, but most of them will be created in the Dark Assembly), they usually come at level 1, which means they’re pretty much useless before being leveled a lot (landing hits with 0 damage, and getting insta-killed almost every time). Also, since experience is awarded when damaging or defeating enemies, strategy is required to level-up new members in your party.

Finally, newcomers to the Disgaea series will probably be surprised by the steep difficulty. The first few hours are the tutorial of the game, so this part is quite easy. As soon as those first battles are completed, the difficulty gets high VERY quickly, and I did have to grind experience in some earlier levels (a previous zone is always available and can be fought again) to help me advance. This game is not a mainstream RPG so casual players will probably want to stay away from it. 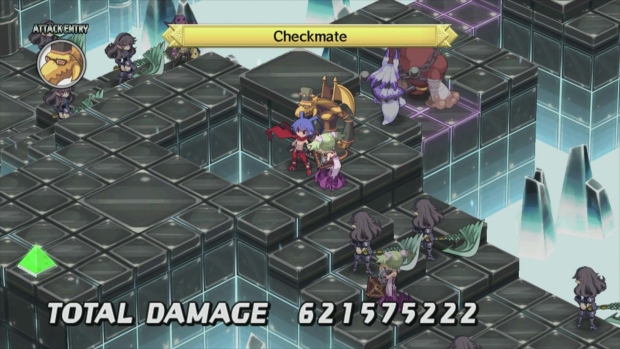 Disgaea D2: A Brighter Darkness is an over-the-top Strategy-RPG in which very creative and surprising attacks can be executed. Learning the game mechanics and playing it is very fun! The game is hard so it will please hardcore gamers but, like I said in my review, casual gamers might be surprised by its difficulty.

If you’re a Disgaea fan, then buying D2 is a no-brainer. If you’re new to the series, this is a nice entry point since, even though it’s a hard game, it’s easier than some of the other games in the franchise.

You can purchase Disgaea D2: A Brighter Darkness from Amazon.com here or on the PSN.

This review is based on a PS3 copy provided by NIS America.

[Girlfriend Review] The Last of Us