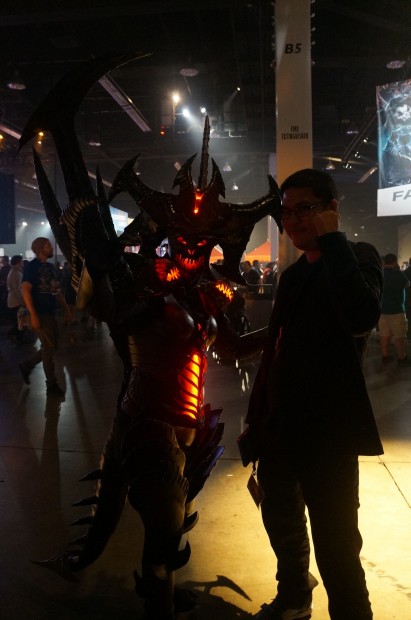 Blizzard Entertainment’s wildly popular Blizzcon wrapped last weekend. During the con, attendees had a chance to play upcoming games, as well as the Diablo 3 expansion Reaper of Souls on the PlayStation 4 system. Representatives from Sony were on hand to showcase the upcoming port of Diablo 3 in a timed demo. The demo featured the new Crusader class available for the first time for people to test out and play.

I had a chance to interview Senior Level Designer Matthew Berger during my time at Blizzcon and we discussed a couple of the new elements being implemented in the PlayStation 4 version. The games features are broken down as follows.

GAME FEATURES:
â¦ The complete adventures of Act I-V, which takes players from the besieged town of New Tristram to the ancient halls of the Pandemonium Fortress
â¦ Six powerful character classes to choose from: Barbarian, Demon Hunter, Monk, Witch Doctor, Wizard, and the all-new Crusader
â¦ Newly designed loot system and offline gameplay mode designed to take advantage of the fast-paced action of the console platform
â¦ Hardcore mode for players who seek the thrill of constant peril that comes with the possibility of permanent death for their character
â¦ Direct character control and new DUALSHOCKÂ®4 functionality such as color-coded player indicators for same-screen coop and touch pad shortcuts to keep players in the action
â¦ Seamless cooperative play featuring four-player online co-op and four-player local co-op games
â¦ PlayStationÂ® Network support, which will allow you to connect with friends, send game invitations, and access voice chat
â¦ All the new and exciting features coming with Reaper of Soulsâ„¢:
â¦ Customize your heroâ€™s appearance and augment your itemsâ€™ power with a new artisan, the Mystic
â¦ Battle a new menagerie of fiendish monsters slavering for the chance to feast upon Sanctuaryâ€™s heroes
â¦ Never stop exploring with Adventure Mode, where all waypoints are unlockedâ€”the world is your battlefield
â¦ Engage in Nephalem Rifts, formerly known as Loot Runs, to test your mettle in 10-20 minute dungeons consisting of randomized areas, monsters, and bosses
â¦ Take on Bounties for fun and rewarding objective-based challenges

I asked Mr. Berger about PlayStation Vita second screen/remote game play capabilities to which he replied.

It wouldn’t translate as well.. It’s not necessarily the best idea for us to spend time doing that., when there’s better things we can do that would effect every single player of Diablo 3.

This makes no sense as Blizzard community director posted a tweet showing off the remote play capabilities.