Prepare yourself for another journey through series of new worlds, featuring multiple challenges with many ways to pass a level and resolve puzzles. Highly tactical, completely addictive, A-MEN 2 is easy to play but still hard to master. Did you miss our special division? Guess what? It’s back in A-men 2! A-MEN 2, continuation of well-received military strategy for PlayStationÂ®Vita system/ PlayStationÂ®3 system, which allows you to hang out with your good, old friends once more. Atom, Antler, Anaconda, Aurelius and Aardvark are ready and waiting to destroy hordes of A-Droids again. So don’t let them wait! A-MEN 2 is bringing you four brand new worlds full of enemies, traps and puzzles. Also our brave soldiers got some new skills. You’re not convinced? You said that A-MEN part one was so easy? Try us! A-MEN 2 will give you more challenges than you expect. So don’t be afraid and put our troopers in action.

â€¢ Brand new character skills â€“ Spy; disarm droids when sneaking from behind. Engineer; able to disarm landmines. Private; can pick up disarmed landmines and place them in different locations. Commando; can use jetpacks to reach new locations. Muscleman; can both intimidate and taunt enemies.

â€¢ Three new worlds â€“ Night Missions, Suburbs, Hidden Labs. Each much larger and more complex than the levels in the original game.

â€¢ Bigger & tougher â€“ more challenging than the first game with at least 20 hours needed to complete it.

The premise for A-Men 2 is very simple: take your team from their starting positions all the way to the helicopter that will allow them to escape, but the execution is anything but. This game channels puzzle/platforming games of ages past, particularly the difficulty and gameplay mechanics of Lost Vikings.

In A-Men 2, you learn as you go since trial and error is how things are handled. You will find some questions marks which can be activated to provide hints, tips and information on how to do things right, but the bulk of the game has you figuring out a solution to all the puzzles that stand in your way between Point A and the escape Chopper.

Since each character has unique skills and abilities, they must all be used at one point of each level to open a path for the other members of the team, which is why when one team member is killed, you must restart the level. It’s a good thing the game has save spots where you can record your actions since starting a level 5-10 times all the way from the start would be cruel. It will take you about 4-5 levels to get the hang of things since the first set of stages feel like a big tutorial that raises and lowers the difficulty to introduce new items, characters or hazards.

Your actions in A-Men 2 will earn you some money, and you can spend this at the in-game shop to unlock some cosmetic changes to the characters (different colored clothes and such) or to upgrade their abilities (a much better use for your hard [really hard] earned cash). Take, for example, the image below: having the Private start with an extra two bullets is a HUGE game changer, and something you should aim for through the game in order to score high for each level. 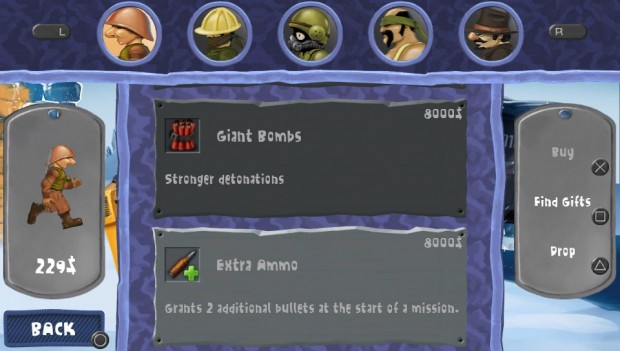 Speaking of that, each level has some extra goals you can aim for (such as quickly killing an enemy, finishing the level under a target time or not using a skill, to name a few) which add an extra challenge on top of the regular layer of “hard as nails” gaming ahead of you.

As a final bullet point, A-Men 2 is a Cross-Buy game, which means that $9.99 gets you both the Vita and the PS3 versions with a single purchase.

A-Men 2 is a fun but hard platforming/puzzle game that takes “trial and error” to heart. You will die hundreds of times before you finish the first set of levels in the game, and you will like it. Other than the floaty jump mechanic and a bit of slowdown in a couple of levels, A-Men 2 is a game for gamers that like a challenge.

This review is based on a copy of A-Men 2 provided by Bloober Team.