BIT.TRIP Presents… Runner2: Future Legend of Rhythm Alien is the sequel to the critically acclaimed and IGF award-winning BIT.TRIP RUNNER.

In the style of the BIT.TRIP series, Runner2 is a rhythm-music platforming game. Players will run through fantastic environments, using brand-new moves, to brand-new soundtracks as they run, jump, slide, kick, and soar toward the goal of tracking down the Timbletot and thwarting his evil plans to destroy not only our world, but every world there is.

BIT.TRIP Presents… Runner2: Future Legend of Rhythm Alien(which from here on out I will refer to as Runner2) is a great game, and a great take on the endless runner genre. It takes the gameplay that was endless and creates bite sized levels that make it into a full game. On top of that, it also manages to add the variety that most of those games are missing.

The game play is simple: you must make your character run through the whole level. You eventually also unlock and have access to jump, slide, kick, dance, and block skills to avoid dying and make it to the end of the level in one piece. Each of these ability are tied to a button, and you need to have lightning-quick reflexes to navigate each level. While running in each level, your goal is to collect all the gold in one go because collecting gold will help to unlock other levels within that world. As you progress through each level, you will also receive points for avoiding enemies and collecting items, and there are online leaderboards to make it easy to compare you score to other players, so you can continue to try to have the highest score. 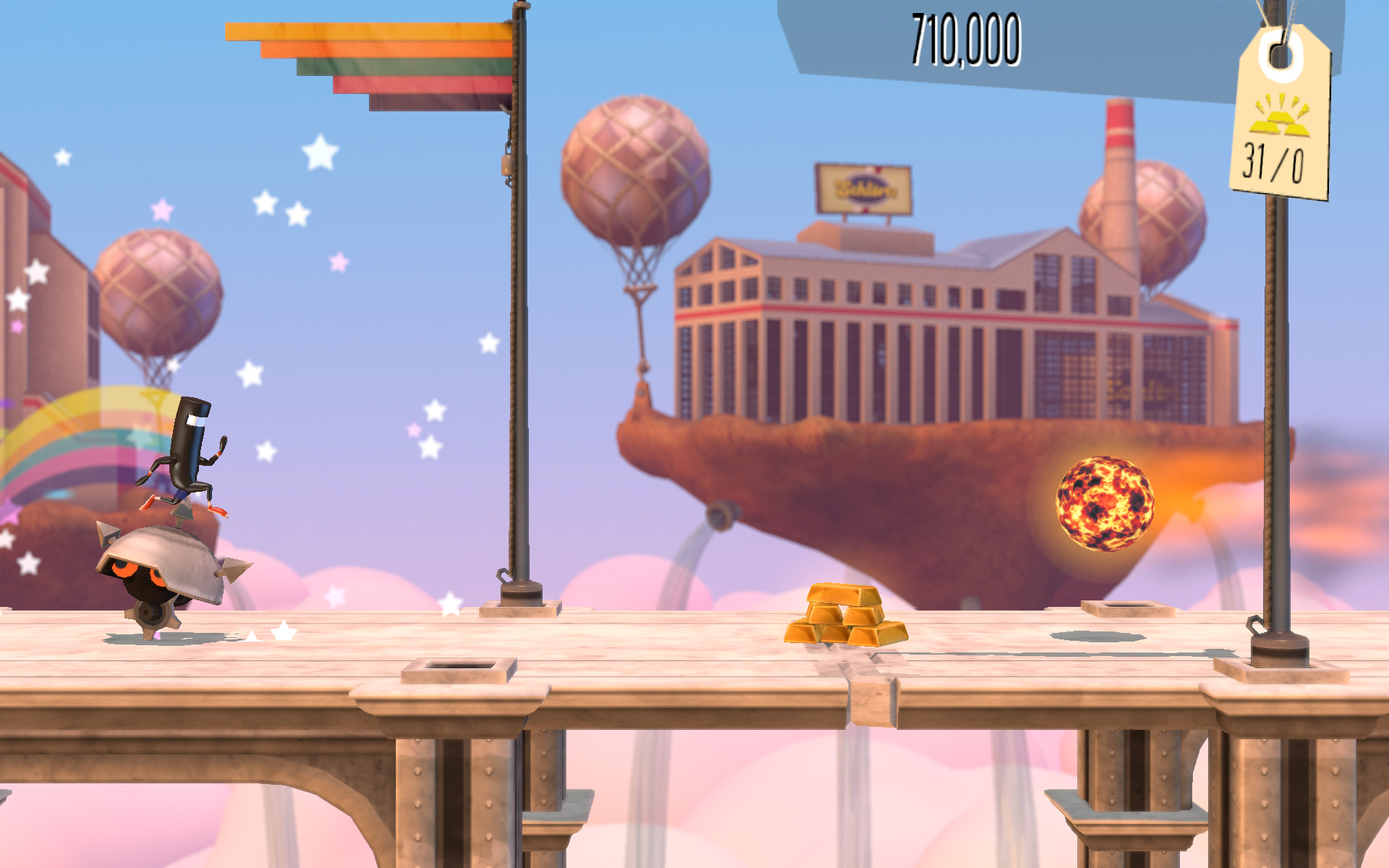 There are 5 worlds for you to explore, with multiple levels in each one. Every level feels completely different, and they will introduce you to different game play mechanics as you play through them. There are also branching paths that often lead to chests or secret exits as well really giving some solid replay value. Each of the 5 worlds has a completely different theme, and you will be running through the clouds, above the water on boardwalks, through the forest, in a polluted factory, and even in space where everything has an 8-bit look while being presented in 3-D. Something nice is that all of the worlds have completely different character models for you to see, making each one feel special.

There are also unlockable characters within the game, bringing some choice and variety to the table. You start with Commander Video and Commandgirl Video, but you will soon unlock Unkle Dill, Reverse Merman, Whetfahrt Cheeseborger, Pitazo, and Captian Video. You will unlock one in each world and, while they all play the same, it’s fun to try them all for a different vibe. As mentioned before, when going through the level you can find chests (which must be unlocked) and they include new costumes for the characters, thus changing their appearance. Every time I unlocked a new chest I would check the new costume and play with it, and it really made me seek out those chests, even if they’re featured on harder paths in the game. 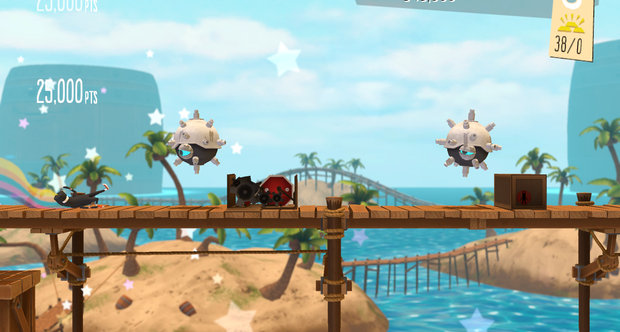 The music is awesome, and you should definitely wear a pair of headphones when playing on the Vita. There are cues for your actions in the music, and if you can keep with the rhythm, it will help you get throughout the level.

Runner2 is a great fit on the Vita. It’s also available on PS3, and you may even have it as a free game from PS+, but I felt it got lost in the shuffle there. The Vita is the perfect platform for it as people tend to play in shorter spurts and feel more accomplished when you get a few levels completed before turning off the game. There is no Cross Save or Cross buy with this version, but it does give you access to completely separate trophy list and leaderboards, so if you got all of the trophies on PS3, you can play them again on the Vita. 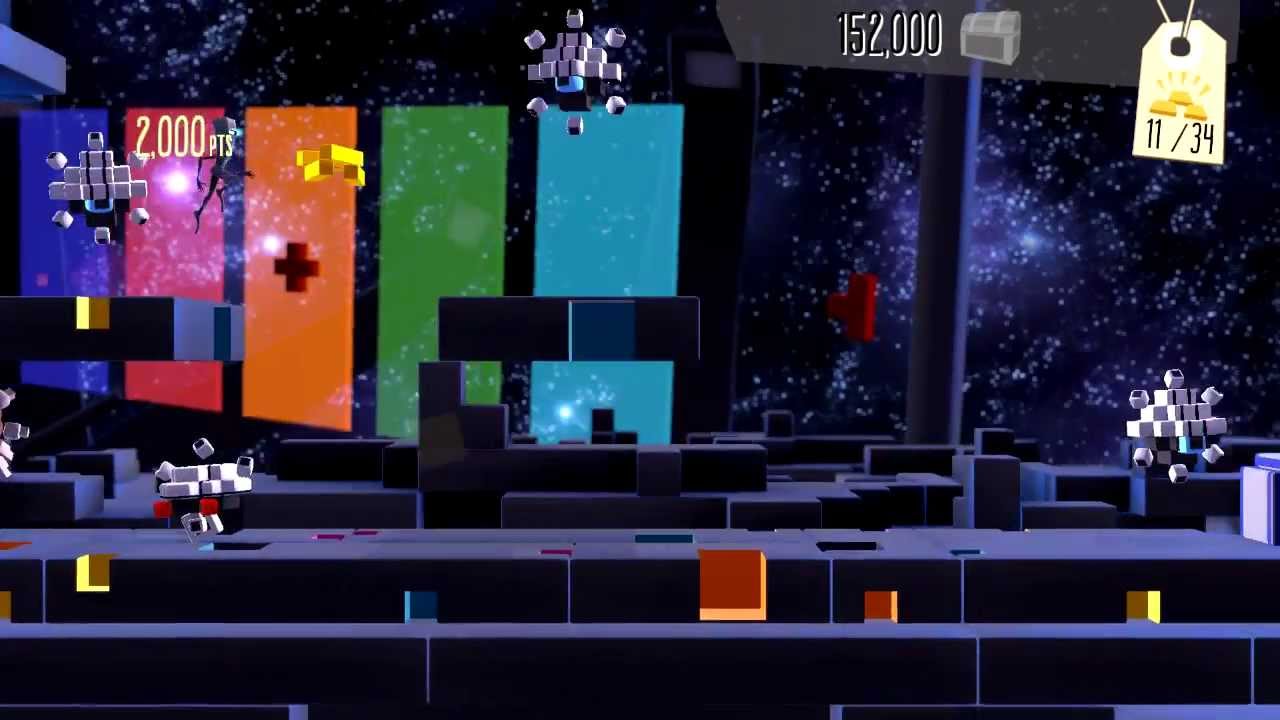 Runner2 is a game that is completely worth your time and attention. There were times when I wanted to throw my Vita, but I persevered and got the satisfaction of beating a particularly tricky level here and there. I really enjoyed scouring it’s depths to unlock all characters and costumes and to achieve a high-score. If you own a Vita I heavily recommend picking it up, you will not be disappointed.

This pack adds 6 characters to the mix most from other indie games. It includes Josef (Machinarium), Spelunky Guy (Spelunky), Raz (Psychonauts), Dr. Fetus (Super Meat Boy), Quote (Cave Story), and Invisible CommanderVideo. Like the other characters in the game, each has their own running style pulled from the game that they are from. It’s great to see Josef duck down just like he does in Machinarium, and the Spelunky Guy running through the level with his whip. If you want to add another level of challenge you can always select Invisible Commander Video. He is see-through, and you can barely see him on the screen, which makes the game incredibly difficult. There was a lot of love here, and you can tell from how each of the characters was brought to life. Do yourself a favor: download and play this with the game, since your $3 adds some cool characters to the game.

You can purchase BIT.TRIP Presents… Runner2: Future Legend of Rhythm Alien from the PSN

This review is based on a copy of BIT.TRIP Presents… Runner2: Future Legend of Rhythm Alien provided by Gaijin Games.