Mickey Mouse returns to star in Castle of Illusion, a fantastical re-imagining of the Sega Genesis classic. With all-new HD graphics and gameplay, Castle of Illusion brings Mickey and his world to life in this magical Disney adventure! When the evil witch Mizrabel kidnaps Minnie, itâ€™s up to Mickey to brave the dangers of the Castle of Illusion to rescue Minnie. Gather your courage and traverse enchanted forests, take on hordes of rebellious toys and navigate mazes of living books. Play as Mickey and save Minnie from Mizrabelâ€™s evil clutches!

Castle of Illusion Starring Mickey Mouse is a remake of a Sega Genesis/Mega Drive classic. Since I was a Nintendo kid, I never got a chance to play the original, but I remember hearing the praises of the game on the school yard from all the Sega Kids. This is the second Disney remake this year after Ducktales Remastered. I felt Ducktales played it safe since, for the most part, it was a fairly standard remake (aside from some extra content at the start). However, Castle of Illusion does re-imagine the levels and the boss fights so it will seem different than the game you used to play.

Minnie has been captured by the evil Mizrabel, and your job as Mickey is to enter the Castle of Illusion and save her, and the story follows a familiar trope in gaming where you have to rescue a damsel in distress. The Castle of Illusion acts as a hub world, and you can choose to go through doors that will take you to different areas. Think Super Mario 64 in terms of setup, but without the scope.

The game is part sidescroller/part 3-D overhead game. The game will spend most of the time in a 2-D plane, but there are certain parts of the level that will switch to a 3-D overhead view. Mickey can jump and throw projectiles to defeat enemies or traverse the environment. 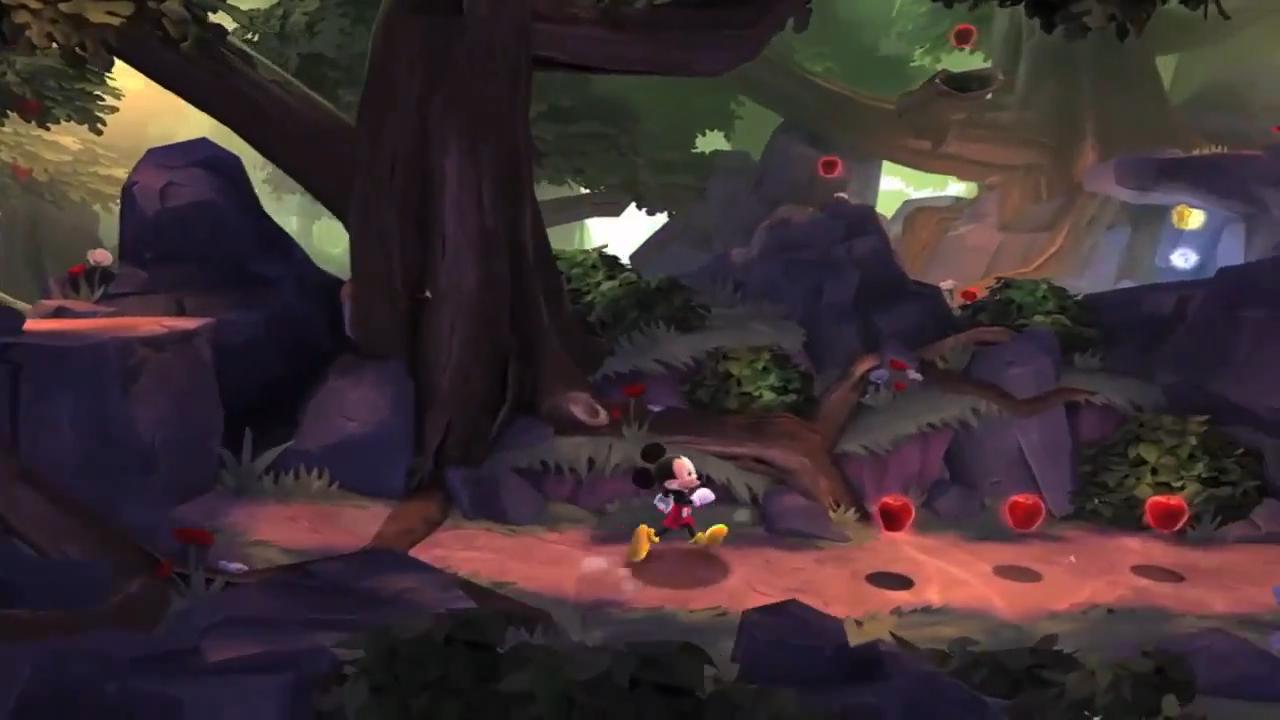 There are 5 worlds for Mickey to explore. Each world has 3 parts, 2 main levels to play through and a boss level. As a huge plus, each of the worlds are vastly different from each other: a forest, a library, an ancient temple, or a land made of candy and sweets. On top of that, the levels are laid out really well and make exploring them fun.

I found the controls for the game a bit frustrating. Jumping felt floaty, reminding me of Little Big Planet, but less exact. There were times when I made jumps the same way and got different results. This is a problem when you have to jump on enemies or platforms to reach hard to get items. It was fine for the first playthrough, but going back for collectibles seemed like a chore when replaying the levels. 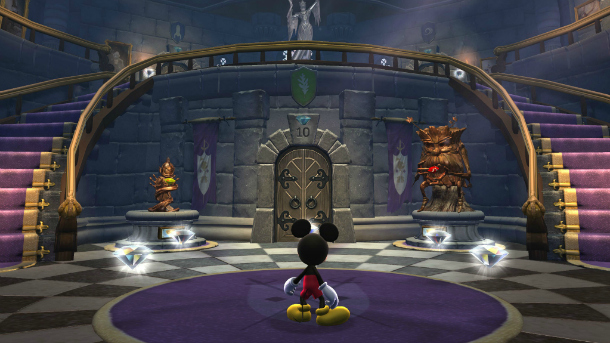 The game is very pretty. Mickey and his the enemies look great, and the worlds are beautiful. They did a great job updating the game for this generation, and the game’s story is told through single drawn panels that look nice. That being said, this is a game based on a classic cartoon character, and therefore I would have liked to see fully animated cut scenes.

The music and sound in the game are great as well. There is even a narrator who fills in the story, not just in the opening panels, but throughout the game. As you enter levels, he will continue the story, which is a nice extra. The music really adds to the level, and all of the sounds are unique and distinctive. 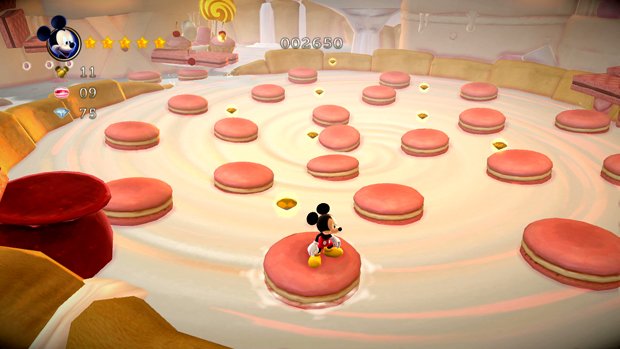 The game doesn’t take long to beat. I think I finished it in about 2-3 hours at most. You can spend some time afterwards redoing the levels to find all collectibles, which bumps up the total time played. There are 75 diamonds in each level to collect, totaling 800 overall. There are also hidden magic playing cards and Chili Peppers which that, when collected, will unlock extra costumes for Mickey. The difficulty level is really low, so people of all ages should be able to play the game.

Castle of Illusion was a fun game on my first playthrough. Going back to track down all of the collectibles seemed like a chore due to nature of the controls. It looks and sounds great, but I just wish it controlled a little better. If you are looking for a short romp through a fun world then this is the game for you. I will say my 3 year old loves Mickey and he did watch me play the whole game, so if you have younger kids this will be a good game for them as.

Voice over work by the Narrator

This review is based on a PS3 copy of Castle of Illusion Starring Mickey Mouse purchased by the reviewer.

[PS3/Vita Double Review] Stick it to the Man