[PS3/Vita Double Review] Stick it to the Man

Hard hat tester; Ray has a bizarre accident and wakes up with a giant pink spaghetti arm sticking out of his brain! With his awesome new powers, he can read minds and change the world with stickers, but he’s on the run for a crime he didn’t commit. Can you help Ray out of this sticky situation?

Stick it to the Man – Launch Trailer

Poor Ray has a nice enough life when all of a sudden something falls on top of his head, sending him to the hospital… until heâ€™s kicked out because his insurance does not cover head injuries. He soon realizes thereâ€™s a giant hand sticking out of his head which only he can see, and things just get crazier after this.

Turns out that the hand is actually an alien living inside of Rayâ€™s head, which sounds bad at first until you realize it also allows him to read peopleâ€™s minds as well as letting him grab items from their thoughts. 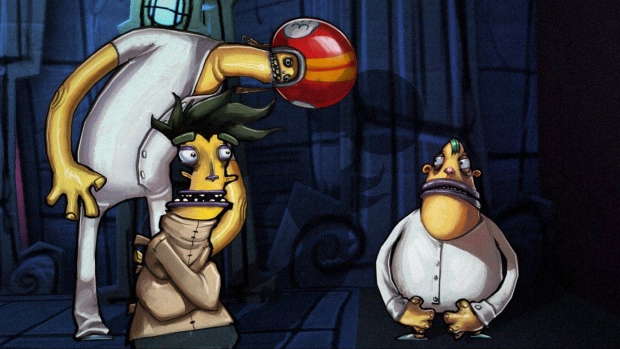 As is to be expected, there was a shady organization after the powers bestowed by this alien, and Rayâ€™s life is changed in a big way.

The writing is great, and it makes the game more fun, especially since every single line of dialog features voice acting. Just how crazy is the story? Well, it takes Ray from having to escape a mental institution on the zombie corpse of a whale to impersonating a Diva on her way to a concert, to going into his own mind to unravel the mystery at hand. See? Crazy! 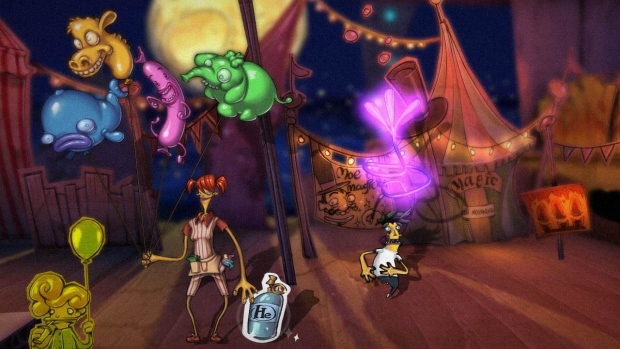 I had a lot of fun with Stick it to the Man and it probably took me a little over 4 hours to finish the game and get every single trophy. I only had to go back to read one mind I had missed (since I could skip all dialog, it took me only 15 minutes or so to do it), and I had to use Chapter Select for a specific trophy that requires you to move without being spotted by a police chopper with a bright spotlight in one of the gameâ€™s Chapters.

Stick it to the Man starts with a pretty silly premise: Ray is a helmet tester (I wonder what kind of school he attended to in order earn THAT diploma) and right at the beginning of the game, he gets knocked down by a falling object that fell from a helicopter (and yes, the helicopter was indeed flying). He awakens later in a hospital and tries to remember what actually happened, and then a giant spaghetti-like purple arm pops out of his head. Our poor “hero” will soon learn that this arm can not only read other people’s thoughts, but can also grab ethereal and corporal objects all over the place. 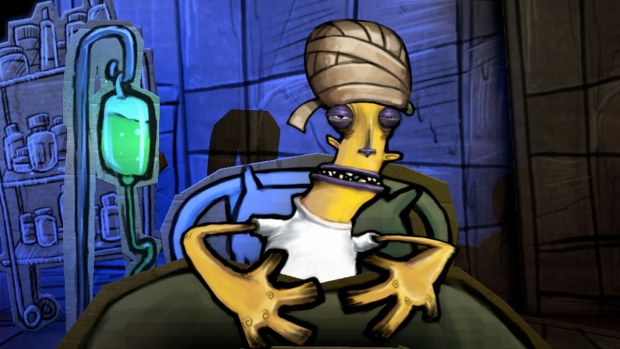 Gameplay-wise, Stick it to the Man is a 2.5D side-scroller that more than once made me feel as if I was in an alternate-reality Simpsonâ€™s universe: every character in the game is weird in a good way! You move Ray around cleverly designed levels while reading peopleâ€™s mind and collecting objects, and there are light puzzles elements because obtaining a new item does not tell you exactly where it goes. The art style is reminiscent of Little Big Planet, with a cartoonish feeling, and it makes you see the paper-like quality of the art style. 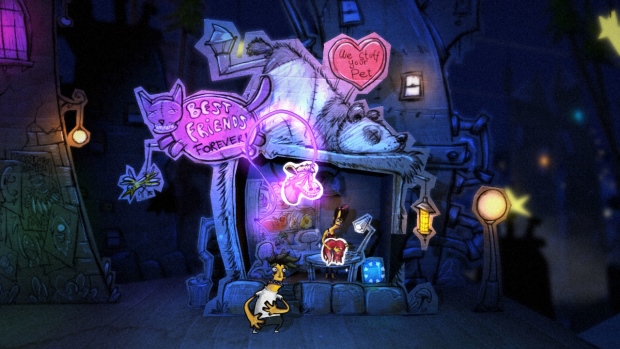 I completed the whole game in a little less than 5 hours, and I liked every moment of it. This is a good surprise because I didn’t know what to expect before playing it: the trailer does not do the game justice! Trophy-wise, technically almost all of them are “missable” but aren’t truly missable since you can use chapter select to go back and get the ones left on your list. EdEN loved the voice acting for the game, but for me there were some characters that I just couldn’t relate to. Not a deal-breaker, but something to consider. 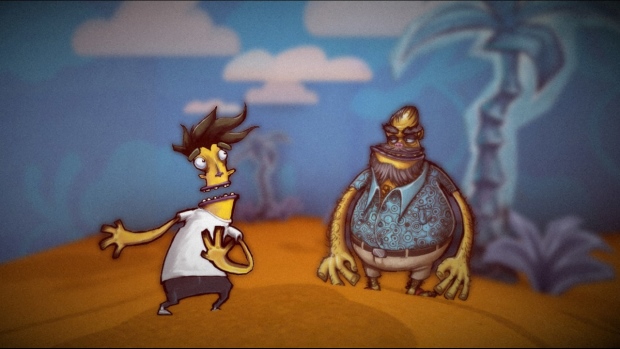 Stick it to the Man is a very fun release with a great art style and funny writing. The game is just the right size for you to enjoy, and it does not overstay its welcome. The fact that itâ€™s a Cross-Buy release just makes thing even better, and it allows you to play it at home or on the go so that you can take this quirky game out for a spin.

*This game is Cross-buy (but not Cross-save) between the PlayStation 3 and the PS Vita.

You can purchase Stick it to the Man from the PSN.