Lock and load through the history of time as wisecracking hero Barry Steakfries, who is looking for nothing more than to shoot some zombies and make it back in time for a hearty dinner. The evil Professor Brains has sent hordes of undead to the furthest reaches of time, but Steakfries wonâ€™t be taking that lying down. Heâ€™ll take it with a gun, a Zombie T-Rex and a whole repertoire of cheesy one-liners!

Age of Zombies is the most recent game to land on the PS Vita from Halfbrick, the development studio behind Jetpack Joyride and Fruit Ninja. In this game, you play as Barry Steakfries and your goal is to shoot down all the zombies which have appeared in many different time periods. This game is also available as a minis release on the PSP (but without trophies), and on iOS and Android platforms.

The game starts when Barry meets the evil mastermind Professor Brains who has created an army of evil zombies, sending them through different periods of time. Barry then decides to follow the zombies through time to get rid of them once and for all. He begins by visiting the Prehistoric era, the 1930â€™s, Ancient Egypt, Ancient Japan, and thenÂ to the Future for the final showdown. 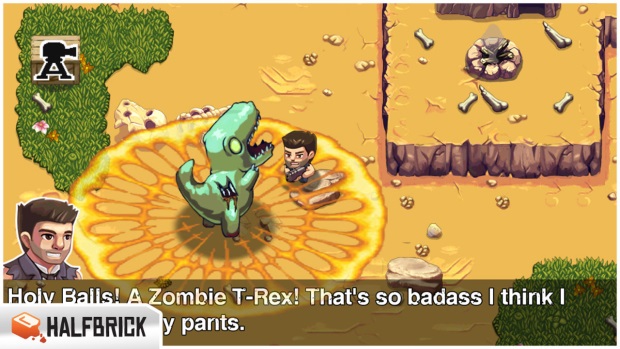 Fighting a zombie T-Rex is cool!

The gameplay in Age of Zombies is very easy to pick up: the left analog stick controls the movement of the main character and the right stick controls the weapon aiming and firing (the weapons auto-fires when the right analog is pressed). The goal is to destroy all the zombies that spawn in each of the levels during several waves. 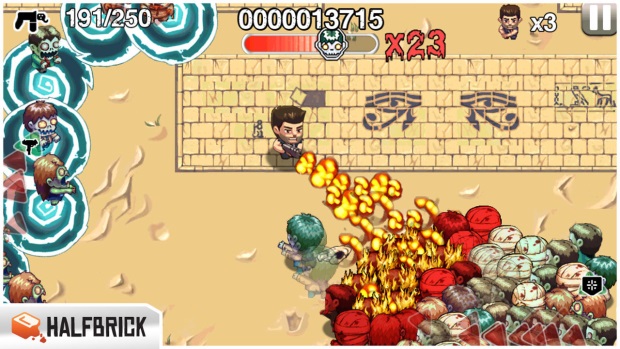 Barry starts with his handy pistol which has unlimited ammo, but he will be able to pick up better weapons with limited ammo as the levels goes by, and using the R1 button can also launch a projectile onto enemies. Super weapons are dropped randomly on the levels, and theyâ€™re always welcome… as long as they drop close to where you are (sometimes while in the heat of a zombie wave, the weapon or power-up that dropped is unreachable, making the wave harder than it should be if the weapon dropped closer to where Barry is standing). Finally, those weapons drops have relatively low ammunition, so they canâ€™t be used for a long time before having to go back to the default pistol. 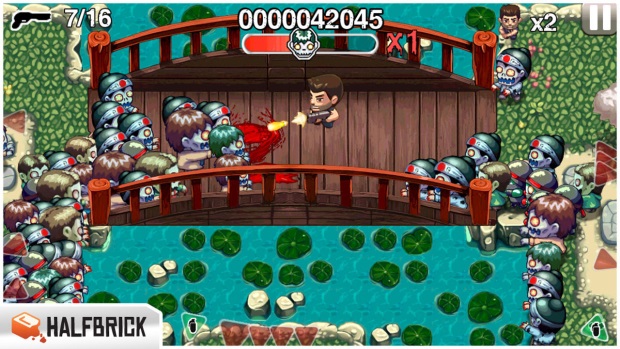 Age of Zombies is a fun game that can be played for short sessions, and has a very short campaign that can be completed in around one hour. Once the game is completed, there are some bonus levels and a Survival mode that can also be played. The super weapons that Barry picks up are cool, and destroying waves of zombies is very satisfying! The game has a relatively progressive difficulty, but the last boss is way harder than it should, and even if I didnâ€™t die once in the main campaign, I didnâ€™t manage to finish the game because of said difficulty spike for the last fight.

You can purchase Age of Zombies from PSN.

This review is based on a retail copy provided by BlitWorks.

Blood of the Werewolf – Coming soon from Midnight City