In Lucifer Ring, you play as Nash, a young warrior, looking to stop the evil wizard Bair from opening the gates of Hell with the powerful Lucifer Rings scattered around the fantasy world of Freisia. Nash will need to hack and slash through fierce monsters like Red Dragons, Minotaurs and the dreaded… Bob… to release the land from the strangling dark clutches plaguing Freisia.

Popular with import game collectors seeking difficult to find games, Lucifer Ring was one of the first 3D beat-â€™em-up games to change up the. With Nashâ€™s trusty blade, you can arm him extra power-ups to vanquish all the foes in his path. Known for its difficulty, this is a brawler will give fans of the genre the challenge.

As you’ve just read, you’re in control of Nash, a warrior out to eradicate the evil from this land, from Dragons to Minotaurs, from Zombies to Harpies, all the way to facing your worst enemy: Bob. The game was created in the mold of classic beat-em-up games of ages past, but with the trusty power of the PSOne and its fancy polygons, shades and low-fi textures… just like we like it!

Lucifer Ring is the second release in MonkeyPaw Games’ Retro Rush extravaganza, of which we’ve already reviewed Double Dragon, and we will soon have a review for The Firemen 2: Pete and Danny (review preview… it’s fun!). 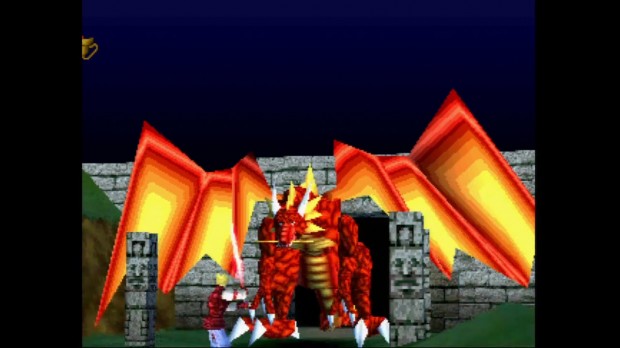 Controls are simple and to the point: one button is used to jump, one is for a weak attack, another one is for a strong attack, and then you have a final button for your special attack which requires that you save some energy on your charge bar (which is filled by attacking enemies or by being hit… repeatedly). For those of you who’ve never imported a PSOne game, I must mention that the Circle button is used to confirm choices, and the X button is used to go back in a menu or cancel. Yeah, this might seem weird at first, but it’s how Japanese gamers do it. If you want to get past this, you can reconfigure the buttons in the special menu for each PSOne Import game (accessed by pressing the home button). 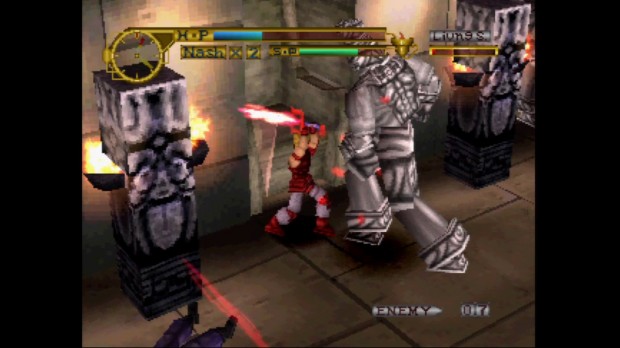 The game itself is short since it only has 5 different areas to explore, but most areas feature small branching paths that take you to a different area where a mighty sword might be guarded in a hard-to-reach treasure chest! There are 5 swords in total (counting the one you start with), and each one is more powerful than the last, or features a special elemental attack that will come in handy for specific levels or sections. It will take you about an hour at most to finish the game, and once you complete it you get to do it again with a nice extra option for selecting the sword you want to use for the level (from those you’ve found during your journey). If you decide to finish it a second time, you will get an extra option to select the exact section from which to start an area, something that comes in handy when trying to find the paths that take you to an area you haven’t found yet. 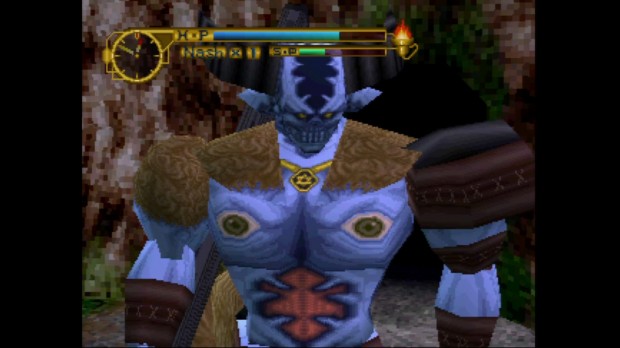 Lucifer Ring is a mindless and fun beat-em-up that was never released outside Japan until MonkeyPaw Games decided to give it one more time under the spotlight. As is the case with ALL beat-em-ups, combat is repetitive, and you get to defeat a lot of the same enemies over and over, but that’s how we like it! The fact that I finished the game twice AND went back to find the missing areas should give you an idea of how much I enjoyed the game.

This review is based on a copy of Lucifer Ring provided by MonkeyPaw Games. 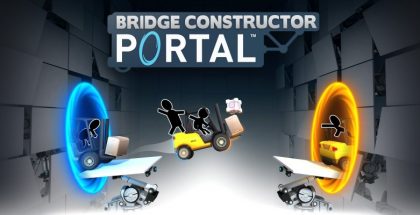