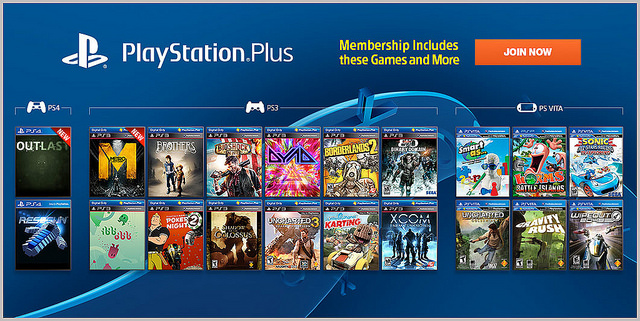 February is starting off strong with a great game from last year for PS3 and a brand new game for PS4. PS+ is such a great value that those without a subscription are missing out on a lot of awesome releases!

Outlast (PS4) No Price Listed Yet; Free for PS Plus members

Hell is an experiment you canâ€™t survive in Outlast, a first-person survival horror game developed by veterans of some of the biggest game franchises in history. As investigative journalist Miles Upshur, explore Mount Massive Asylum and try to survive long enough to discover its terrible secretâ€¦ if you dare.

It is the year 2034. Beneath the ruins of post-apocalyptic Moscow, in the tunnels of the Metro, the remnants of mankind are besieged by deadly threats from outside â€“ and within. Mutants stalk the catacombs beneath the desolate surface, and hunt amidst the poisoned skies above. But rather than stand united, the station-cities of the Metro are locked in a struggle for the ultimate power, a doomsday device from the military vaults of D6. A civil war is stirring that could wipe humanity from the face of the earth forever. As Artyom, burdened by guilt but driven by hope, you hold the key to our survival â€“ the last light in our darkest hour

Not many sales this week:

You can check out the rest of the free games this month here.

This is a great update since we’re getting another brand new free game on PS4, and another huge title from last year on the PS3. What do you think of the games? What are you looking forward to this month? Let us know in the comments below.