Why I’m addicted to PS Vita’s Montezuma Blitz and tips to Score BIG ! 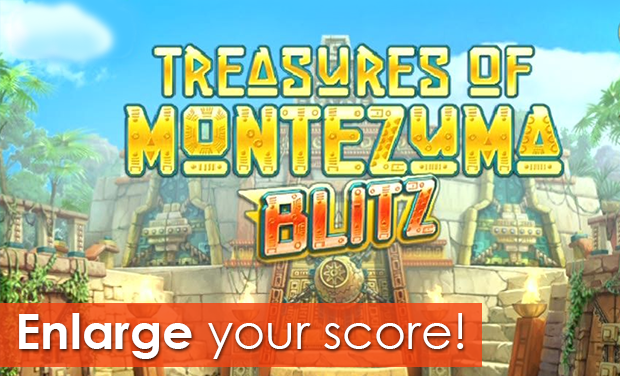 Treasures of Montezuma Blitz is a freemium game on the PS Vita. While at first this seems like just another match-three game (and watching the video below will most probably leave you with that impression), Iâ€™ve been playing this game with a few friends for weeks now, and I am proudly very addicted to this game! If you tried that game back when it was released last year, you have to try it out again since they completely enhanced the gameplay with the recent updates!

In this post, Iâ€™ll explain why Iâ€™m addicted to this game, and I will share with you some strategies on how to collect more crystals and how to reach millions of points!

What is Treasures of Montezuma Blitz ?

Letâ€™s begin with the basics by briefly explaining how this game is played. Put simply, itâ€™s a match-3 puzzle game, in the vein of Bejeweled. After each round, you’re awarded with experience based on how much you scored, and this experience goes towards your game level. Leveling up yields crystals (the digital currency) and better power-ups (runes or totems). Your best weekly score is displayed to your PSN friends in the game, and a small friendly competition runs through the week to determine which one of you will reach the best weekly score. The weekly competition, and reaching very high scores (50+ millions) is mainly what fueled my addiction to Montezuma Blitz!

MASTERING the power-ups (Runes and Totems)

If you want to rival the best players in Montezuma Blitz, you have to master how to use the Runes and the Totems. The runes are activated as soon as their tokens are destroyed in a match, so they usually arenâ€™t an issue. Also, if you break 4 or more tokens at the same time, one of the tokens left in the board will automatically become a bonus (keep that in mind while playing!). Breaking 6 tokens at the same time will enable Kickout mode, in which you can tap the rear pad on the VITA to break tokens.

The Totems are trickier because they are activated only when you manage to chain two token matches of the same color consecutively. This requires a good level of concentration while in the heat of score frenzies and is harder than it seem. Try to focus on activating totems (2 chains of the same color) every time the board is shuffled, and avoid doing a third match of the same color if you canâ€™t complete it with a 4th one, that way you will have an option left if a new chain becomes available. Efficiently triggering the totems is the core way to reach multi-million scores! 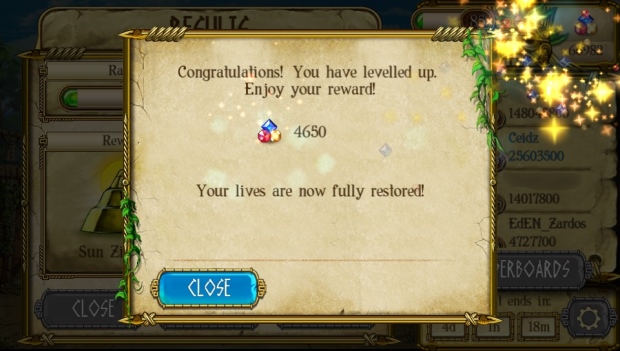 Leveling up at higher levels is a good way to earn Crystals!

How to gain Crystals?

First and foremost, if you start all-out, you will notice that the crystals you are given at the beginning of the game (15k) drain quickly. Montezumaâ€™s crystals can be purchased on the PSN, but letâ€™s explore how you can rack crystals up without purchasing expensive DLC. 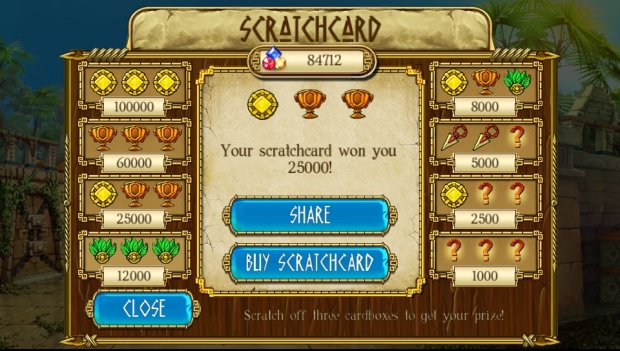 How to score 50+ million points!

Scoring a very high score is highly dependent on what items (runes and totems) you have unlocked, as well as on their level. Since ALL items are completely unlocked at level 70, you will notice that itâ€™s easier to get great scores when you get there, but the same strategies can work even when the items arenâ€™t totally unlocked. But even with the best setup, if the board is â€œunluckyâ€ you will still get bad rounds once in awhile with less than 1 million points. You will know that your strategy works when you have tried it for a few rounds. 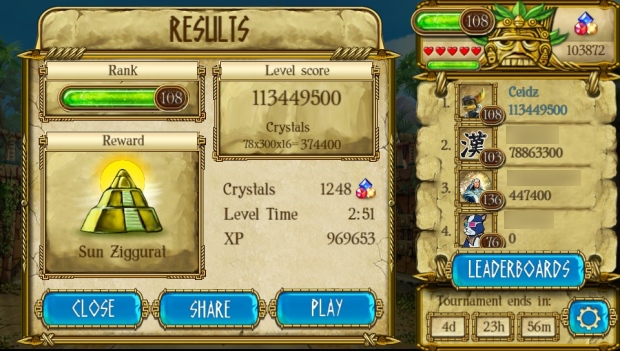 A screenshot of my best game yet: 113 millions points!

Like I said, mastering how the totems works and triggering them as much as you can is THE way to get a good high score. Generally speaking, if your goal is to achieve a high score, you might want to stay away from the dynamite and electricity runes (and the blue or red totems), because when they are triggered, they break away a few tokens on the board, hypothetically preventing you from doing matches that might have been possible.

As far as the gameplay goes, I often alternate between two main item sets. Feel free to take those as a base to devise your own strategies!

Here, the green totem is triggered in conjunction with the Added crystals rune to raise the score multiplier (and it even auto-shuffles the board when activated!), and the purple totem gives you a ton of bonuses on the board (mainly time extenders and combination lookups). The longer frenzy not only extends the frenzy time, but at maximum level it also increases the score multiplier by 5 when itâ€™s activated. The Color Burst rune is also used to shuffle the board, and expect it will be activated very frequently thanks to the bonuses that are added to the board that the purple totem will add to the board.

In that combination, the longer frenzy, green totem and added crystal have the same purpose as before. When the orange totem is triggered, it automatically adds 15 seconds to the level (which means longer rounds), and the Profit crystal rune can give you a pretty awesome end-game bonus if you got a lot of crystals (my personal best bonus was around 15 millions). 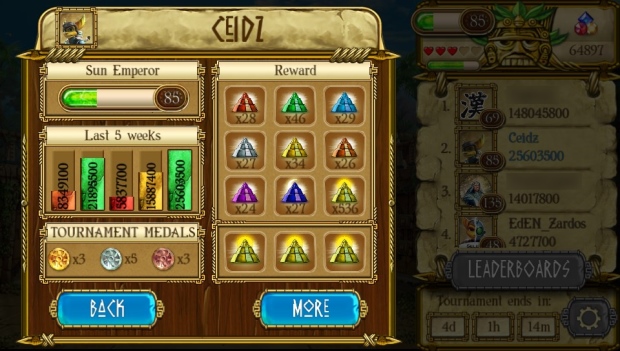 While searching on the Internet for some strategies, I stumbled across a few other ideas that you can try to raise your score.

Montezuma Blitz is an amazing game, and mastering it requires a lot of patience and practice! If you have a Playstation Vita, you shouldnâ€™t pass this game, since itâ€™s FREE! With the strategies I explained in this post, you can expect to have an average game in the 10 millions-range, and a good game will certainly be closer to 50 millions.

You can download Treasures of Montezuma Blitz from the PSN.

Dismissing Products Based on Battery Life: Justified or Are We Asking Too Much?... September 22, 2011 | Eddie