Likable characters and a story rife with adventure! With a wide range of unique and quirky personalities, the entire cast of Monster Monpiece adds a little spice to the adventurous story from beginning to end! While the battle system seems simple, you still need a strategic mind to best utilize your Monster Girlâ€™s Skills and Potentials in battle! You will be fighting on a 7 x 3 grid based battlefield and by summoning various monster girl cards. Each player will take turns drawing from their play deck.

Monster Monpiece is the latest game from Idea Factory and Compile Heart, which brought us the Hyperdimension Neptunia and Record of Agarest War series. In Monster Monpiece, humans are sharing the world with gentle Monster Girls, who take part in fights on your side. Monster Girls however can sometimes become â€œLostâ€ and become a threat to humanity, so you will have to get rid of them!

To be honest, I really didnâ€™t know what to expect from Monster Monpiece when I first booted the game. Apart from knowing that it is a RPG, and having heard about the the advertised â€œrubbingâ€ system in which you have to furiously touch the Vitaâ€™s screen to make the monster girls to give them extra powers (ahem), I knew next to nothing about it. Well, it turns out that I can now affirm that this is one of the best original Vita games of the year yet!

The story of Monster Monpiece revolves at first around May and her friends getting through their world to rid the world of the already mentioned Lost Monster Girls, but the crisis quickly extends to regular humans being turned into Lost Monsters. The story itself is not that original, but the gameplay makes this game shine! 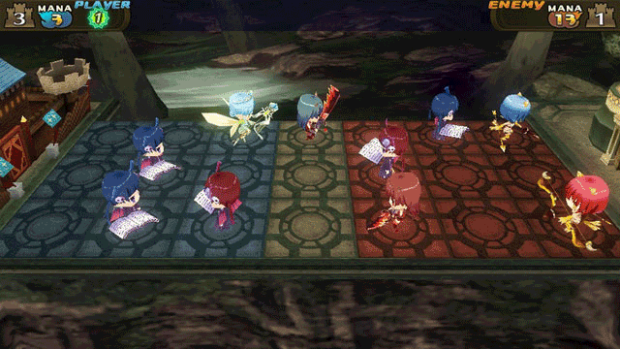 The game’s battle board

At its core, Monster Monpiece is a pokémon-catch-them-all / RPG crawler hybrid, in which you must collect monster girls cards (battle units), and bring them on the battlefield, which is a 7 x 3 grid (see screenshot above). The 3 x 3 on your left is your side, and you can drop a unit (card) anywhere on your sector each turn (as long as you have enough mana). Once you’re done, all of your units (except the one that has just been dropped – with some exceptions) will advance one step and hit whatever is in front of them (regardless of whoever is on their sides). Of course, your enemies have the same goal as you, so donâ€™t expect this to be that easy! You win a match when you manage to deal enough points of damage to the opposing team’s base, and each time an enemy base is hit, the offending unit will die from the attack, which means that you always have to keep some extra units ready. 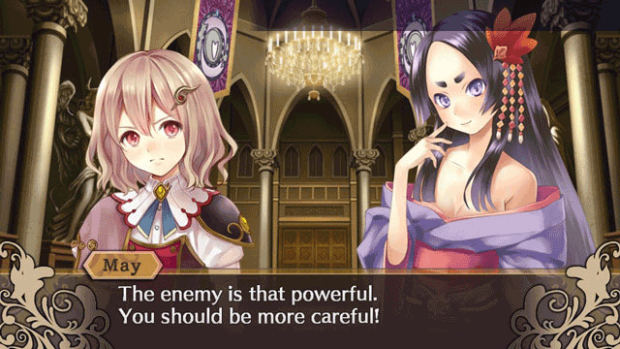 Out of all that Monster Monpiece offers, I love how deep and accessible the battle system was designed. For instance, you can fuse units on the fly when dropping a unit of the same class over one that is already on the battlefield. When this is done, the stats (HP, MP and Attack power) of the new unit is added to the remaining stats of the host unit. This new unit will be a lot more powerful than a normal one, but has the disadvantage of leaving you with potentially one less unit than the opposing team, but can also save one unit on the verge of death by giving it more HP! Fusing and deaths do not carry over to subsequent fights so you can fight to your heart’s content in each battle. Finally, each unit (regardless of their class) has an aura represented by a color, and summoning two or three units in a row of the same color will subsequently yield some pretty good bonus which can turn the tide of the battle. 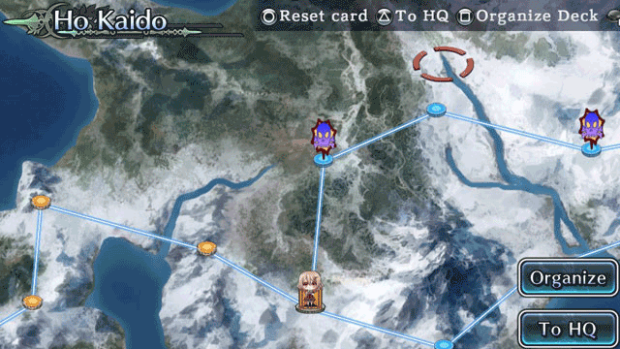 One of the overworld maps

Like I mentioned earlier, the most advertised feature of Monster Monpiece is the â€œRubbingâ€ minigame in which you can permanently increase the stats of some cards by rubbing, pinching and tapping all-out the screen of the Vita by looking for the unit’s “weak spots.” While this will definitively be a selling factor to some people, I thought that it was some unnecessary fan-service, and is not as fun as I originally thought it would be. In fact, I was even happy that it’s not mandatory per-se, and I confirm that furiously rubbing your units while in bed right next to your wife is awkward. 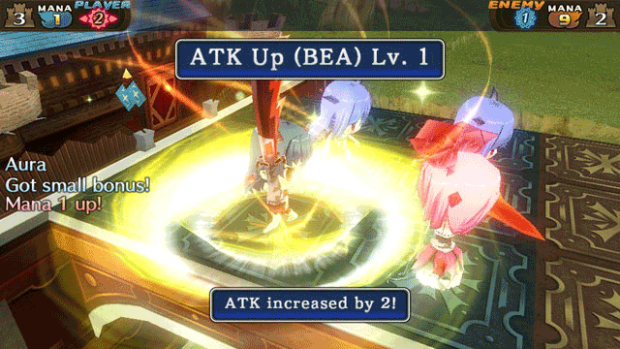 I loved playing through Monster Monpiece thanks to its battle system and card collecting nature. The game is addictive and a great surprise since I didnâ€™t know what to expect. I am a little disappointed by the lack of English voice-overs (the game is only voiced in Japanese, and subtitled in English), but its still a lot of fun to play! On top of this, there is also an online mode in which you can fight other players around to world, and I’ve already fought more than 10 fights while online and the game is still very fun, and doing this helps you learn new strategies since you’ll probably run into decks with cards you hadn’t seen before. Finally, this game is available at a budget price on Vita for only $29.99 instead of the regular $39.99 price tag.

You can purchase Monster Monpiece from the PSN.

This review is based on a digital copy provided by Idea Factory International.